Liverpool lock horns with Man United on Sunday, as the Reds look to maintain their unbeaten Premier League start and rub salt into their rivals’ wounds.

If Liverpool’s season was going superbly last weekend, their midweek heroics have made it an almost-perfect start.

Jurgen Klopp‘s side produced a dominant performance in the 1-0 win over Napoli, reaching the Champions League knockout stages in thrilling fashion.

The Reds can now focus solely on domestic action until February and few matches come any bigger than Sunday’s.

Man United head to Anfield a shadow of the side that dominated the English game for 20 years—Liverpool have not been so superior to their adversaries since the 1980s.

Jose Mourinho has an excellent record against Liverpool, however, and he would love nothing more than to end their unbeaten run and let the whole world know about it.

On paper, Klopp’s men look to be too strong, especially when comparing the positive atmosphere at the club and United’s current malaise, but form can often go out of the window in this game.

It remains English football’s greatest fixture, regardless of where both teams are in the table, and it is never short on drama and controversy.

This is the latest in a run of awkward matches for the Reds; if they can overcome this hurdle it will complete an impressive quintet of quickfire wins against Everton, Burnley, Bournemouth, Napoli and United.

The injury problems are starting to mount up for Klopp, with Joel Matip sidelined for six weeks with a shoulder injury and Trent Alexander-Arnold also out with an ankle problem.

Klopp is going to have to shuffle his pack because of this defensive injury crisis, with James Milner or Fabinho likely to fill in at right-back.

Nathaniel Clyne is an option having returned to training, but he is unlikely to be risked in a match of such magnitude.

Dejan Lovren should be fit to partner Virgil van Dijk at centre-back, while Jordan Henderson, Gini Wijnaldum and Naby Keita will be hoping to start in midfield.

Xherdan Shaqiri didn’t feature against Napoli and could come in, but with Mohamed Salah, Sadio Mane and Roberto Firmino all available, the Swiss international may have to make do with a place on the substitutes’ bench.

Mourinho confirmed earlier in the week that English trio Ashley Young, Jesse Lingard and Marcus Rashford will all start at Anfield.

Last 5 at home to Man United (All Competitions) 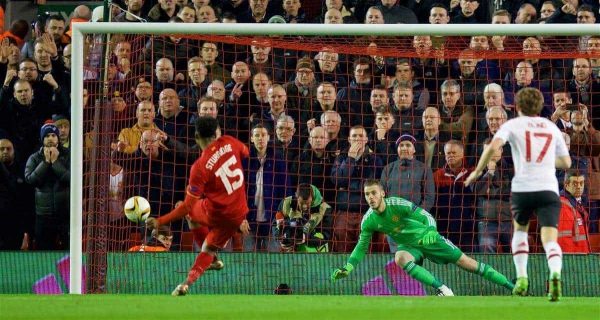 In the five years since Alex Ferguson left United, the Reds have won just twice in 10 Premier League meetings against them—once at home and once away.

Both of those victories came during David Moyes’ doomed spell at Old Trafford in 2013/14, with Daniel Sturridge scoring the only goal at Anfield and Steven Gerrard netting two penalties—he also missed one—in a 3-0 triumph in Manchester.

There was also the Europa League success in 2015/16, however, with Liverpool running out 3-1 winners on aggregate.

Speaking to reporters, Klopp confirmed that Clyne is available, saying he isn’t without options at right-back despite Alexander-Arnold’s absence:

“He (Clyne) has been in training for four days – is he ready for 90 minutes? I don’t know. But he is ready. He is a very experienced player.

“We have other options as well so we will not push Clyney through after his longest spell of training.

“Rafa Camacho played outstandingly in pre-season and even Curtis Jones played (at right-back) against United (in Ann Arbor).

“As long as we have options everything is fine.”

Liverpool vs. Man United is live on Sky Sports Main Event from 3.30pm (GMT), with kickoff at 4pm.

Chris Williams is in the hot-seat for This is Anfield’s live blog from 3.15pm, as he looks to provide more entertainment than a Mourinho performance!