Jurgen Klopp is set to make changes as Liverpool host Watford and faces an interesting task in rebuilding the attack if Roberto Firmino misses out.

A huge week in the pursuit of the Premier League title continues with a must-win game against the Hornets.

After a tough trip to Old Trafford and with the Goodison derby up next, Klopp is likely to make changes to keep things fresh while looking to spark an improvement in his side’s attacking play.

Speaking in his pre-match press conference, Klopp issued a positive update on Firmino’s ankle injury, confirming that it is not anything serious.

But the Brazilian could yet miss out on Wednesday’s game, which would give Klopp a crucial task in finding the right balance in midfield and attack to get the Reds’ firing again.

So how could the boss do that and what could Liverpool’s starting XI look like?

Klopp said that Firmino could yet be available against Watford, but it would be no surprise if the No.9 was left out to recover for Sunday’s Goodison Park derby.

More good news is that Naby Keita should be available despite having been ill, and the Guinean is in contention to start having gone unused at Old Trafford.

There is no change with the known absentees, with Dejan Lovren, Joe Gomez, Alex Oxlade-Chamberlain and Rhian Brewster all still out.

Klopp is likely to make a few adjustments throughout his team.

Trent Alexander-Arnold is poised for a recall at right-back after James Milner’s surprise inclusion against Man United.

There are several options at the German’s disposal should he need to fill a Firmino-shaped void in attack.

Xherdan Shaqiri, Divock Origi and Daniel Sturridge will all be hoping for the nod, while Adam Lallana offers another alternative.

Possible Lineups vs. The Hornets

This is a must-win game for Liverpool and a more adventurous and creative lineup has to feature at Anfield.

Firmino seems likely to miss out despite Klopp’s positivity on the Brazilian’s fitness, and that opens a selection headache in how to reshape the attack.

Sturridge failed to take his chance deputising at Old Trafford, while Origi is seemingly viewed as a last resort currently.

Therefore, the most likely and suitable reshuffle would be for Shaqiri to come in on the right, with Mohamed Salah moving centrally to play as an out-and-out striker.

It is also vital that the Reds have greater creativity and supply to the front line from deeper areas.

This could see Keita restored to midfield to provide it – with Jordan Henderson making way – thus re-forming what is arguably Liverpool’s strongest central unit.

Meanwhile, Alexander-Arnold’s productivity from right-back was sorely missed at Old Trafford and the Scouser should be in from the start here.

That would see three changes made and this attack-minded lineup deployed: 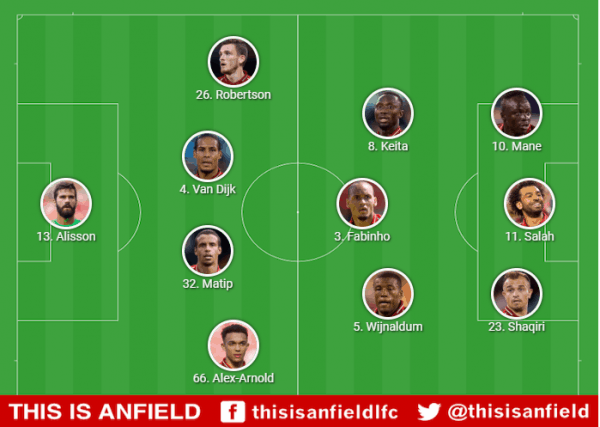 Klopp could go with an even more offensive XI to take the game to the Hornets, which could be done with a switch to 4-2-3-1.

Using this formation would allow for an extra attacker to increase creativity and goal-threat, which would be needed if Firmino does indeed miss out.

The attacking midfield unit could be formed by Shaqiri and Sadio Mane on the flanks and Sturridge in the No.10 role supporting Salah.

Deploying Sturridge here is much more suitable to his play-making qualities and would allow Salah to focus solely on finding goal-scoring opportunities.

It also presents an ideal chance for Sturridge to play his way into form ahead of the run-in, in which his contributions from the bench could be crucial.

A two-man midfield would therefore be in operation and Fabinho and Wijnaldum could be the pairing – especially if Keita needs a chance to recuperate ahead of the derby. 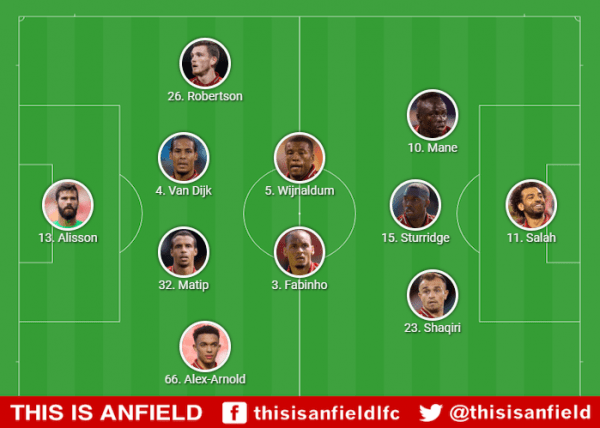 Should Firmino miss out, as we expect, Klopp does have options to make his side a more threatening unit overall with plenty of creativity to introduce in midfield and attack.

The first of the suggested lineups seems the more likely route for the German to take, and it would certainly give Liverpool the necessary firepower to claim a vital three points at Anfield.