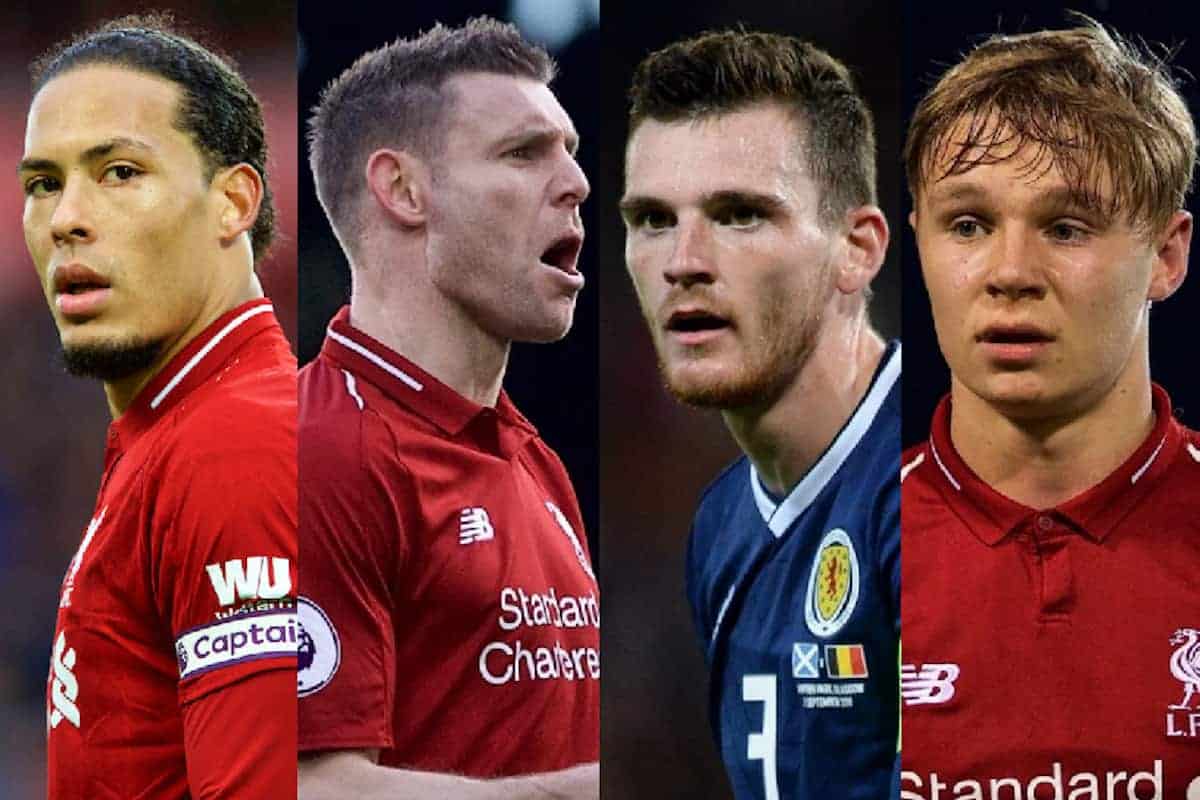 We round up the latest Liverpool news and transfer rumours on Monday, following the crucial 2-1 victory at Fulham.

Fortunately, the 27-year-old’s blushes were saved when James Milner scored a late winning penalty, taking the Reds top of the Premier League.

Speaking to the press about his international captain, Netherlands boss Ronald Koeman said he has no concerns about his mistake:

“[Virgil] showed he’s also just a human who can make a mistake. It happens in football. Luckily they got a penalty.

“We know each other well, he’s having a fantastic season.”

Van Dijk will lead out Holland in their two upcoming Euro 2020 qualifiers against Belarus (March 21) and Germany (March 24).

Andy Robertson is likely to miss Scotland’s clash with Kazakhstan on Thursday, due to requiring dental surgery on an abscess.

Despite this, the left-back is taking every measure to ensure he is still in contention for the clash in Astana, as assistant manager Peter Grant explained on Monday:

“It’s a big blow. We were prepared for it obviously, before the game on Sunday we knew he was struggling a little bit but he wanted to play.

“And the way he is, he is still desperate to play and still trying to get himself back out here as well.

“That’s the way Andy Robertson is, that’s why the manager selected him to be his captain, because he is determined to play for his country.”

However, Grant provided more information on Robertson’s operation, describing it as “one of the worst problems you can have,” before adding that a further check will be made later today, and they would “take it from there.”

It’s not too often that Gary Neville says positive things about Liverpool, so we should make the most of it!

Speaking on the Gary Neville podcast, the former Man United defender believes the Fulham victory was key in the Premier League title race, in terms of keeping the pressure on Man City:

“They’ll have known that was a big moment.

“There will be times where Liverpool drop points before the end of the season, so too will Manchester City I think, but it couldn’t be on Sunday against Fulham.

“Manchester City’s game in hand is at Manchester United, at Old Trafford, on April 24.

“There’s an opportunity for Liverpool here to step clear, with City not catching up for a few weeks, with the added complication of an FA Cup semi-final too. It’s a good thing for Liverpool, I believe.

“They had to win today. It wasn’t vintage Liverpool, after the week they’ve had, it would have taken a lot out of them.

“To get the victory was big.”

Dropped points at Craven Cottage could have been fatal but Liverpool dug deep and showcased their winning mentality once again, not least the nerveless Milner.

While many expected Liverpool to cruise past 19th-placed Fulham, recent results after big European away matches show it was no great surprise.

Highlighted by analyst Andrew Beasley in his column for the Liverpool Echo, the Reds have prevailed just four times in their last 18 attempts after being on their European travels in midweek, in the last 16 of a competition or later.

That suggests fatigue arguably played a part against the Cottagers, with Liverpool never quite at their free-flowing best.

Dropped points also occurred after the Champions League last-16 first leg at home to Bayern, with a frustrating 0-0 draw taking place away to United.

Paul Glatzel is enjoying a stunning season, captaining the Liverpool U18s to the FA Youth Cup final with two goals in Sunday’s 2-1 win over Watford, bringing his tally to 28 in all competitions.

His aforementioned double at Anfield at the weekend was the latest show of brilliance from the striker, who was overjoyed after the game.

“We’ve come here trying to get to the next round and we wanted to put in a performance for ourselves that we can be proud of and I think we have done that.

“We played well and got the result, which is the main thing, and we have the Youth Cup final to look forward to.

“We have all looked forward to it [playing at Anfield] for a long time now. The day has come, and everybody has performed and that’s what we needed to do. We are all proud.”

The young Reds will play either West Brom or Man City in the final, with their semi-final set for April 1.