Alex Oxlade-Chamberlain has outlined his aims for the season, looking to “add that little bit extra” to a squad that last season achieved a record ever points haul for the club and lifted the Champions League trophy.

The Reds’ No.15 was absent for most of that campaign after his serious knee injury sustained at the back end of his debut campaign on Merseyside.

And while he recently admitted it could take up to two years until he no longer feels the effects of the injury, he is still keen to make an impression now.

“For me as an individual, my goals are to get back in and around the team and to help push this team forward a little bit more,” he told the official website.

“If we can do that, I can start thinking about what I need to add to my game. For now, the next step is to help the team.”

Predictably, Oxlade-Chamberlain was earmarked as ‘like a new signing’ in pre-season, along with Adam Lallana and Rhian Brewster, by Jurgen Klopp and the player agrees with that.

“I guess I am like a new person in the group he [Klopp] can use and I think I can definitely bring my qualities and provide something different to the other boys in my position.

“We all have our own qualities, we all bring different things, so my job is to do the things I was doing before I was injured.

“I’m another weapon in his armoury again now, although I’m not that new here!”

Despite his extended injury layoff, the Londoner says he doesn’t let it affect his game, saying: “I wouldn’t say I’m a different player. I’ll still try to dribble. I’ll still sometimes go into tackles that I should leave, but I go nibbling in anyway. I think that’s a good thing.

“I wanted to make sure that I didn’t think about the knee. I thought when I come back I’m just going to go with it and whatever happens, happens. I don’t want to waste my time worrying about what I love doing, and what I need to do, every day.

The 26-year-old was absent from Liverpool’s squad for their last match, against Leicester City at Anfield, with no official information supplied as to why from the club. 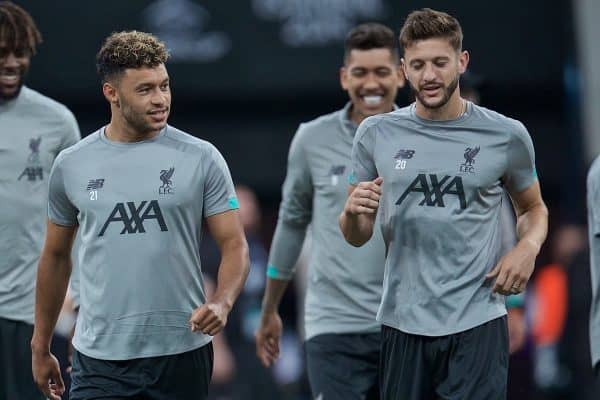 Reporter James Pearce claimed that his absence was due to being “hit in the head by a ball in training at Melwood” and that he was “left out as a precaution as he’s feeling the effects.”

However, such a claim is highly coincidental after Oxlade-Chamberlain was involved in an incident exactly of this type in the pre-match warm-up against Red Star Belgrade three days earlier.

The midfielder was with the other substitutes but hit a stray pass which hit fitness coach Andreas Kornmayer, who was overseeing the starting XI’s warm-up, on the back of the head. The German coach was on the floor clutching his head, while Oxlade-Chamberlain was on the floor laughing. Words were then exchanged between the pair.

With no international involvement for Oxlade-Chamberlain this fortnight, he will be looking to get more minutes once the Reds return, and with six games in 16 days – across three different competitions – that should certainly be the case.