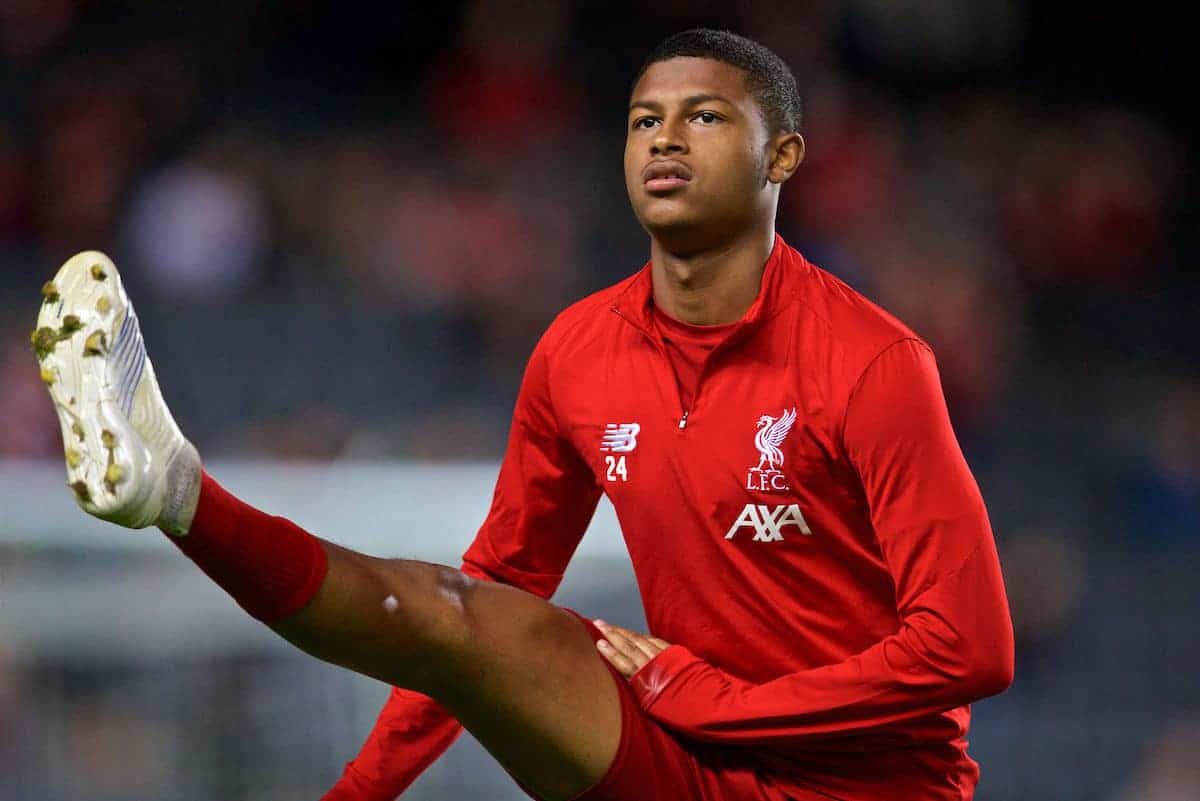 Rhian Brewster‘s slow start to what was projected to be a big season for Liverpool should be seen as part of the striker’s long-term development.

“He has goals in him, he has technique, good physicality, he’s a complete striker.”

So came Pepijn Lijnders‘ praise for Brewster ahead of his first-team debut in the League Cup at MK Dons.

That outing at Stadium MK in September was, for many, a long time coming.

Brewster was first named in a senior matchday squad in April 2017, but two years and two serious injuries later, this was his big milestone.

It was a difficult night for the 19-year-old, up against League One defenders, with fellow youngsters Curtis Jones and Harvey Elliott taking most of the plaudits, and he appeared to need further time to adjust.

But regardless, given Mohamed Salah had “no chance” of being involved against Man United on Sunday, as revealed by Jurgen Klopp ahead of kickoff, it was strange to see Brewster not even part of the squad to travel to Old Trafford.

Instead, he started for the under-23s in their home clash with Wolves in Premier League 2, with Divock Origi filling in for the Egyptian and no recognised forward named on the bench.

Neil Critchley oversaw a up-and-down 4-3 win at Kirkby, with Brewster scoring twice and assisting once, with Herbie Kane the beneficiary and Leighton Clarkson forcing an own goal on his U23s debut.

Jones caught the eye again, as did Neco Williams at right-back, but most notable was the performance of Liverpool’s No. 9.

“That was arguably his best game for us this season,” Critchley told reporters after the game.

“Not just his goals but his all-round contribution, the way he led the line particularly without the ball, competing with his back to goal as well.

“He was competing very well with longer balls and balls in the air. He put a real shift in for the team which is something he will be able to do as he gets fitter.”

Against Wolves, Brewster was deployed as a target man, often with his back to goal and tasked with challenging centre-backs Daniel Csoka, Dion Sanderson and Raphael Nya for long balls.

There were plenty of those, as Reds goalkeeper Ben Winterbottom showcased his excellent long-range passing throughout.

It was Brewster’s aerial presence which allowed Kane to secure a 2-1 lead on the cusp of half-time, bringing down Pedro Chirivella‘s lofted pass for the midfielder to fire home.

Twenty-eight minutes earlier, he had already put Liverpool 1-0 up with a fine finish in the penalty area, and he made it 3-1 after the break as he headed in Longstaff’s cross from the right.

Liverpool were fortunate to cling on for a 4-3 victory by full-time, as their issues in defence continue to undermine their efforts up front, but Brewster was a convincing Man of the Match candidate.

It was only the fourth time he has completed the full 90 minutes this season—including his outing against MK Dons—and brought his tally to five goals and two assists in eight outings at academy level.

Despite the expectation surrounding Brewster, the Reds are remaining cautious in easing him back from long-term knee and ankle problems.

Critchley alluded to this in his post-match assessment, insisting his off-ball work will only improve “as he gets fitter,” and it appears Liverpool are ensuring he works towards this in a variety of roles.

For example, while in Milton Keynes he operated off the shoulder of the Dons’ defence, pointing out his runs and darting into space, against Wolves he was an old-fashioned centre-forward, pairing his technical nous with a blossoming physicality.

The scenes of Brewster and Jones congratulating Clarkson on his debut ‘goal’ were a reminder that the striker is not built like a typical 19-year-old.

Clarkson may be more Joe Allen than Jordan Henderson, but Brewster has used his time out of action to bulk up and match his tall frame with an adult’s physique.

As Lijnders attested, he can be a complete striker.

One who “can come to first balls, who can score with his head, who can turn in the box, who can play one-on-one [and] can score a scruffy goal as well.”

This may be his best avenue into the first team in the long term, with the teenager having spoken regularly on how he views Roberto Firmino as a role model, as far back as 2017 when he lauded the Brazilian as a “team player.”

At academy level, development is given priority over results, and while Critchley will have relished the victory on Sunday afternoon it is clear the steps made by hopefuls such as Brewster are paramount.

Giving him the platform to hone his game as an all-round striker, capable of contending in the air and on the ground, coming short, running onto passes and shifting out wide, and finishing with his left, his right and his head, is key.

Klopp clearly has a vision for Brewster in the not-too-distant future, with the youngster detailing his conversations with the manager earlier this month.

“Chatting to him, he says ‘just be patient, your time will come, it will happen’,” Brewster said. “And I’m just waiting. I’m being patient.”

He hasn’t allowed that patience to dissolve into frustration, and these outings with the U23s—even when there are clear openings in the senior setup—will be hugely important as he waits for his opportunity.

Adding strings to his bow, as he did at Kirkby on Sunday, will only aid his chances of taking it when it arrives.