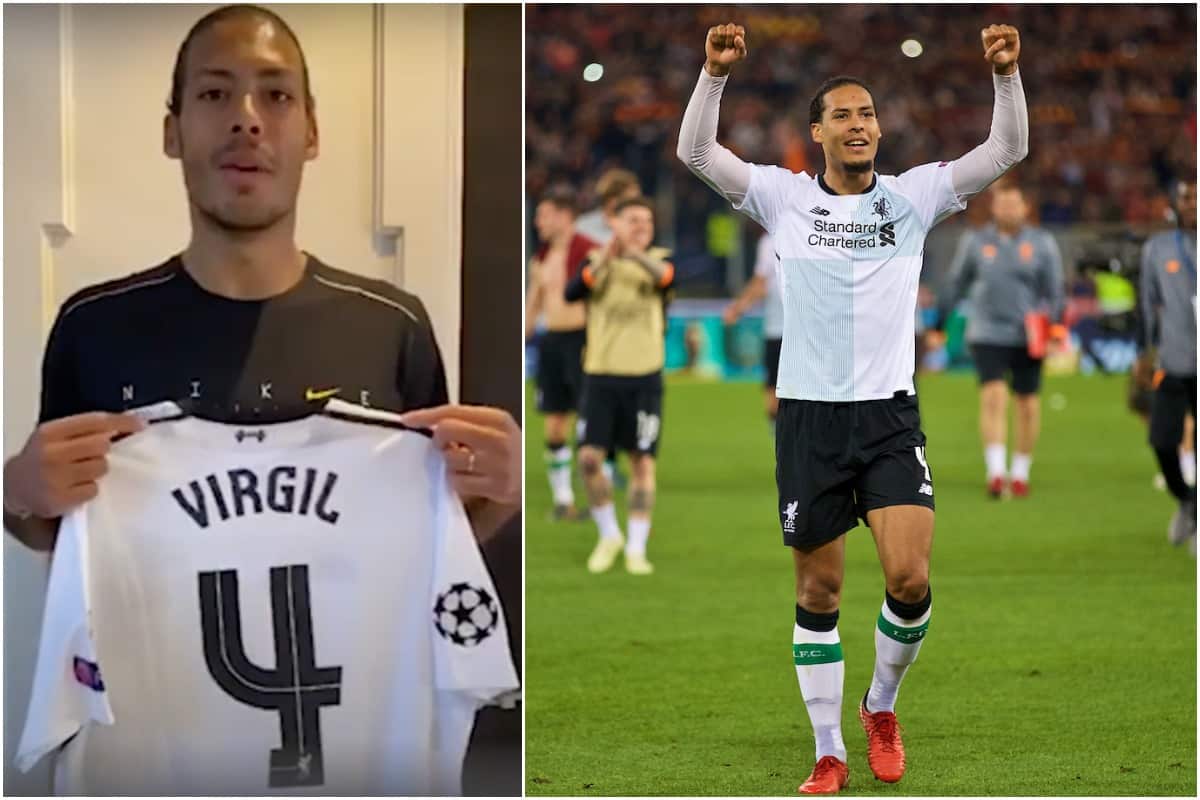 Virgil van Dijk has donated the shirt he won when Liverpool booked their place in the 2017/18 Champions League final against Roma to help raise funds during the coronavirus pandemic.

Initiatives to help those in need during the coronavirus have spanned across the globe as footballers do their bit to assist.

From collective funds and heartwarming surprises, Liverpool and the rest of the footballing world have touched many lives in the process and now Van Dijk has offered one of his match-worn shirts as part of Shirtum’s campaign.

The initiative, known as #TheBiggestGame, sees sporting icons donate a match-worn jersey to be raffled off to fans, with the player then choosing a hospital for the funds raised from his shirt to be donated to.

Fans can purchase tickets (€5) which will be represented by a digital token with the image of the jersey, where the more tokens a fan has the better chance they will have of winning their selected shirt.

@virgilvandijk In the eyes of many people, the best player of 2019! Virgil Van Dijk donates the away shirt he wore in the 2017/18 Champions League Semifinal (2nd. leg) vs AS Roma, at the Olympic Stadium. The 4-2 defeat still classified the Reds to their first UCL final in over 10 years! The money raised with Virgil's shirt also goes to Ospedale Papa Giovanni XXIII in Bergamo, Italy. . . . #TheBiggestGame #CharityShirts #DonateMoreWinMore #COVID19 #Charity #Football #vandijk #liverpoolfc #ucl #championsleague

For Liverpool’s No. 4 the jersey of choice was the away strip when Liverpool lost 4-2 against Roma in the Champions League semi-final in 2018 – it was, however, one of the most celebrated defeats as a place in the European Cup final awaited.

Van Dijk has chosen to donate all funds from his shirt to the Papa Giovanni XXIII Hospital in Bergamo, Italy, and the raffle will end on May 15.

It’s another brilliant initiative and one which Jordan Henderson has recently been reported with helping to kickstart within the Premier League, with a #shirtsforheroes campaign in the pipeline to raise further funds for the NHS and those on the front line.

* If you like to find out more about the raffle or try and land Van Dijk’s shirt, you can do so here.