Liverpool Women were officially relegated to the Championship after a majority decision saw the Women’s Super League season come to an immediate end.

After amassing just six points from the 14 games played in the 2019/20 season, the Reds found themselves languishing at the bottom of the table.

Sitting just one point behind closest rivals Birmingham City, there will have been hope that Vicky Jepson’s side could have clawed their way out of the red zone, as they still had to play Birmingham on home soil – plus a further seven games.

However, unlike the men’s top two divisions, time was called on the top two tiers of women’s football which saw final positions decided on a points-per-game ratio, with relegation and promotion maintained.

It means the Reds have been relegated for the first time since the formation of the WSL in 2011, with the two-time winners now left to fight their way back to the top.

Following the announcement on Friday, the club released a statement which spoke of their ‘disappointment’ at their fate and the inability to have rectified their position in the table with performances on the field.

But as the men’s side move tantalisingly closer to the club’s first league title in 30 years, the club now finds themselves at a crossroad when it comes to the women’s team.

And their next move will say a lot about the ‘two teams, one club’ ethos which was used far and wide last summer.

But it must act as a clean slate and a springboard to rebuild in the manner that is Liverpool Football Club as an entire entity, not simply as a men’s side.

In the 2019/20 season the Reds often struggled to see their performances reflected on the scoresheet, they were far from perfect but they certainly had a team capable of avoiding the drop.

Ultimately a lack of goals proved costly, just eight in 14 games, with the first in open play not arriving until December – their ninth league game.

To point solely at performances and results would be remiss, however, as the club must also look within to forge new, stronger foundations from which the women’s team can emerge stronger. 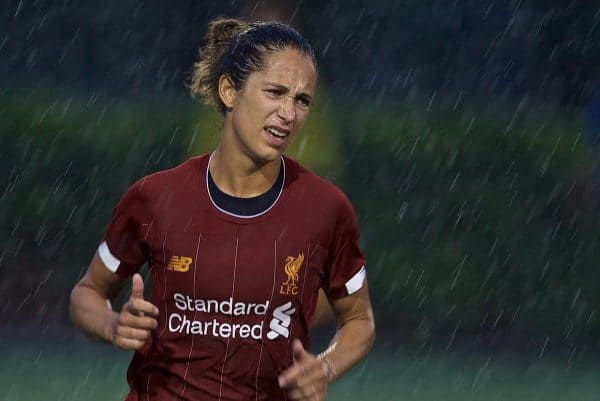 But is it is not simply their departures which have raised concerns, rather the words in which they all parted with which saw a common theme underpin each penned farewell message.

From looking forward to “the opportunity to be in an environment which challenges me” to “I can’t wait to be enjoying the game I love again” – neither expression speaks glowingly of the project at Liverpool.

But as the famous saying goes, “the only way from rock bottom is up.”

And now it is time for Liverpool Football Club to pull together as one, re-invest and re-invent themselves.

The Merseyside Derby at Anfield proved there is a fanbase within reach and a desire for the Reds to succeed and it will start by recruiting the right characters and players to tackle what is a tough Women’s Championship division, all of which will require the owners to invest in their team.

When I first signed for this fantastic club relegation was definitely not something I ever fathomed. Although it hurts right now, what is important is how we bounce back, how we collect as a club and drive forward. I have completely bought into the project of this club and our journey in returning to the WSL. Rather than dwelling on the uncontrollable, it’s time to rally together, keep our heads down and get to work. We are in this together. A huge thank you has to go out to the fans for their continued support throughout this whole process, we hear you and we will be back. YNWA • • • #ynwa #lfc #liverpool

Liverpool’s young goalkeeper, Rylee Foster penned her pain over the club’s fate on social media but notably immediately turned her attention to the road ahead.

“I have completely bought into the project of this club and our journey in returning to the WSL…We are in this together,” she said.

Now is time for action. For the club to provide the women’s team with space at Liverpool’s new £50 million state of the art training facility at Kirkby, fostering an all-important inclusivity which this club prides itself on and to truly realise the ‘two teams, one club’ ethos.

The opportunity is there, as is the talent and the fanbase, now Liverpool must act accordingly so that both the men and women’s side have equal opportunity to feel challenged, achieve success and most importantly love and enjoy what they do.