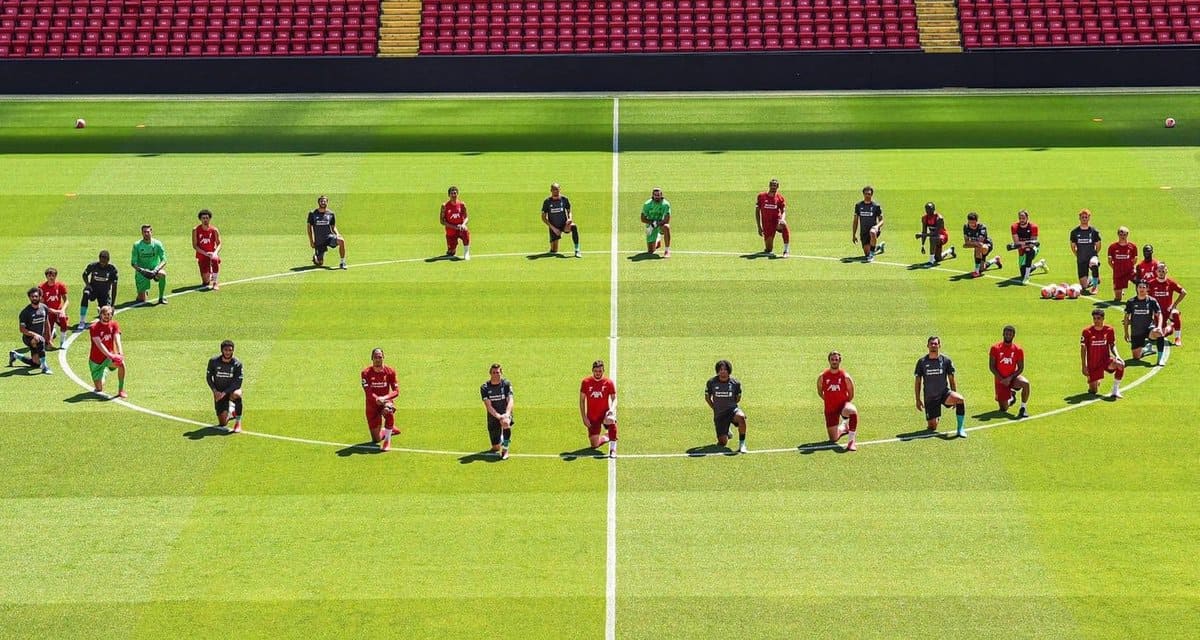 As protests continue in the wake of the death of African-American man George Floyd, the Liverpool squad issued their support by taking the knee for #BlackLivesMatter.

The shocking death of Floyd at the hands of Minneapolis police officer Derek Chauvin on May 25 has sparked a furious response across the United States and beyond.

Protests in the Minnesota city have spread worldwide, and high-profile figures have been backing the #BlackLivesMatter movement on social media, as the demand for justice continues.

Floyd was arrested on suspicion of using a counterfeit $20 bill in a deli, and Chauvin pinned him to the ground with his knee to his neck for a total of eight minutes and 46 seconds.

The 46-year-old pleaded that he couldn’t breath, before losing consciousness, and it has been ruled that the restrains he was put under contributed to his death.

Chauvin has been charged with third-degree murder and second-degree manslaughter, but this is just the start for a movement that has boiled over following years of police brutality against black people in America.

On Sunday, Liverpool striker Rhian Brewster joined those in support of the movement with a powerful message on Twitter, writing that “unfortunately for us black/brown people etc., this is a real life and everyday occurrence in so many different ways.”

“We don’t want special privilege,” he continued. “A level playing field is all we have been crying for, forever. Hear us.”

And the first-team squad have since backed the initiative by taking the knee in a photograph at Anfield, showcasing the array of nationalities within Jurgen Klopp‘s group.

Every player has shared the image on their social media accounts with the simple message: “Unity is strength.”

It is a welcome contribution from the club, as the Liverpool squad are role models for many around the world, both young and old, from every creed and religion.

In such a disturbing and uncertain period, it is essential that discrimination is rallied against, and unity is strength in this—as without it, progress cannot be made.