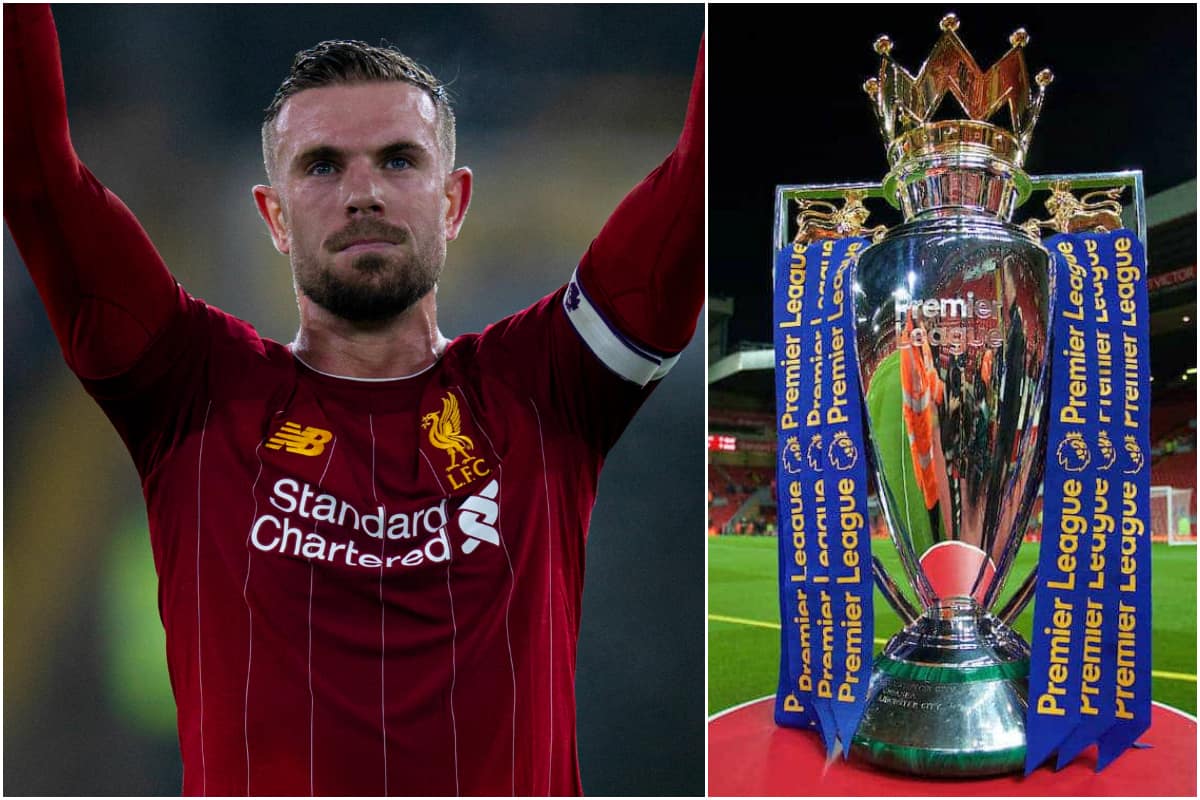 Liverpool will ensure everything is in place for Jordan Henderson to lift the Premier League trophy later this month—but he may sadly have to miss out on performing his iconic “shuffle” for the lift.

Our No. 14 has performed a brilliant, euphoria-building, fast-foot dance in lifting each of his three major trophies won as captain of Liverpool over the past year or so.

It would be expected that this one, the first league championship in 30 years, would necessitate the biggest shuffle of all—but a knee injury sustained against Brighton has probably ended that hope.

Klopp acknowledged Henderson as a “great” captain of the club and said he was delighted the job had already been made before he arrived at the club—but the No. 14 won’t be on the pitch at Chelsea, when the Reds will receive the trophy.

Even so, the boss has said Henderson will definitely lift the trophy when the Reds receive it against Chelsea.

Regarding the actual trophy lift itself, Klopp was asked about how Liverpool would ensure Henderson could have the involvement he deserves, with the skipper not able to be on the pitch for the match.

“We don’t know yet but we will do everything possible to do it the right way,” he told the media.

“Hendo will be there and wear the match kit and everything will be fine.

“He deserves exactly to be in that spot in that moment.

“If he had to have surgery and would have been in hospital it would have been difficult. But he’s not, rehab starts immediately he will fine in a few weeks and train again, play again.

“So we’ll find a solution where we show respect to what he did. All the other boys want that, want him to be there.

A couple of potential solutions have already presented themself, with one being Henderson coming on as a late sub in the match, effectively not involving himself in play but being on the pitch for the final whistle.

Alternatively, he could simply join in with the rest of the squad, with players such as Adam Lallana and Joel Matip similarly likely to be outside of the matchday 20, but having played their own roles in the season.

Either way, the hard work which counts toward the title has come across the last 34 matches (and counting), not just in that last minute of the game against Chelsea.

Hendo has been a driving force for consistency and leadership, and there can be no denying now his status as an iconic skipper in the club’s history: A European Cup and League Championship-winning captain of Liverpool FC.