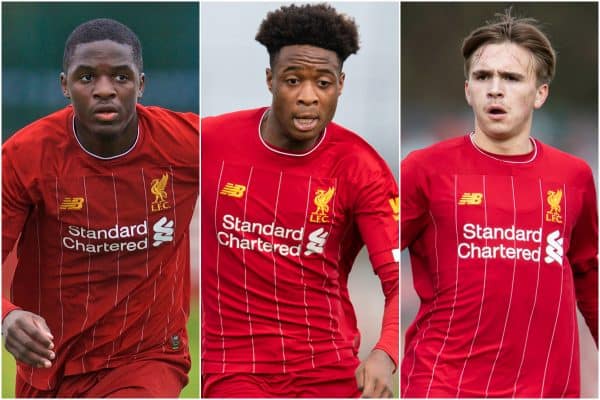 Liverpool head into a new season in 2020/21 and a restart for their academy ranks, with a new generation hoping to make their mark after an early end last time out.

The last time any Reds youth side turned out was at the beginning of March, with the enforced suspension of the 2019/20 campaign eventually leading to a premature conclusion at academy level.

Liverpool’s under-23s were deemed to have finished fourth in the league, while the under-18s came second as a points-per-game average was considered the most appropriate resolution.

A long period off has seen changes in the dugout, too, with Barry Lewtas stepping up from his role as U18s manager to fill the U23s job, while Marc Bridge-Wilkinson was promoted from the under-16s to the U18s.

Lewtas has also been appointed a new assistant in ex-Middlesbrough, Portsmouth and West Ham midfielder Gary O’Neil, with the emphasis on easing the pathway Neco Williams and Curtis Jones have made from academy to first team.

Despite its frustrating end, last season saw the likes of Williams, Leighton Clarkson and Jake Cain emerge on the senior radar, and heading into the new campaign, a new crop can set their sights on a breakthrough.

Koumetio was a surprise inclusion to the ranks as the first team headed to Austria for pre-season training, and Jurgen Klopp described the Frenchman as a “big talent” who can make “big steps” in the future.

Unsurprisingly, Klopp’s focus was on the physical development of a player who at 17 already stands at 6’3″ and is built like a senior centre-back, and the focus is on nurturing Koumetio slowly.

The next step in his development will be a regular role with the under-23s, and Lewtas will be gaining a dominant defender with a fearsome presence, along with a composure and technical quality that suits Liverpool’s possession play.

Having signed his first professional contract with the club in August, Koumetio could be one of the next to move on to full-time training with the senior squad.

Another to put pen to paper on a professional deal this summer, Bradley is likely to make a bigger impression at Kirkby in 2020/21 after an impressive maiden season with the Reds.

Signed from Dungannon United in his native Northern Ireland, the teenager is a versatile talent who has found his best form so far at right-back, having scored three and assisted two from 15 appearances last time out.

He is likely to remain with the U18s as the new campaign begins, though much could depend on moves for the likes of Ki-Jana Hoever and Tony Gallacher, as Lewtas may well call up a player who forced a way into his starting lineup towards the end of last season.

A surprise starter in the League Cup defeat to Aston Villa in February, Hill was one of the sleeper hits at the academy in 2019/20, ending the season as third-highest goalscorer at youth level with eight in 28 outings.

He is a manager’s dream, owing to his ability to play a variety of positions and, typically, do so with the vitality and urgency of a young lad from Formby, playing for Liverpool.

Best described as a box-to-box midfielder, Hill could also play on either wing, at right-back and as a No. 10, and despite his smaller frame is developing an impressive ability in the air.

Jamie Carragher named Hill as one of the youngsters the club has “high hopes for” back in June, and it is likely he gains further experience with the U23s in 2020/21.

Another of the prospects Carragher believes has been earmarked for big things in the future, Stewart was one of the standout performers across the age groups last season.

A predatory striker with the build and intelligence to thrive as a No. 9 at Liverpool, the Scouser scored 16 and assisted seven in just 23 games for the young Reds in 2019/20, with an array of finishes from the simple to the acrobatic.

Injury curtailed his momentum in the second half of the campaign, but now Stewart can step up to the plate and, likely, make his case as a leading striker at U23 level.

One of the most highly thought-of players at Kirkby, Norris is following in the footsteps of another academy product, Adam Lewis, but will be hoping for more luck than his fellow Scouser.

While injuries stalled Lewis’ progress into the first team, Norris has assumed his mantle as the creative, tenacious left-back star at youth level, while also being able to fill in when required in the midfield.

Norris has already made inroads at U23 level last season, and with Lewis and Yasser Larouci moving on, he could become a first-choice starter in Premier League 2 despite his young years.

A player who only came to the fore in the second half of the season, Morton is a tactically flexible midfielder who looks set to form the new core of Bridge-Wilkinson’s U18s squad.

Capable of operating as a deep-lying midfielder or further forward, the 17-year-old will be tasked with filling the shoes of Clarkson and Cain, who are on Klopp’s radar after contributing nine goals and 24 assists between them in 2019/20.

Having ended last season on a high, Liverpool will be looking for Morton to pick up where he left off as a creative outlet for the U18s this time around.

Within the workings of Liverpool’s academy setup, there is a belief that Balagizi could be the ‘next big thing’, according to The Athletic‘s Simon Hughes.

Signed from Man City in 2015, the physically imposing youngster made a splash at U18 level last season, but there was a clear hesitance to throw him in too early, limiting Balagizi to just 11 appearances.

That is likely to increase in 2020/21, though quite where he will slot in remains to be seen, having showcased his ability up front, out wide, as a No. 10 and even as a No. 6 last time out.

He could be a real project for Bridge-Wilkinson, with elite development coach Vitor Matos no doubt keeping a close eye on Balagizi’s development.

Liverpool welcome Polish forward Musialowski to the club this summer, having finalised his switch from SMS Lodz earlier in the year, after scoring a reported 130 goals in 80 games for the club.

Musialowski is capable of playing across the forward line but is most comfortable as a No. 10, and it is anticipated he will begin life as part of Bridge-Wilkinson’s U18s side, provided he receives international clearance.

Back in 2016, Zbigniew Boniek, a legendary ex-Poland international and current president of the Polish FA, tipped the youngster for big things, tweeting: “Mateusz Musialowski – remember this name.”

Another young Pole brought into Liverpool in recent years, Ojrzynski should continue his progress as first-choice goalkeeper for the U18s, while also potentially challenging Vitezslav Jaros at U23 level.

Injury problems restricted him to 14 appearances in his first season with the Reds last time out, but when he was able to play he impressed.

Having already trained on a number of occasions with the first team, another season of progress could be see Ojrzynski thrust into the picture at senior level, as a number of young ‘keepers vie for a role supporting Alisson.

Perhaps the least well-known youngster on this list, Woltman is a Wirral-born striker who made his debut at U18 level last season, ending the campaign with an impressive four goals and one assist from seven games.

Depending on the progress of Stewart, and plans for the likes of Paul Glatzel and Fidel O’Rourke, he could well enjoy considerably more game time under Bridge-Wilkinson in 2019/20.

It was a bright start for Woltman when given his chance, and the hope is he can kick on and keep scoring this season.