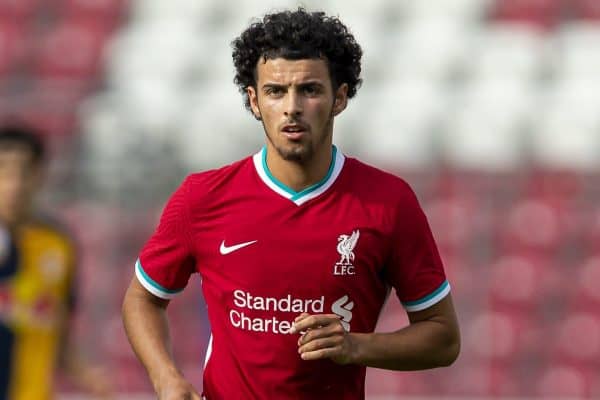 Two Liverpool starlets have been named in the England U21 squad for next week, with Curtis Jones being handed his first call-up after tremendous recent progress.

The attacking midfielder is a regular in the match-day squad under Jurgen Klopp, one of the Reds’ options off the bench in league games and a certain starter for the cups.

His eye for goal, technical ability on the ball and tactical versatility all make him one of the most exciting young players around and, in truth, it’s strange that he hasn’t been given the call beforehand with England.

To put into perspective how overdue the call-up is, Jones has played over 200 minutes this season already for the best side in the top flight; two of his new midfield team-mates are only in the Championship, while Everton‘s Tom Davies has managed two minutes on the pitch in the league and a couple of cup outings, around half Jones’ game time.

But he is now in, called up by Aidy Boothroyd for the U21’s fixtures against Andorra (7 October) and Turkey (13 October) for European U21 Championships qualifiers.

Along with Jones, Rhian Brewster is also in the squad.

The striker has already made six appearances for the national team at this level, though is usually a sub option and has not yet found the back of the net.

During the last international break, Brewster made two appearances totalling 26 minutes, as he continues the slow build-up of his footballing education—though this could move much quicker soon, with a move to Sheffield United seemingly imminent.

For his part, Jones is making the step-up having already represented England at every age group from U16 through to U19, with his last international outing coming in December 2019.

The news follows three Reds being named in the senior England squad, including skipper Jordan Henderson who has missed Liverpool games through injury recently.

Meanwhile, Rhys Williams has been named in the England U20 squad, while Harvey Elliott is with the U19s.

England U21 squad for October