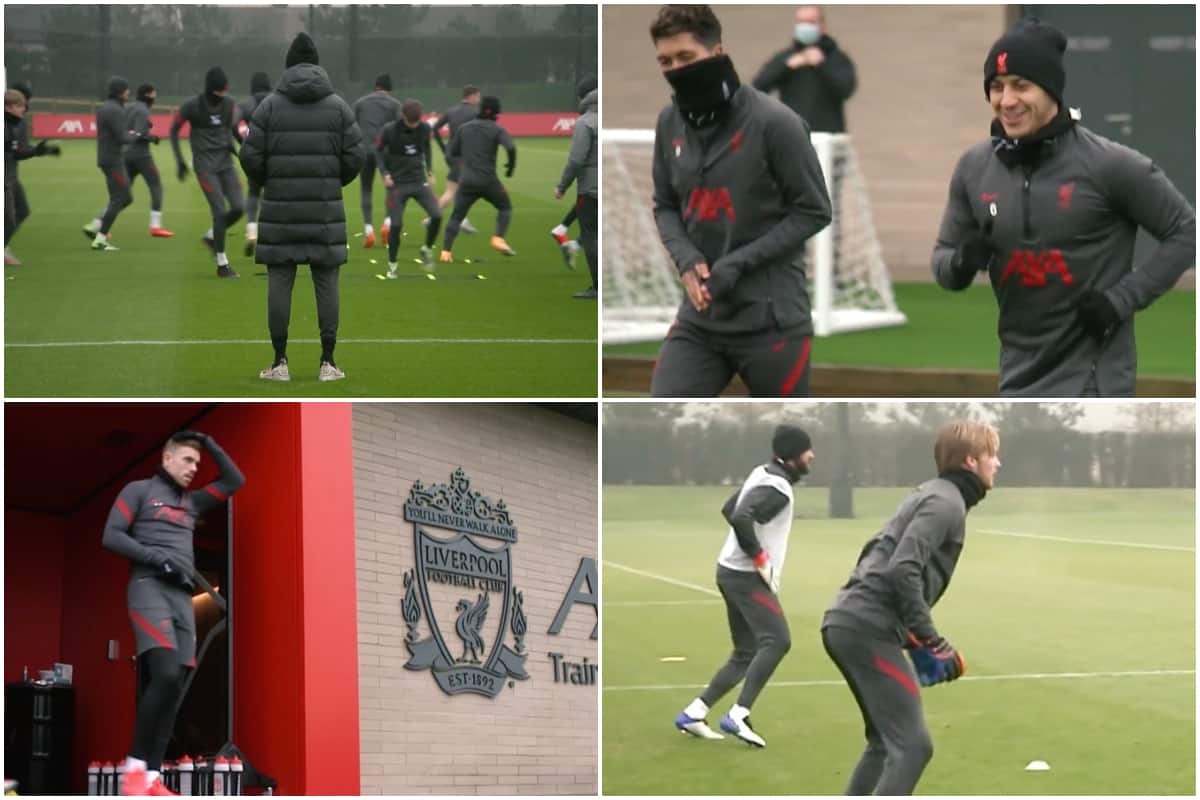 Naby Keita and Joel Matip were still absent from the Liverpool squad in training at Kirkby on Wednesday, with the chances of either featuring against Man United slim.

The Reds have been afforded the luxury – or perhaps, as their previous record would suggest, the challenge – of seven days between their last outing and the visit of United.

Eight days after the 4-1 win at Aston Villa in the FA Cup, and with a full week to prepare, Jurgen Klopp‘s side face one of their biggest games of the season so far, at home to the Premier League leaders.

United leapfrogged Liverpool to top spot and finally drew level in terms of games played with a 1-0 win over Burnley on Tuesday night, which sets up Sunday’s clash as a must-win for either side.

Both clubs are hampered with injury issues, but the Reds are affected most severely given their long-standing problems at centre-back without Matip, Joe Gomez and Virgil van Dijk.

That appears unlikely to be eased in time for the weekend, with Matip not part of the squad pictured in training at Kirkby on Wednesday.

Neither was Keita, who has missed the last four games, as the Guinean’s niggling injuries continue this season – having also missed a period due to COVID-19 earlier in the campaign.

The involvement of Matip or Keita against United would be contingent on the pair returning for at least two of the next three sessions on Thursday, Friday and Saturday, but they should be considered major doubts at this stage.

Klopp was able to call upon an otherwise strong squad at Kirkby, albeit with long-term absentees Van Dijk, Gomez, Diogo Jota and Kostas Tsimikas still unavailable.

There has been no repercussion of the back problem Sadio Mane looked to have suffered early into last Friday’s victory at Villa, while all four of the manager’s emergency centre-backs were all in training.

Fabinho is guaranteed to start against United, with Klopp facing a decision over which of Jordan Henderson, Rhys Williams or Nat Phillips to partner the Brazilian.

His selection is eased by the continued fitness of Thiago, who is likely to join Gini Wijnaldum in the middle of the park alongside one of Curtis Jones, Alex Oxlade-Chamberlain, Xherdan Shaqiri or James Milner.

In the absence of Jota, Mane is expected to start alongside Mohamed Salah and Roberto Firmino as ever, though Shaqiri is another candidate if the manager wishes to switch his setup.

With speculation over the continuation of the academy campaign amid a rise in COVID-19 cases, Leighton Clarkson and Jake Cain remain part of the first-team squad at Kirkby.

So, too, were goalkeepers Marcelo Pitaluga and Jakub Ojrzynski on Wednesday, with Adrian missing as the young stoppers joined Alisson and Caoimhin Kelleher for a series of drills overseen by John Achterberg and Jack Robinson.

Adrian‘s absence is yet to be explained, though with six months left on his contract and now having lost his place to Kelleher, a January exit cannot be ruled out.