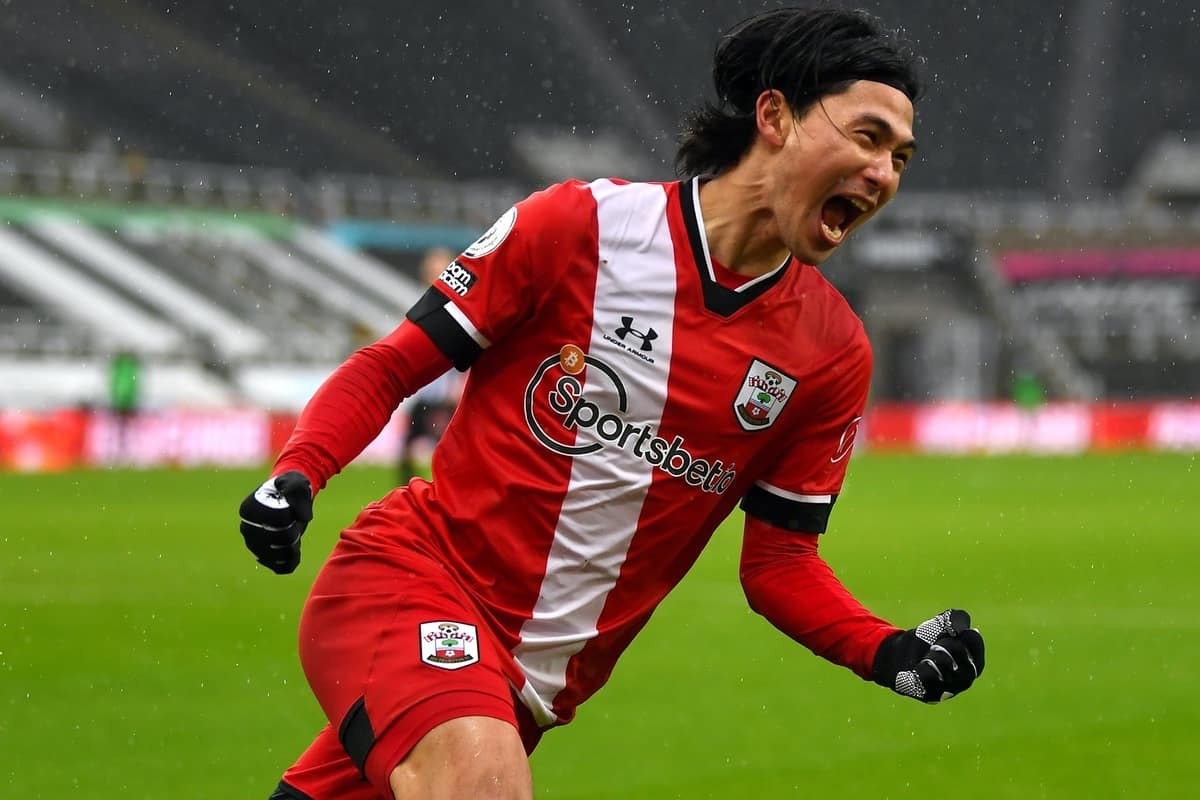 Takumi Minamino has headed to Southampton as part of a “long-term project” to prepare him for a role at Liverpool, but will the move actually benefit his parent club?

Upon Minamino’s surprise deadline-day loan to St Mary’s, many were convinced it was a signal of the end his time with the Reds, but Jurgen Klopp‘s explanation of the deal diffused that.

“Takumi is a long-term project, always was,” the manager said.

“We see a lot of potential in Takumi and it makes absolute sense for him to play maybe 17 games in the Premier League.

“And then he comes back in a different mindset, confidence level, all these kind of things. So I hope it is a win-win situation.

“He just has to enjoy football again there. He’s an outstanding professional, a top talent and a really, really good player, so it’s all good.”

That the Japan international started the first possible game, and scored within 30 minutes, is a strong sign that, as Klopp continued, “Southampton makes sense,” and the prospect of a “win-win situation” is intriguing.

If Klopp is to be believed, and the plan is for Minamino to return to Liverpool in the summer, it is a move that suits the player on a number of levels. 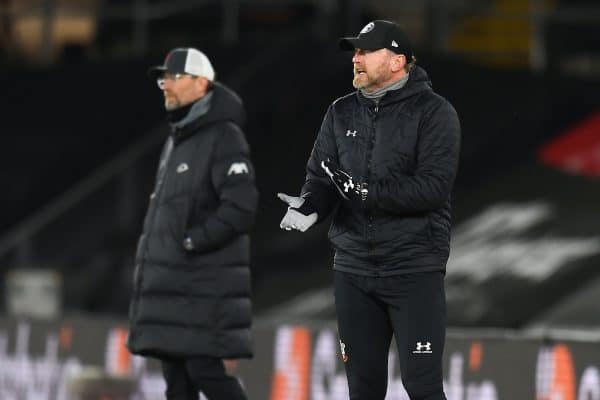 The last-minute move for Minamino – announced in the early hours, after the deadline had passed – stemmed from Southampton‘s enquiry over Neco Williams, but he was a player tracked by Ralph Hasenhuttl for the long term.

Both products of the Red Bull machine – Minamino of Salzburg, Hasenhuttl of Leipzig – it was hoped the pair could unite on the south coast prior to the forward’s switch to Liverpool.

In the wake of the loan deal, Hasenhuttl said he was “really disappointed” to see Liverpool secure the player’s signing at the start of 2020, but now they will work together on a short-term basis.

It is no surprise both clubs were interested in Minamino, as under Klopp and Hasenhuttl – the latter of whom was even referred to as the Alpine Klopp, owing to his Austrian heritage – Liverpool and Southampton play a similar brand of football.

“The gut reaction was they just took whatever they could, desperate for something – anything. It felt a bit like that meme of someone stopping a water leak with some flex tape,” Tighe told This Is Anfield.

“But if we analyse the transfer in a vacuum, it makes some sense.

“The Salzburg version of Taki I remember will suit Hasenhuttl’s style really well, and the way Jesse Marsch talked about him on Ranks FC last year, there’s a clear belief in some quarters that he can be Firmino-y or Ings-ish from a forward role.” 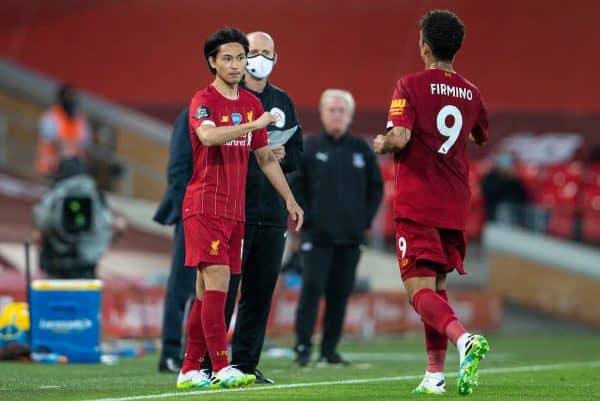 For Liverpool fans, the names Roberto Firmino and Danny Ings evoke a similar brand of football: high-intensity, high-pressing and high-value in the final third.

In terms of pressing success, Southampton (32.5%) are second only to Liverpool (32.6%) in the Premier League, with both sides also ranking high across the top flight when it comes to the sheer volume of presses attempted.

Transitioning from one suffocating system to another is part of the reason why Klopp sees Southampton as a stop-off that “makes sense,” and Hasenhuttl agrees, saying on Minamino’s arrival that “he knows when you come to me you have to run a lot, but that’s not a problem.”

It is clearly not as straightforward as “running a lot,” though, and fortunately his debut goal against Newcastle suggests Minamino has found the ideal role to suit his strengths.

Hasenhuttl’s Saints almost exclusively line up in a 4-2-2-2 formation – used in the majority of games this season – with tweaks when the occasion requires it, such as the deeper-sitting 4-4-2 that took a 1-0 win from Liverpool in January.

On his debut, Minamino took his place on the left of the advanced two, joining Nathan Redmond in providing support for the regular strike partnership of Ings and Che Adams, which rid him of the responsibilities that have dogged him at Liverpool.

There is no letup in terms of work ethic between Klopp and Hasenhuttl’s approach, but in this role at Southampton, Minamino is able to drift more, operating between the lines as, acknowledged by the Reds manager in September, is where he plays best.

“Wherever he will play in the end, he will end up in the centre,” Klopp said after his No. 18 scored two and assisted one in the 7-2 League Cup win over Lincoln.

“If he plays on the left wing or the right wing, he will play in the half-spaces or the centre, because that’s where he has his real strength.”

Though clearly a small sample size, Minamino’s touch map in the Saints’ 3-2 loss to Newcastle highlights his fluidity and tendency to operate as a magnet to the ball: 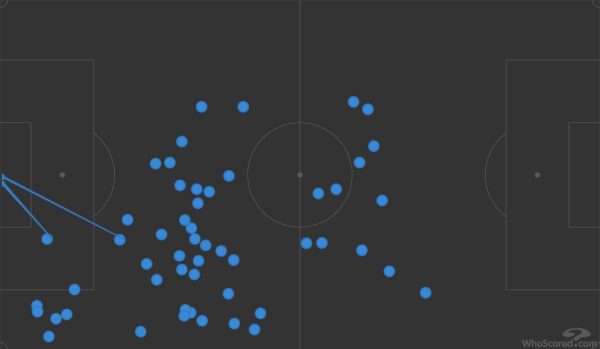 However, with Minamino’s versatility and how the vagaries of the current campaign are affecting Southampton in terms of injuries, Tighe foresees a stint further forward too.

“Playing in a genuine front two will probably make things a little bit easier for him,” he continued, with Minamino often struggling to provide the all-round influence required standing in for Firmino as Liverpool’s sole striker.

“And if Ralph feels a fresh face in attack can spark something, fair enough.”

The need for a “spark” at St Mary’s is clear, with Southampton now on a run of four consecutive defeats and having won just three of their last 12 games in all competitions, and after an impactful start, all signs point to Minamino taking up a focal role.

In a unique season in which, due to the absence of three senior centre-backs, Klopp has recently preferred Divock Origi almost solely due to his height, the switch to Southampton should be seen as a “win-win situation” for Minamino.

It is a temporary solution for player, parent club and loan club, with Minamino picking up the game time required to finally settle into life in English football and both Liverpool and Southampton benefiting from him doing so.

For Southampton, the return is immediate – particularly if he follows up his first goal with at least a handful more – while for Liverpool, the end product should come in welcoming back a more confident, more clinical Taki.

While a popular figure, it would be difficult to argue that Minamino’s first year in the Premier League has been anything other than disappointing.

That is understandably so, given he spent his first months on Merseyside training on Zoom. 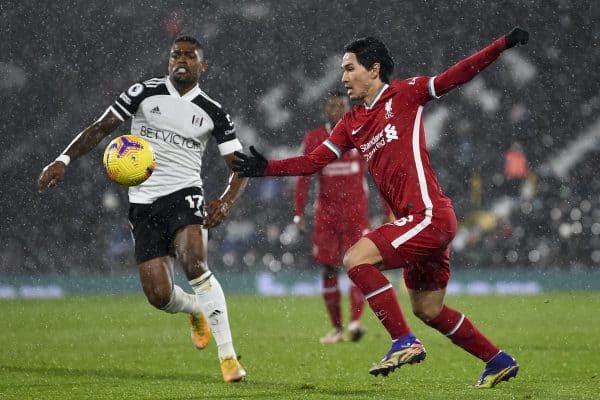 He has looked weak, at odds with his positional demands and unable to assert himself in big-game occasions, but Klopp is hoping time at St Mary’s, under a manager with a similar philosophy, will inspire his £7.25 million signing.

With the Reds in a state of flux as their title defence falls apart, a restored Minamino – the player who rocked Anfield while in Salzburg colours – could take up an important role in a new-look Liverpool squad.

For that to transpire, a number of variables need to fall into place, but a stint at Southampton gives Taki every chance of doing so.