Gareth Southgate has praised the flexibility of his four right-back options in the provisional England squad, hinting Trent Alexander-Arnold could play in midfield.

In the buildup to Southgate’s squad announcement on Tuesday, the majority of the speculation was over whether Alexander-Arnold would regain his place.

With the England manager naming a 33-man provisional group due to a number of close calls with fitness and Man United, Chelsea and Man City all still to compete in European finals, the 22-year-old made the cut.

It is still unclear whether he will be part of the squad at this summer’s Euros, as he is considered to be competing with Kyle Walker, Kieran Trippier and Reece James for two or three spots.

But in his unveiling press conference, Southgate dismissed the notion that they were “four right-backs,” instead insisting they are “four good footballers,” pointing to Alexander-Arnold’s ability to play in midfield.

“What I would say is you are looking at four right-backs – and I know people feel I have an obsession with right-backs – but I just see four good footballers,” he explained.

“We’re going to a tournament, and those sorts of flexible players, that can fulfil different roles but are good footballers, are going to be hugely important to us.” 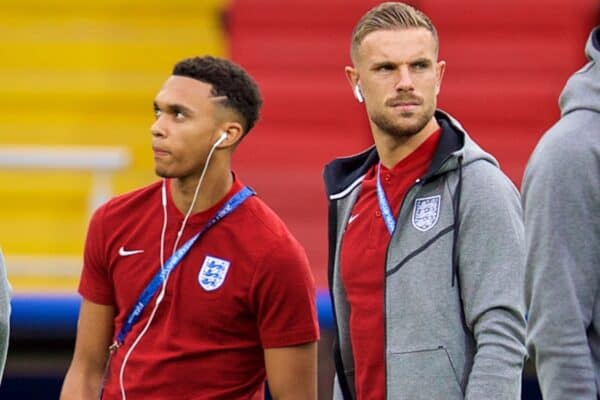 It has long been mooted that Alexander-Arnold’s future could be in midfield – where he last played regularly as part of Pepijn Lijnders’ under-16s side – though that is unlikely to be the case with Liverpool at least.

Jordan Henderson was also named in the squad and would effectively serve as competition for his team-mate if he was to move into the middle.

Southgate was asked about the fitness of the Liverpool captain, saying he was “firmly on track” and even arguing that he “may be ahead of others” having spent a long period working on his fitness.

“We actually think Jordan, the level of work he’s been able to achieve is very high,” he said.

“What we haven’t been able to see yet is him on the pitch, in the match situation.

“He’s firmly on track to be involved in those games and to be able to play in those games, and there would be no point in bringing him if that wasn’t a possibility.

“So in some regard, he may be ahead of others. He’s had a long period out, but he’s had a high training load without the matches.

“Jack Grealish has had a long period out, has played the matches, maybe hasn’t had the intensity of the training.

“We’ve got to see how they respond to training with the group, what their recovery is like, what other issues that could throw up.

“Although they’re heading in a good direction, these are not an ideal situation.

“We’ve got four of those, with Kalvin [Phillips] and Harry Maguire as well. We’re just going to have to monitor all those really closely.”

Ahead of the Euros, England will play Austria (June 2) and Romania (June 6) in warmup friendlies, before kicking off the tournament at home to Croatia on June 13.