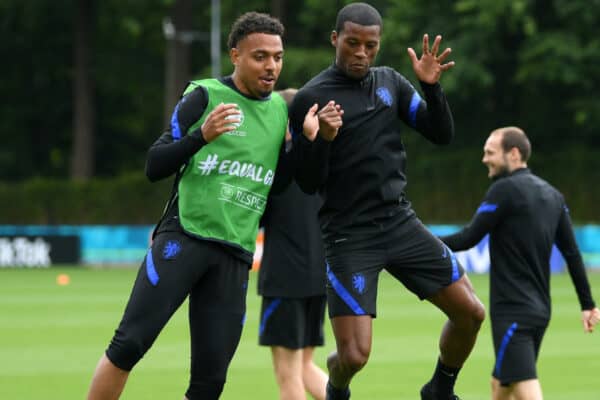 Two reliable sources in the Netherlands have claimed both Liverpool and Dortmund are in talks with the agent of PSV striker Donyell Malen, who will leave this summer.

PSV manager Roger Schmidt has openly admitted that both Malen and right-back Denzel Dumfries are expected to depart in the transfer window, saying “that’s how it goes in football.”

Liverpool have been touted as suitors for the 22-year-old ex-Arsenal forward since April, when Dutch publication Voetbal International suggested they were front-runners for his signature.

Timmer explains that Malen and Dumfries “are allowed to talk to other clubs,” and despite there being “nobody concrete yet” he adds that “there are negotiations going on.”

Rik Elfrink of Eindhovens Dagblad has corroborated that Liverpool are “serious in the market” for Malen, with he and Timmer considered reliable sources when it comes to PSV.

“We have to wait for one of the clubs to go ahead with an offer to PSV,” Elfrink explains, with talks seemingly only going through the player’s agent at this stage.

That is typically the case with modern transfers, with clubs conducting due diligence before approaching a potential seller in order to ascertain whether a player would be open to a move in the first place.

It would appear that both Malen and PSV are looking for a deal this summer, and the striker would certainly fit in at Liverpool.

The Reds are looking to move on Divock Origi, Xherdan Shaqiri and Takumi Minamino in the transfer window, and despite the return of Harvey Elliott from Blackburn, will be eager for another addition in attack.

Malen, who scored 27 goals and assisted another 10 in 45 games for PSV last season, would arrive as competition for Roberto Firmino up front, as well as a possible option on the flanks.

It is unlikely that he is the only target Liverpool are considering, of course, with Ollie Watkins, Ismaila Sarr, Pedro Neto and Harvey Barnes linked in recent weeks.