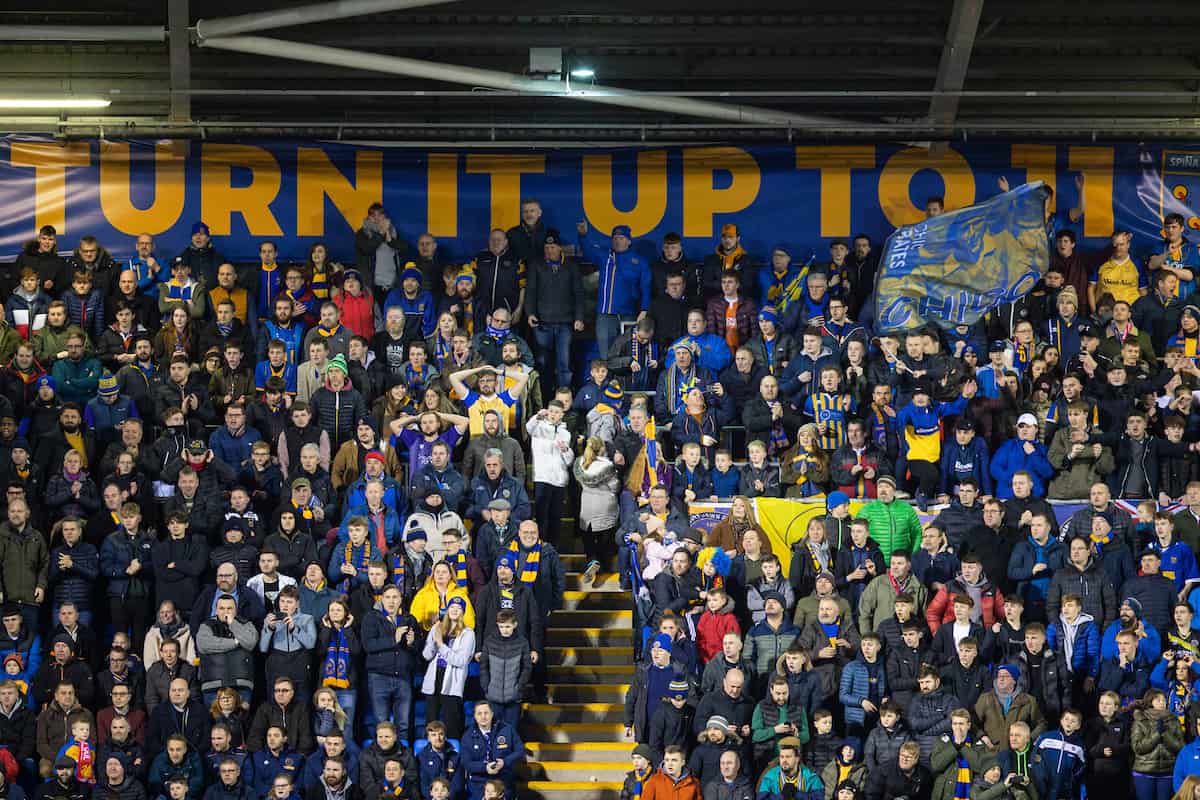 Liverpool fans have shown their appreciation for Shrewsbury calling out a section of their ‘supporters’ for their “vile and offensive” chants that mocked the Hillsborough disaster.

On Sunday afternoon, a video of a group of Shrewsbury ‘fans’ showing them singing about the 96 (now 97 victims who were unlawfully killed) emerged on social media.

Sadly predictable, it is the latest in a long line of football ‘fans’ that have mocked 97 supporters who were killed unlawfully in the tragedy in 1989.

Usually, it gets swept under the rug and doesn’t get a second glance from club’s or their players, but Shrewsbury went against the grain with their swift stance.

First, Shrewsbury goalkeeper Harry Burgoyne called out the supporters and voiced the need to “out them and ban them for life“, and now the club themselves have released a statement:

“Shrewsbury Town Football Club is disgusted and appalled to see and hear the reports on social media about the vile and offensive chanting and behaviour of a very small minority of our ‘supporters’ yesterday.

“These people do not represent our Club in any way shape or form and we are liaising with West Mercia Police to try and identify those responsible who will in turn liaise with Merseyside Police.

“If any supporters have any information that might assist us in identifying those responsible, they can contact the Club confidentially and we will use the information as part of our investigations with the Police authorities.”

The response was welcomed by Liverpool fans as far too often clubs appear content to just let chants mocking poverty, starving children and the Hillsborough disaster pass them by.

That cannot be the case and Reds appreciated the Shrews’ response:

Hillsborough chants won't stop until more clubs, and mainstream media outlets, call them out and make a fuss about it. Excellent of Shrewsbury to do that. They succeeded where @LCFC failed, fair play. https://t.co/JWTSbuRihc

Got a lot of respect for these lot and their players https://t.co/HfoOGM2fuU

Fair play, most clubs just ignore this when it happens, so good on Shrewsbury for tackling it head-on! https://t.co/XdMyvn9EDA

???? huge respect to them for speaking out about this. it’s sad that behavior like this still happens. https://t.co/FtrirtBk1s

Glad to see a club taking a stance and calling their so called fans out on this. It’s disgusting, well done @shrewsweb I hope these individuals will be identified #JFT97 #HillsboroughLawNow https://t.co/Hr2264c5IB

These have done more in less than 24 hours than ANY other premier league club have done when their ‘fans’ have been a disgrace. https://t.co/H3UhrcO98H

Respect is the word for all those who have called fans out for their vile behaviours, more need to follow in their footsteps.