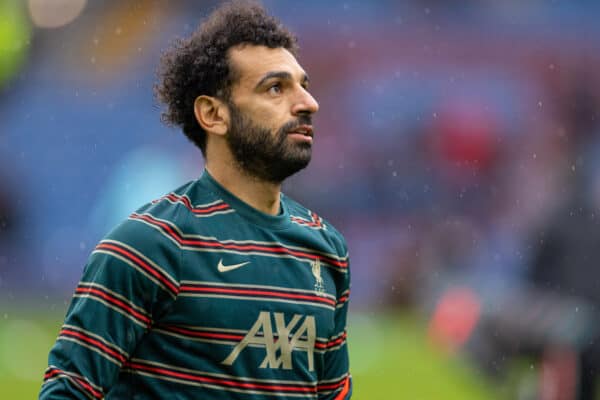 Mo Salah‘s contract remains a growing talking point the longer no conclusion is reached, with the No. 11 saying it’s in the “club’s hands” while Jurgen Klopp says “the club did what it can do.”

Salah has 16 months left on his current deal and the noise from the player and Klopp has long been to reach an agreement that keeps the Egyptian at Anfield for the long term.

Yet, no conclusion has been reached between the respective parties and Salah has insisted he is not looking for “crazy stuff” from the club and that it is in Liverpool’s hands.

But again asked about the situation ahead of the Reds’ trip to Brighton, Klopp offered words that can be construed as worrying, hinting at an offer that is now firmly in Salah’s hands.

“I think Mo definitely expects this club to be ambitious, and we were in the last few years and we are,” Klopp said of the situation.

“No, of course, we cannot do much more that’s how it is but I don’t think it’s about that.

The manager finished off on a less alarming note but it does suggest an impasse and a final offer from the club that Salah can take or pass on.

With both parties suggesting it is in the hands of the other, there could yet be an extended wait to see how the cards fall – but if any player is worth investing in, it is Salah.

What has Salah said?

In an interview with GQ – conducted in November – the 29-year-old touched on the situation in what was an interesting discussion that also extended to only getting better with age.

“I want to stay, but it’s not in my hands. It’s in their hands,” he said. “They know what I want. I’m not asking for crazy stuff.

“The thing is when you ask for something and they show you they can give you something, [they should]. Because they appreciate what you did for the club.

“I’ve been here for my fifth year now. I know the club very well. I love the fans. The fans love me.

“But with the administration, they have [been] told the situation. It’s in their hands.”