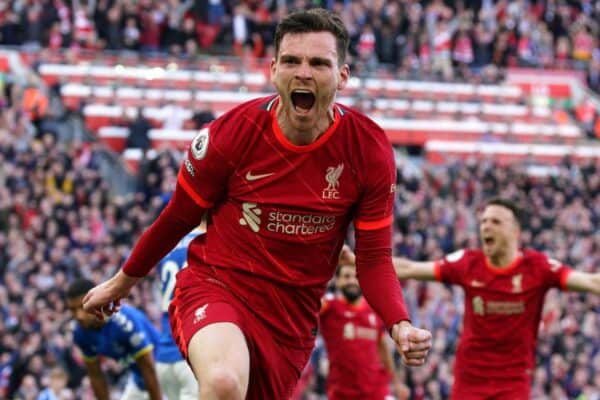 Liverpool 2-0 Everton: Player Ratings – What the media and statistics say

Goalscoring hero Andy Robertson stood out in Liverpool’s hard-earned 2-0 win over Everton, with others not quite at their best.

It was a huge Merseyside derby, with the Reds and the Blues desperate for points for very different reasons.

Liverpool struggled to get their usual game going as Everton defended resolutely and mastered the dark arts, but they got the breakthrough with a rare Robertson header.

It was Robertson (8.3) who was the richly-deserved recipient of the highest average rating by far, on a day when he was an unlikely hero.

The Scot opened the scoring with a well-taken header after a nerve-racking opening hour or so, celebrating wildly in front of the Kop.

Ian Doyle of the Echo felt Robertson was “regularly an outlet down the left” for Liverpool, standing tall while others struggled.

Next in the reckoning were Joel Matip (7.3) and Thiago (7.3), both of whom enjoyed solid afternoons.

Matip produced an 89 percent pass completion rate, according to FotMob, who also highlighted that he won four out of his six tackles.

Doyle claimed that Thiago was “more effective” in the second half, adding that he took advantage of Everton‘s “concentration levels” dipping.

Next up was Virgil van Dijk (7.1), after the Dutchman cruised through proceedings in typically unruffled fashion.

Naby Keita (6.2) and Sadio Mane (6.2) received the lowest scores, with the former accused of “not offering any thrust” by Jackson.