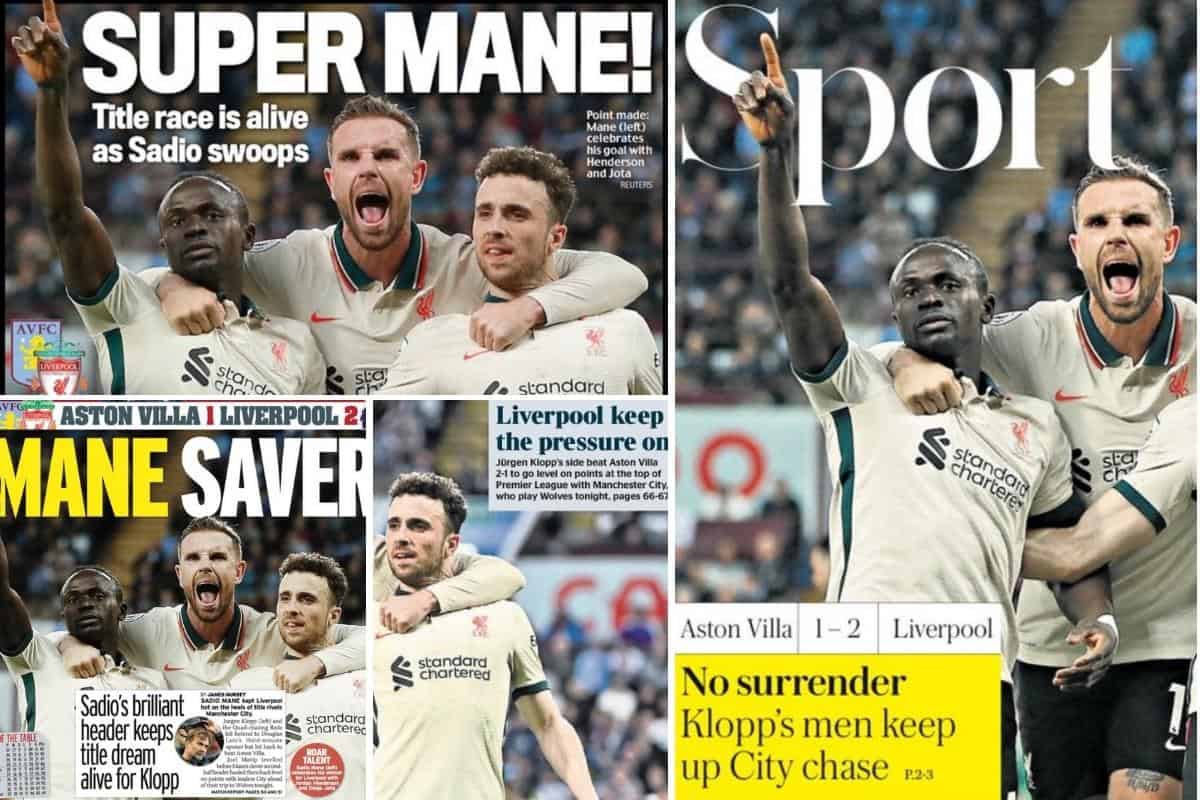 Liverpool had to dig deep yet again in their 2-1 win away to Aston Villa, with the watching media hailing Sadio Mane and the Reds’ resolve.

Jurgen Klopp‘s side were never at their fluent best on Tuesday evening, but as has become the norm this season, they got the job done.

Joel Matip and Mane scored in either half for Liverpool, as they responded like potential Premier League champions after Douglas Luiz’s early opener.

Here’s a look at how the media reacted to the Red’s latest victory.

Liverpool had to work hard to earn all three points… 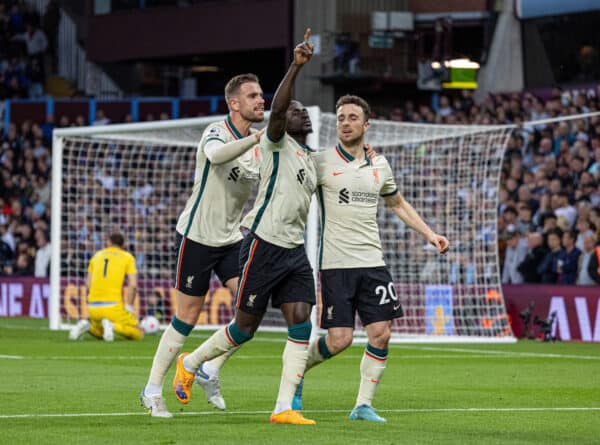 Henry Winter of the Times lauded the hard-earned nature of the win:

“Liverpool absolutely refuse to give up the chase.

“They fell behind here, were constantly tested by Steven Gerrard’s fired-up Aston Villa, but fought back to go level with Manchester City at the top of the Premier League.

“City remain favourites, even more so if they prevail at Molineux tonight, but Liverpool are determined to keep the pressure on.”

The Independent‘s Richard Jolly compared the win at Villa Park to that of 2019/20:

“A slip from Steven Gerrard may have cost Liverpool a Premier League title. A team of his will not do likewise this year, valiantly as Aston Villa tried. For an hour, Manchester City seemed to be closing in on the crown. Liverpool looked like dropping points for the second successive game.

“But there was no slip-up after May’s great catalyst intervened. Liverpool have trailed in all three matches in the month, but their powers of recovery have been aided by Luis Diaz.

“The January signing was the architect of Sadio Mane’s eighth goal in his last 10 starts. The Senegalese got a crucial winner at Villa Park in a title-winning campaign in 2019: this, earlier in the game but far later in the season, has the potential to be as crucial.”

Mane came in for special praise… 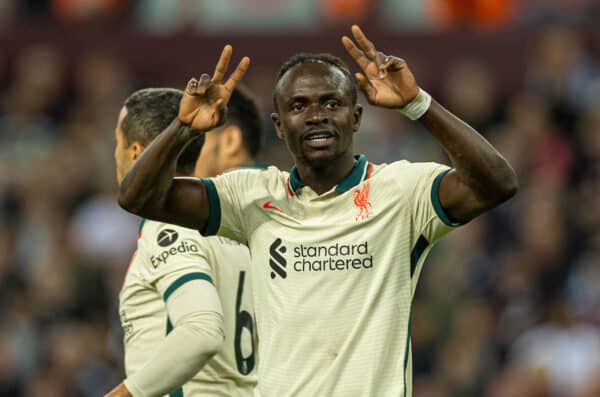 “With Salah’s form patchy, Mane has emerged as Klopp’s go-to forward in recent weeks, and his performances during the second-half of the campaign must surely be factored into any talks over his future, which as it stands are scheduled for the end of the campaign.

“Liverpool have recruited well with the likes of Diaz and Jota, but they would have to pull off something special to find themselves another Mane.

“Yet again, it was the man from Senegal who stepped up when needed. On a night Liverpool had to win, Mane ensured they did.”

“It was the sheer nonchalance of it. The casual ease with which Sadio Mane guaranteed another lap of the title race. He won this match as if it were a training ground exercise, not a potential championship decider.

“He scored his header as if it was the last play of a Friday five-a-side, not a goal that keeps Liverpool in the hunt for an unprecedented quadruple.

“Liverpool needed a goal, and they got a goal. Yet it was the insouciant manner of Mane’s finish that caught the eye. It was a cool, first-time take, converted as if of small consequence.

“The last in a convincing cup win over lower league opposition perhaps; a goal in the 85th minute of a Champions League group stage dead rubber. Only when Mane fell to his knees and kissed the turf in thanks, did the true significance of his intervention show.”

And Nathan Ridley of the Mirror showed his appreciation for Mane, too:

“Who else but Sadio Mane to vindicate his manager? Liverpool’s top goalscorer in their purple patch since February, the Senegal skipper emphatically headed home a cute cross from Luis Diaz from the left wing, leaving Martinez with no chance.

“Wheeling away in front of the Kopites who’d made the trip to the Midlands, Mane affirmed his status as Klopp’s current talisman.”

The Premier League title race still has a heartbeat…

This Is Anfield‘s James Nalton refused to give up on the title:

“Liverpool are now level on points with Man City at the top of the table, but it feels a lot less optimistic than the similar situation after the Spurs game due to City’s newfound superior goal difference.

“City duly went on to win against Newcastle, scoring five without reply which effectively gives them an extra point in the title race at this stage.

“The Reds now need City to lose a game and there needs to be some recovery of goal difference. For now, all they can do is keep winning.

“Regardless of what happens in the title race, Liverpool winning all of their games between now and the end of the season would certainly be some result.

“92 points would be the club’s third-highest ever points total and enough to win the league in 24 of the previous 29 seasons.”

The Guardian‘s David Hytner is another who thinks there could still be another twist:

“Never mind the nonsense about who the majority of England want to win the Premier League title. Or the standout plotline of Steven Gerrard hurting the club that he loves with Aston Villa. Liverpool knew what they needed to do in order to keep their hopes alive and they knew that it would be difficult.

“So it proved. Villa scored first through Douglas Luiz, they were excellent for the opening half-hour and they hardly lay down thereafter. It was a night when Jürgen Klopp made changes and Manchester City wondered whether Liverpool would have enough.

“They did. Ahead of City’s trip to Wolves on Wednesday night, Liverpool moved level on points, returning the pressure on to them, after a performance of steel and rising levels of composure. They were not at their best and there were times when Villa got at their defence too easily.”

“The days are getting longer and the games are running out, but still Liverpool are clinging on to the edge of what remains a race for the Premier League title – tired, a little ragged and with another man down in their pursuit of Manchester City.

“Whatever lies ahead now, through Saturday’s FA Cup final and the Champions League in Paris in 17 days’ time, it might have to be won or lost without Fabinho who felt something give way in the first half at Villa Park.

“He departed with the game level and Steven Gerrard watching with furrowed brow as his team threatened to inflict some serious damage on what remains of the title challenge from Liverpool.

“Yet find a way Liverpool did, this time one of the last darts and twists down the left from the bottle of fizz that is Luis Diaz, crossing for Sadio Mane to angle his header away from anyone who might put glove or boot upon it.

“That was a classic Liverpool attack with the ball turned over swiftly and opponents in reverse but there was not much comfortable about the rest of it.”