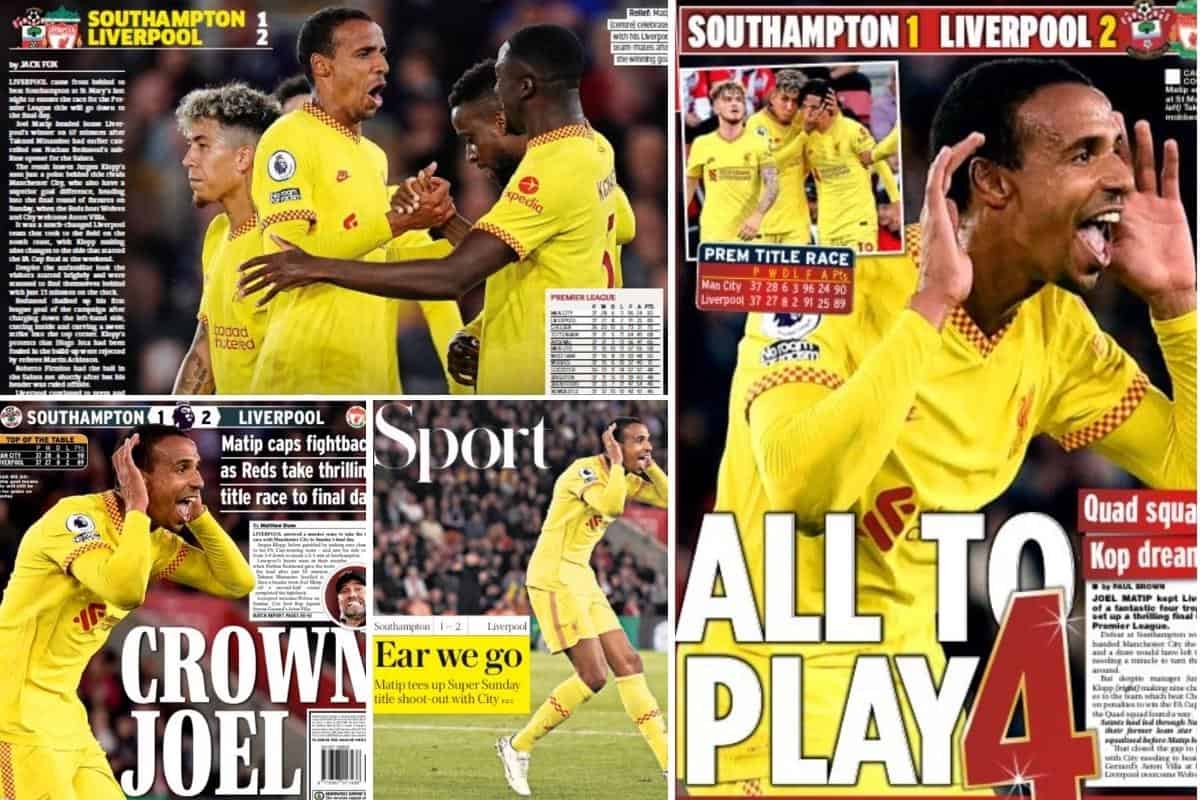 The watching media could again only admire Liverpool’s resolve as they came from behind to win 2-1 at Southampton and keep their quadruple dream alive.

Jurgen Klopp made nine changes to his side on Tuesday evening, taking a big-but-understandable gamble at St Mary’s, but it ultimately paid off.

After falling behind to a Nathan Redmond goal, Takumi Minamino equalised and Joel Matip headed the winner midway through the second half.

Here’s how the media reacted to Liverpool’s win, as they also looked ahead to a potentially famous final day of the Premier League season.

This team really is something special…

“Whoever said the title race was a marathon not a sprint possibly underestimated. How many marathons have Liverpool run to get here? More than just one, that is for certain.

“At St Mary’s they arrived with a second string. No Mo Salah, Virgil van Dijk, Fabinho, Thiago, Jordan Henderson, Andy Robertson, Trent Alexander-Arnold, Luis Diaz or Sadio Mane. They fielded James Milner beside Harvey Elliott, who was born 145 days after Milner made his debut for Leeds. And they went behind after just 13 minutes.

“Yet they won. They found a way, as they always seem to do.

“What these players provided was further evidence that this is a team that does not give up, that will go down fighting for this title, if indeed it goes down at all.”

“Liverpool are going the distance. And so is their pursuit of the Premier League title. It is a remarkable detail of their season that they will play in every game of the four main competitions, with the Champions League final against Real Madrid on Saturday week set to be the last one.

“Before that – and with the domestic cups already secure – they will attempt to complete the third leg of an unprecedented quadruple.

“Klopp rotated heavily, retaining only Alisson and Ibrahima Konate from the lineup that had started the FA Cup final defeat of Chelsea on Saturday and, for the opening 20 minutes, struggled for their bearings. Southampton were bright and they led through Nathan Redmond.

“But thereafter, it was an exercise in Liverpool reeling them in. Takumi Minamino, who was on loan at Southampton last season, got the equaliser and, although Joël Matip’s winner was undercut by good fortune, it was merited on the balance of play.”

“The changes made by Klopp certainly caused a stir once the teams were announced. The German opted for nine personnel tweaks following the FA Cup final on Saturday. Only Alisson and Ibrahima Konate were retained as the Reds boss attempted to juggle his resources.

“When Southampton went 1-0 up it looked as if Liverpool’s gamble may back fire with the Premier League final day still to come. The visitors quickly levelled however and would go on to pick up the three points, ensuring that the title race will go to the final day all while keeping some of his stellar names fresh.

“Klopp had been vocal about the lack of rest afforded to his team given they played 120 minutes at Wembley on Saturday. The German has long had issues with the fixture congestion in England, but his much changed side highlighted the depth of quality available at Anfield.”

The Liverpool Echo‘s Paul Gorst was of a similar thought process:

“The more things change at Liverpool, the more they stay the same for Jurgen Klopp.

“That statement is just as applicable to the raft of alterations in Klopp’s starting XI here at St Mary’s just as much as it is for the fate of his Premier League title quest.

“Nine changes were made in total for this 2-1 win over Southampton as the manager rested and rotated some key names after Saturday’s exacting, draining FA Cup final victory.

“But the outcome was exactly the same: Another Liverpool triumph. One that takes it to the final throes of a remarkable season.”

This Is Anfield‘s James Nalton showed his appreciation for Minamino, praising his goalscoring record this season:

“The Japan international has been on the fringes of the squad this season, and not even in it for many Premier League games, but his first-half goal was still his tenth of the season in all competitions.

“This was his third goal in the Premier League, which is even more impressive given it’s his first start in the league this season.

“It was an emphatic finish at the near post and showed his worth to this squad. Many regulars would be more than happy to reach double figures in the goals column, and Minamino to do it in the role he plays has been a credit to his application and talent.”

“Impeccable again. Just such an unreal presence, so calm and his distribution.

“Speaks volumes for his quality that I’m not arsed if him or Matip starts in the final.”

Meade was in awe of the “timeless” James Milner:

“The finest of fine wines. Before you even consider what he offers the club off the pitch, which you can’t quite put into words, the midfielder showed that age doesn’t seem to be hindering him on the pitch. Milner is now 36 and into his seventh year at Liverpool.

“He may not be the most glamorous name in Klopp’s side but boy is he effective. So often relied upon when things get tough, Milner was his side’s chief creative influence at Southampton. He created five chances in the first-half alone as Liverpool began to impose themselves on the contest after the Saints had taken the lead.

“An injury to Joe Gomez saw Milner drop back into a right-back role, which he has done on numerous occasions. His value to the Anfield outfit is seemingly unquantifiable.”

Onto the final day, then…

Jones called for the biggest of favours from Steven Gerrard:

“Jurgen Klopp can only hope. His side must take care of their own business first, of course. They must beat Wolves at Anfield and pray for good news from the Etihad Stadium.

“Stranger things have happened, even though you have to go back all the way to 1989 to find the last time the team that started the final game of the season top of the league failed to clinch the title. The losers on that occasion, of course, were Liverpool themselves.

“Whatever happens this weekend, Klopp can and will be proud of his players. What an effort they have put in this season, and what an effort they put in here on the south coast, in what was their 61st game of a gruelling campaign.

“One more miracle? Maybe, just maybe. Gerrard has produced enough of those for Liverpool down the years, after all…”

Nalton also looked ahead to Sunday, heaping praise on the Reds’ form to take it to the last day:

“Looking at the bigger picture, the Reds have won 14 of their last 17 games in all competitions, drawing the other three, and haven’t lost a game in the league this year, only dropping points against Chelsea, Man City, and Spurs.

“It’s an unbelievable run, especially when you factor in the cup wins, but such near-perfection has been needed to keep the title race alive.

“According to Sky’s EPL-only marketing, this is the ninth time since the Premier League rebrand that a title race has gone to the final day. It’s taken some effort from Liverpool for it to do so.”

Speaking with Jamie Carragher and Jamie Redknapp on Sky Sports, Jordan Henderson joked that he will give Gerrard a call this week:

Jordan Henderson hopes Aston Villa can do Liverpool a favour in their quest for Premier League glory ? pic.twitter.com/036sUcn86h

Finally, Sam Wallace of the Telegraph talked up the Gerrard narrative:

“To the final day of the season, and although Liverpool’s chances of winning a 20th league title remain somewhere between a wing and a prayer, there is something about the way in which they keep coming back for more that makes you wonder.

“Over to Pep Guardiola and Steven Gerrard now, for the final decisive act of this Premier League season at the Etihad Stadium on Sunday where a win for the home team will deliver the Catalan’s fourth title in five years.

“But if it should transpire that arguably the greatest player in the history of Liverpool, and famously never a league champion there, can cause a monumental upset, then it would seem that Jurgen Klopp and his players are ready to pounce.”