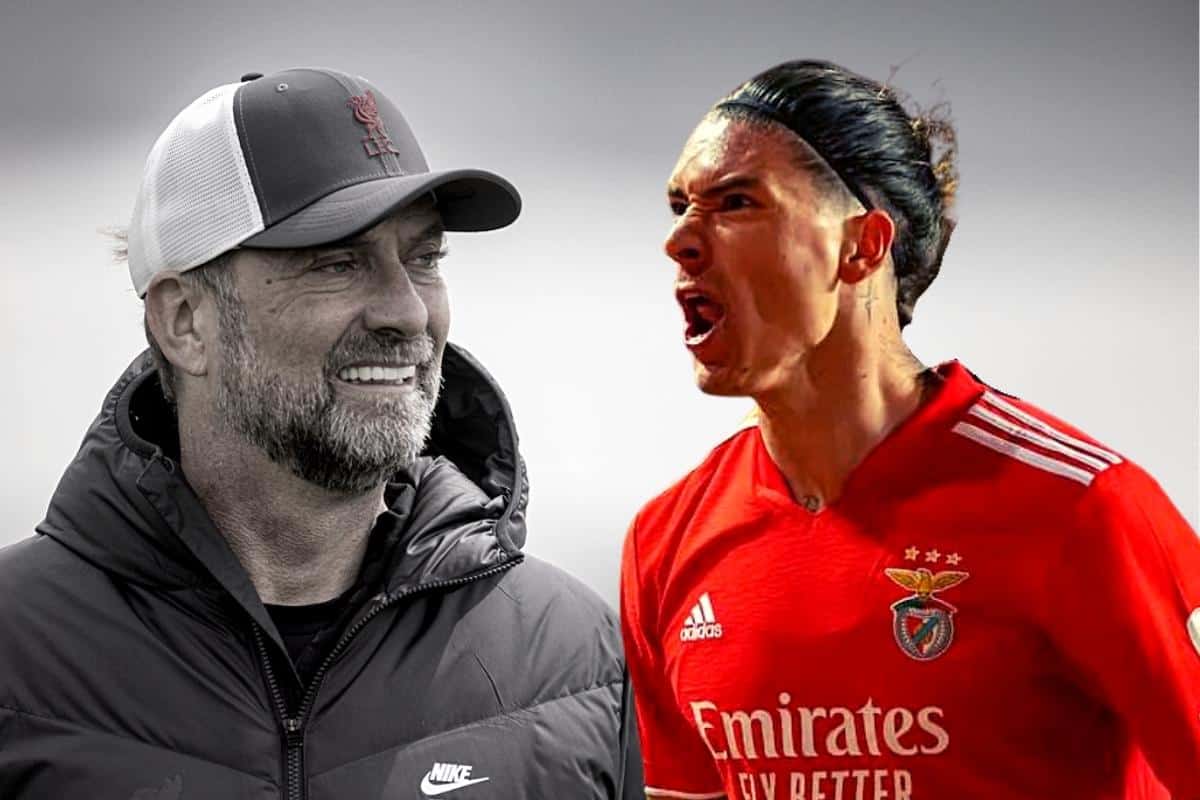 Liverpool’s pursuit of Benfica’s Darwin Nunez has caused a ripple of excitement among fans, but also thoughts of how his acquisition could be part of Jurgen Klopp‘s steady evolution of his side.

The interest in Nunez continues to heat up, with Wednesday’s reports saying the Reds are “prepared to smash their transfer record” to land the forward, with an £85 million fee touted.

The 22-year-old received praise from Klopp when Liverpool met Benfica in the Champions League earlier in the year, with the manager saying he is “Physically strong, quick, plus calm around his finish.”

Nunez’s flexibility across the forward line opens up a door of possibilities should a move to Liverpool eventuate.

Don’t know enough about Darwin Nunez to comment on how he could/would fit in at Liverpool but feels like he could be the the next step in the evolution of the side – specifically into one that plays with a conventional No9. Maybe that also means a change from 4-3-3 to 4-2-3-1.

The most appealing thing about Nunez is the pace COUPLED with in the box threat that will be so vital against deep blocks and defensive sides.

Can see us playing 4-2-3-1 next season with Carvalho and Elliott getting plenty of minutes in the no.10 behind Nunez. #lfc

Carvalho thrived behind a more traditional No.9 in Mitrovic at Fulham, and his ability to get into the box is something Liverpool could really use to good effect.

Jurgen Klopp going for a Liverpool version of his Dortmund 4-2-3-1? pic.twitter.com/2gHaBTPPiB

And while the fee is eyewatering, there is plenty of trust in Liverpool’s recruitment team and strategy after years of success:

People stressing over the transfer fee should understand that Liverpool Football Club would never spend that kind of money unless they know they are getting a real talent. Nunez would be a sensational signing to replace Sadio Mané.

Darwin Nunez against Liverpool in the Champions League this season. pic.twitter.com/7eVnyFO1HY

I'd caveat it with the fact that Liverpool were missing VVD and the way he Marshall's their offside trap and the fact that there was a bit of complacency after the first leg, but Darwin Nunez was superb at Anfield in a CL knock out tie. That's quite a feather in the cap

A classic number 9 on the end of Trent's crosses pic.twitter.com/knx1ayFtFn

Right.
If we are willing to pay that money for Núñez, it shows we really, really rate him.
Liverpool’s recruitment team have done well enough to earn my trust, at this point.

The reported fee of £85 million is a substantial one for Liverpool to part with for one player, a figure that would be a club record that bests the £75 million the club parted with for Virgil van Dijk.

News of the interest and discussions with Benfica represents an exciting development and could well yet trigger another tactical tweak from Klopp and co.