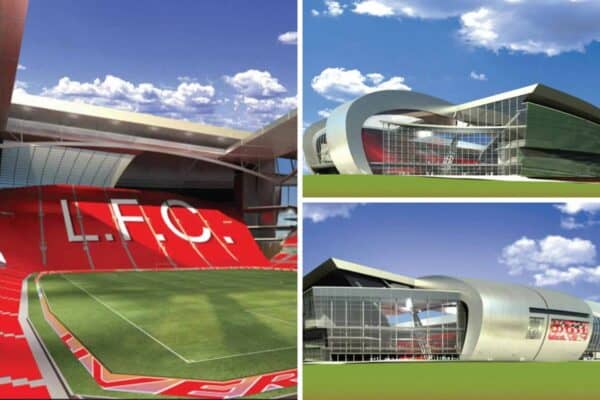 It’s now been 15 years since Liverpool unveiled their plans to leave Anfield for a new stadium in Stanley Park.

In July 2007, under the ownership of Tom Hicks and George Gillett, Liverpool announced their intentions to move into a new 60,000-seater stadium in the north of the city in 2010.

It would turn out to be one of three new stadium plans that never happened for Liverpool.

So why did the proposed Stanley Park plans never come to fruition?

What were the stadium plans?

Initial plans for a move to Stanley Park, which were drawn up five years earlier, eventually became known as ‘The Parry Bowl’ among supporters.

Ultimately, funding would prove an almighty struggle and the plans would be left on the shelf for another to pick up.

Hicks and Gillett were, unfortunately, the ones to pick up the baton with grand plans in which they were all talk but couldn’t walk the walk.

As plans for the move were announced, planning application was submitted to Liverpool City Council and the wheels were put in motion for the Reds to leave Anfield three years later.

“It has always been the aim of the club, with the backing of Tom Hicks and George Gillett, to be world class both on and off the pitch,” said Rick Parry, who was Liverpool chief executive at the time.

Why didn’t they happen?

An abundance of excuses for the lack of movement on breaking ground would be made and many soon wised up to what Hicks and Gillett’s ownership would entail.

The plan was to be scrapped after a meeting between US architects HKS and Liverpool City Council.

In their original press conference after taking over at the club, Gillett promised work on Liverpool’s new stadium would begin immediately, saying: “The spade has to be in the ground within 60 days.”

Then came another redesign as Hicks and Gillett rejected their expensive previous ones in favour of a scaled-down version with the architects who drew up the first plan back in the early 2000s.

That, of course, wouldn’t happen either. A total mess.

Thankfully, the club have come a long way since those days.

It certainly didn’t happen overnight, but Liverpool are once again a leading example of a football club both and off the pitch.

By bringing current manager Jurgen Klopp to the club in 2015, current owners Fenway Sports Group have overseen an era of immense success, and the Reds also have the stadium to show for it.

In the early stages of FSG’s time at the club, the idea of a move to Stanley Park was still being flirted with, before focus shifted towards expanding Anfield.

Despite the long wait, the expansion has proved to be a great success. The redevelopment of the Main Stand was completed in 2016, adding around 8,500 new seats and making it one of the largest all-seater single stand’s in European football.

Now, work is well underway on expanding the Anfield Road End, with the roof truss recently lifted into place and work due to be completed next summer.

Anfield is Liverpool’s home, and it always should be.