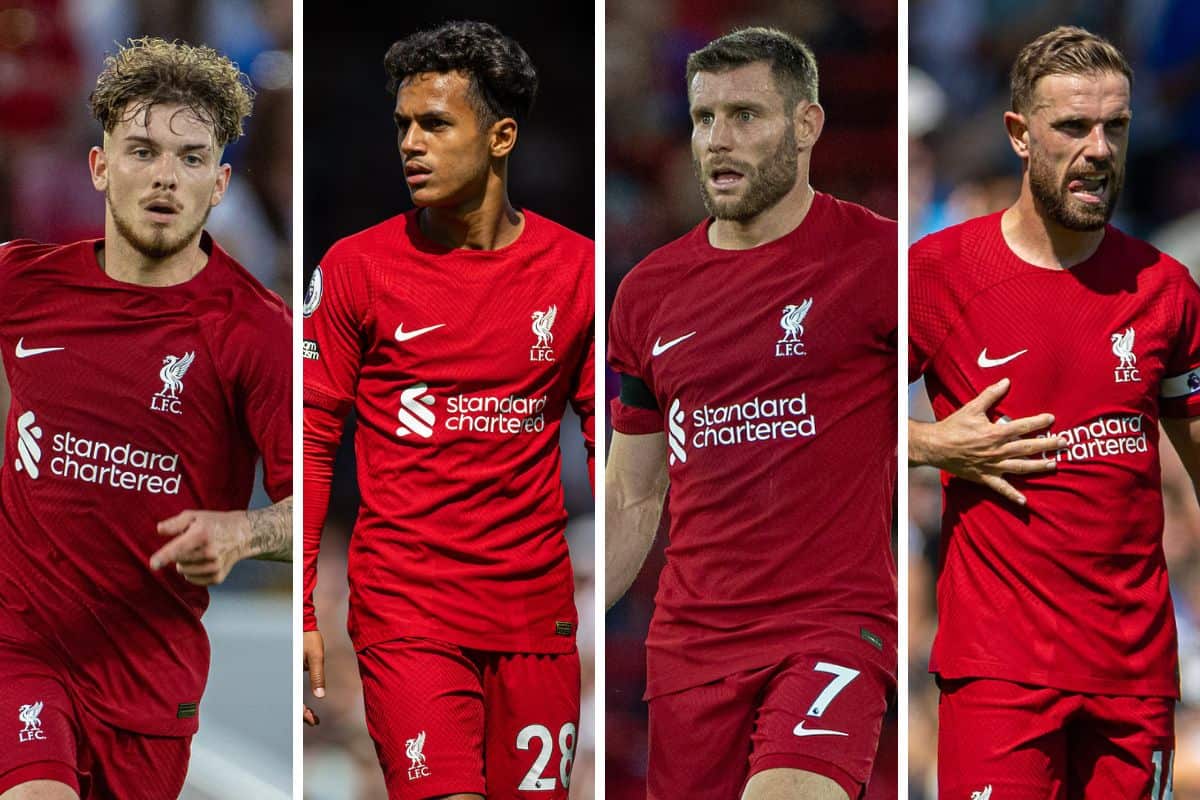 Jurgen Klopp is in no doubt that the rest of his midfielders will step up in the wake of the hamstring injury Thiago sustained in Liverpool’s Premier League opener at Fulham.

The Spaniard’s absence, which the Liverpool boss remained coy on in his pre-match press conference on Friday, opens up an opportunity for some other midfielders to impress.

Curtis Jones and Alex Oxlade-Chamberlain remain sidelined, but the likes of Harvey Elliott, Naby Keita, Fabio Carvalho and James Milner are in contention to play a more prominent role in Liverpool’s team in the coming weeks.

Elliott is many people’s favourite to step in after replacing Thiago against Fulham and playing a vital part as the Reds managed to salvage an opening day draw in the second half.

“Yeah he is always,” Klopp said when asked if the 19-year-old was in his thoughts about a possible start against Palace.

“He’s a fantastic boy, super player. Came on (against Fulham), had a real impact, and played a very good pre-season.”

The England under-21 international penned a new long-term contract on Thursday, perhaps an indication of the important role he could play in Klopp’s side this season.

Elliott did, of course, start the first three games of the last campaign, before a nasty ankle injury sustained against Leeds last September hampered his progress.

Klopp says Elliott is one of a number of players who can step up and is clearly has no doubts about his ability.

“Everybody has to just make the next step in their development, that’s normal,” Klopp continued.

“How I said, Harvey played at an incredible level already, then got injured and that’s it.

“Does he have to step up? Yeah, but like all the others as well.”

Aside from Elliott, though, there are several other options at Klopp’s disposal.

Carvalho impressed in his first pre-season with the club and was another who came on to make an impact against Fulham, while Klopp continues to talk up the contributions 36-year-old James Milner could make on his team this season.

“We have injuries, but I expect from the boys that they, over the time we worked together, and of course, sooner rather than later, they fulfil their potential.

“That’s what I’m looking for and Harvey’s on a good way, that’s how it is, and Fabio didn’t even start and he’s on a good way as well, so that’s cool.

“Milly looks sharp. Does he have to step up? He showed already a lot. These kind of things.

“Hendo played good in the six when we had to move him inside, so there is still competition for places with the players we have and these kind of things.”