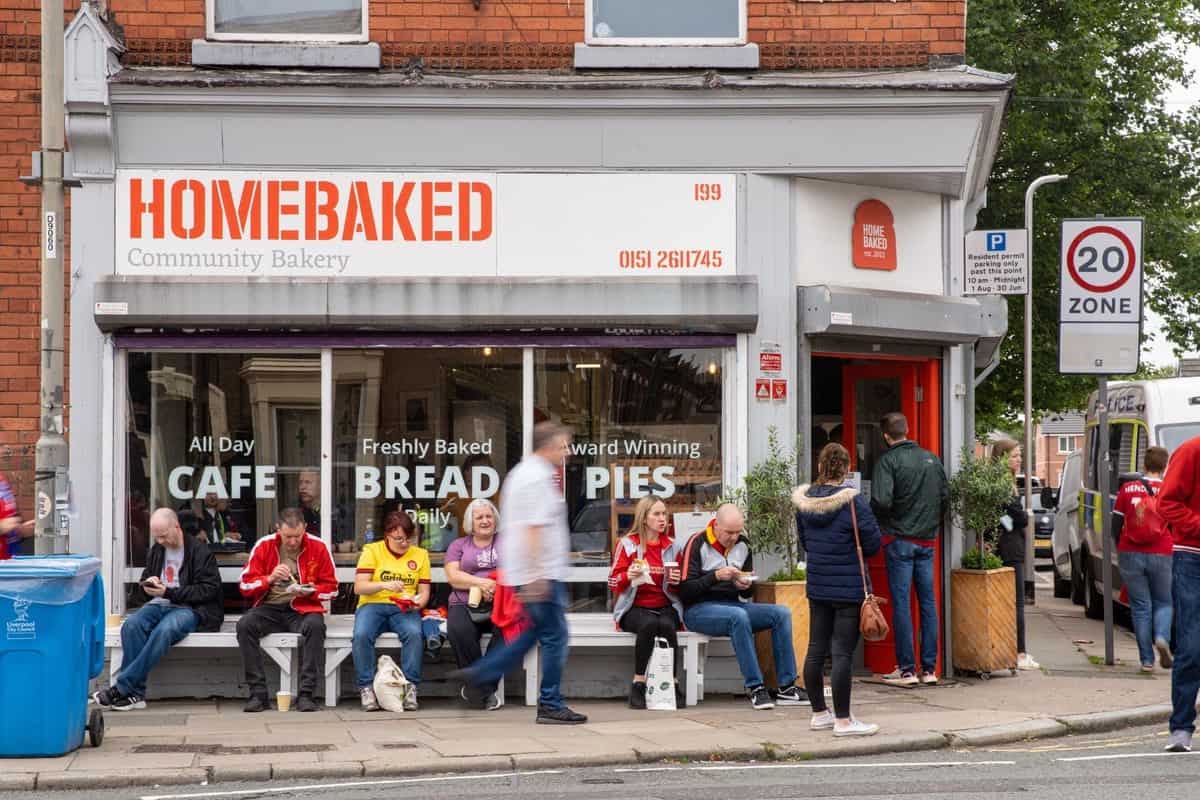 Small businesses in the Liverpool and Anfield area have explained the negative impact the Premier League‘s decision to cancel this weekend’s fixtures will have on their companies.

On Friday morning, with a little over 24 hours notice, the Premier League announced that all 10 of this weekend’s fixtures, including Liverpool vs Wolves, were being postponed “as a mark of respect” for the Queen, who passed away on Thursday.

Some fans have questioned the decision to cancel the matches at such short notice, pointing out the impact it has on hundreds of thousands of people who have spent money arranging travel and tickets during a financial crisis.

Small businesses will also be hit hard, with local companies relying on the income they create around sporting events of a weekend.

One of the most prominent small businesses in the Anfield area is Homebaked, a non-profit, community-owned bakery that do a lot of their main trade on matchdays.

We hope tomorrow’s game can go ahead, not out of greed for ourselves (we are a community owned bakery) but for the other countless positive impact Matchdays bring to our area, our people and our local businesses

It’s a lot more than just 90 minutes of people kicking a ball… https://t.co/uHBTJQUhUa

Before the Premier League announced their decision, Homebaked posted a tweet explaining why they did not want the matches to be postponed.

Following news that Liverpool vs Wolves would not go ahead, the local Anfield business published a statement expressing their disappointment with the Premier League‘s decision to cancel the latest round of fixtures.

“We are very disappointed with tomorrow’s game being postponed at such short notice but respect the decision has been made in-light of a very sensitive moment for a majority of people in the country,” a Homebaked statement read.

“As we said earlier, the impact of the game being cancelled at this late stage is a lot more than just profit/losses for us, our staff and other local businesses – especially in this moment in time more than ever with the cost of living crisis we find ourselves in.

“Not only the above, but the generous donations on a matchday help to underpin the great work that Fans Supporting Foodbanks are doing in order to try and curb the food poverty that we have on our hands in our city.

“We do however again stress that we understand the decision is one that has been made with sympathy and respect & are now just hoping that Tuesday’s game vs Ajax can go ahead as planned.

“Homebaked Bakery will be open tomorrow from 8:30am as usual and our cafe at St George’s Hall open from 9am as usual too.

“If you are still going to be in the local area or city centre please make sure to pop in and buy a pie!

I expect them to cancel the football tomorrow but that's bad news for @TheFanzine1 cos I've got a box of unsold Fanzines here. I'm not being disrespectful, but I don't see why they should cancel sport everybody else will go to work.

Another local business to express their disappointment was Red All Over The Land, the last remaining print fanzine relating to Liverpool FC.

Copies are sold for £2 around Anfield on matchday, which won’t be possible this weekend.

Away from football, several other sporting events are going ahead as planned, which makes the Premier League‘s decision all the more baffling.

This isn’t just about the game that’s played on the pitch.