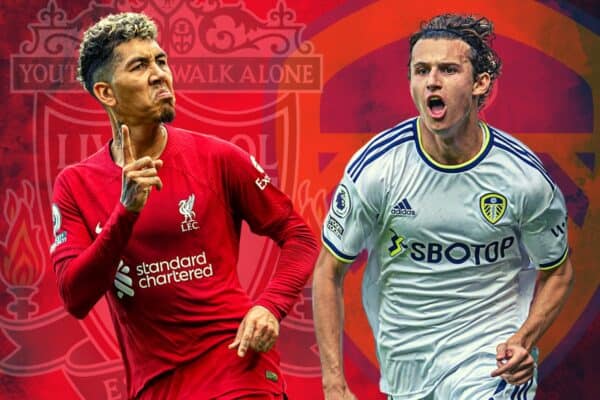 10 key things to know ahead of Liverpool vs. Leeds

Aside from a dreadful performance and result against Nottingham Forest last weekend, Liverpool’s form has been slightly more encouraging in recent weeks.

Wednesday’s 3-0 win at Ajax saw them book their spot in next month’s draw for the Champions League knockout stages, and Jurgen Klopp‘s side must now ensure they follow up one positive result up with another when Leeds make the trip to Merseyside on Saturday.

7.45pm is a strange kickoff time for a Saturday, with this game originally scheduled to take place on Sunday, before being brought forward a day so that the Reds’ final Champions League group game against Napoli can take place next Tuesday.

Here, we run through 10 key things you need to know before Liverpool’s latest Premier League outing.

A good time to play Leeds? It certainly looks like it.

After taking seven points from their opening three league matches, Marsch’s side have not won any of their eight games since, and now find themselves in the relegation zone with only Wolves and Nottingham Forest behind them.

They’ve lost four league games on the bounce, with a 3-2 home defeat to Fulham their most recent result.

Marsch believes their performances have deserved better, but you can’t help but think his job will be in danger should their form not improve before the World Cup.

“I’m a little angry right now. I’m tired of playing matches where we’re in the match and in many cases we’re better than the opponent and walking away with nothing…” the Leeds boss said ahead of their meeting with Liverpool.

“Fourteen years as a player, 13 years a coach and I’ve never lost this much in my career. I’m sick of it.”

2. And their injuries are piling up…

Leeds could be without as many as eight players heading into this one, with two definitely ruled out and six other injury doubts.

“In addition, questionable are Leo Hjelde, after his appendectomy, and then Joffy [Gelhardt], Rodri, Luis [Sinisterra], Liam [Cooper] and Tyler [Adams] are all a little bit in question.”

Ordinarily, four to five of those players would be in Leeds‘ XI, namely Rodrigo and Sinisterra – who have combined for seven of their 13 league goals this season.

There are now just two weeks until Liverpool’s campaign grinds to a halt for the World Cup, with this the first of three more Premier League games before the break.

Tottenham are next weekend’s opponents, before a home clash with Southampton on November 12.

In between those matches are the Reds’ final Champions League group game against Napoli, and a League Cup encounter with Derby.

Last Saturday’s defeat at Forest was a real blow, but if Liverpool can pick up maximum points in the league before the break, they should be within touching distance of the top four and in a good place to push on when the season resumes after Christmas.

4. Klopp WILL be on the touchline

On Thursday, it was confirmed that Klopp would not be handed a touchline ban following his sending-off against Man City, but has been served a £30,000 fine.

The manager was officially charged by the FA last week for his late dismissal in the victory over Man City, with his actions described as “improper.”

A response was required to the charge prior to the trip to Nottingham Forest, leaving Klopp not “100 percent” sure if he was to be allowed on the touchline.

No ban was forthcoming before the match and will not be forthcoming at all, meaning he is free to be on the touchline against Leeds on Saturday and so forth.

Speaking in Friday’s pre-match press conference, Klopp revealed Thiago had recovered from the ear infection that kept him out of the Forest and Ajax matches.

Jordan Henderson is a slight doubt, after picking up a knock in Amsterdam, but the boss is confident his captain will be available.

“With Hendo we have to wait a little bit. It’s a knock, the knee was a bit stiff yesterday, he only had treatment yesterday,” Klopp told reporters.

“So we will see how it will be today. I expect him to be OK, to be honest.

Plenty to ponder for the boss in terms of team set up for this one.

Liverpool lined up in a 4-4-2 diamond formation in Amsterdam on Wednesday, and after a shaky first half an hour, you’d have to say the game plan worked pretty well, considering the Reds went on to win 3-0.

So does Klopp stick with that system, with Roberto Firmino behind Mohamed Salah and Darwin Nunez again, or could he revert back to a 4-4-2 or 4-3-3?

With qualification for the Champions League last 16 already secured, Tuesday’s group finale against Napoli should give the manager the opportunity to rotate, so expect another strong XI against Leeds.

Here are two potential ways Liverpool could line up on Saturday night.

7. What else has Jurgen had to say?

Plenty about Nunez, including reference to his impressive xG record this season!

“His numbers are incredible, to be absolutely honest.

“And I’m pretty sure his xG is pretty high as well, he had a few chances that he missed, but he’s scored as well, and he’s involved in a lot of finishing moments, a lot of things.

“The steps he’s making are really big, and that means that he settles in more and more. A great month for him…

“The potential is incredible. It’s not only speed, the attitude is really good, he’s a real worker, and again I tell you, I know there’s some people who think ‘technically, not sure, first touch’, it’s incredible.

“That he doesn’t bring it on the pitch at the moment all the time, his first touch might be here or there sometimes, it’s nothing to do with technique.

“It’s just a bit too late, awareness, orientation and all these kind of things, but that’s all possible to develop and to learn obviously, and that’s where we’re at.”

Liverpool are unbeaten in 12 fixtures against Leeds in all competitions.

If the Reds avoid defeat they will record a 30th successive home league game unbeaten, which would be their joint-sixth longest run at Anfield in history.

They are undefeated in the last 84 league outings at home in front of fans, since losing to Crystal Palace in April 2017.

9. Oliver in charge, for first time since Arsenal defeat

The last Liverpool game Michael Oliver took charge of was fairly eventful, to say the least.

It certainly wasn’t his best day at the office.

Oliver has been in charge of the last two Anfield meetings between Liverpool and Leeds, a 4-3 win and a 6-0 win for the Reds.

Let’s hope for a similar result on Saturday.

Liverpool vs. Leeds is being shown live on Sky Sports Main Event and Sky Sports Premier League in the UK, with kickoff set for 7.45pm.

If you fancy a more biased take on proceedings then This Is Anfield’s matchday live blog is the place for you, with Sam Millne to keep you company and up to date on all the action.