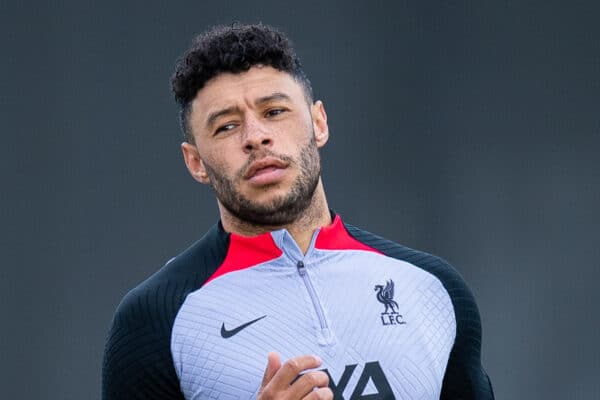 Alex Oxlade-Chamberlain is a step closer to making his return from a long-term hamstring injury, with the midfielder part of light training on Tuesday.

It has been almost three months since Oxlade-Chamberlain suffered a serious hamstring injury in the 2-0 friendly win over Crystal Palace in Singapore, serving as another setback for the No. 15.

He has already missed 12 games this season, but has been working on his fitness in recent weeks as he nears a return to full training.

Tuesday saw him take another step in his recovery, with Oxlade-Chamberlain part of the Liverpool squad warming up at the AXA Training Centre ahead of the trip to Rangers.

The 29-year-old took part in initial drills and ball work before separating from the group to continue an individual training programme, with his workload suggesting he is close to a comeback.

Most recently, Jurgen Klopp revealed that the Englishman would be back “somewhere in October,” as was the case for Naby Keita.

However, the pair were not registered as part of Liverpool’s squad for the Champions League group stage, suggesting there are no plans for a role between now and the end of the month.

Oxlade-Chamberlain’s imminent return comes amid an ongoing injury crisis for the Reds, with Joel Matip, Luis Diaz and Trent Alexander-Arnold joining Keita and Arthur on the treatment table.

There was no sign of Calvin Ramsay in training on Tuesday, either, and with the right-back having been left out of the squad at Arsenal, there is a chance he has suffered a new issue.

Beyond Oxlade-Chamberlain, a 23-man squad worked in Kirkby, with Andy Robertson available again following a hamstring injury of his own.