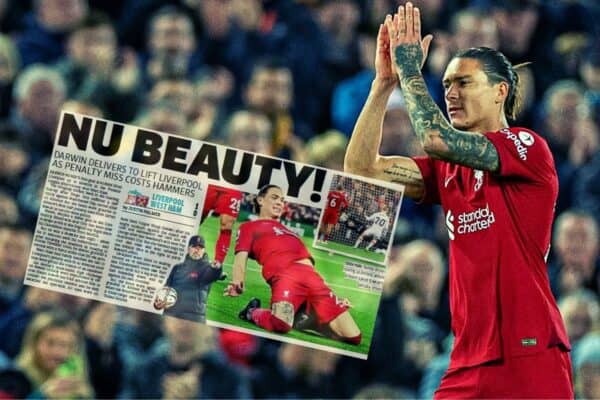 Liverpool weren’t at their brilliant best against West Ham, but further signs of a big recovery were touched upon by the media at Anfield.

Jurgen Klopp‘s team battled their way to a gritty 1-0 win on Wednesday evening, with Darwin Nunez‘s goal edging out the Hammers.

It was another priceless three points, as the Reds continue to battle their way back in contention in the Premier League top-four battle.

Here’s a look at how the media reacted to Liverpool’s hard-earned victory.

“Same result as the weekend for Liverpool, just none of the aggravation.

“While Sunday’s one goal win over their great modern rivals Manchester City was born of the fire and the fury of a desperate Anfield, this was a result altogether more calmly earned.

“No need for Liverpool manager Jurgen Klopp to grow particularly agitated here either. His team were simply better than a West Ham side largely devoid of ambition. Sometimes, that’s all it takes.”

David Lynch took to Twitter to talk up the importance of not dropping sloppy points after the win over Man City:

Absolutely vital for Liverpool not to let that Manchester City win go to waste by dropping points tonight. A bit nervy towards the end but they got over the line thanks in no small part to having probably the best goalkeeper in the world.

“If there is something tangible to be found at the end of this Liverpool season, then the last seven days might just prove to be seminal for Jurgen Klopp.

“After reigniting their spark with seven goals at Rangers last week, back-to-back home victories by the slender margin of 1-0 against Manchester City and West Ham United may have finally got the Reds rolling in the Premier League.

“If they are to scale themselves back up towards the loftier heights in this division, it has to be built on home form first and foremost. This, after all, was just Liverpool’s fourth win in 10 this term.

“There is a sense, however, that this group of players are starting to regain their confidence, their swagger and, most importantly of all, their identity.

“Six more points are available for Klopp’s men at Anfield before the pause for the World Cup and a maximum return against Leeds United and Southampton simply has to be the outcome.”

Others had to hail Nunez and Alisson’s brilliance…

Goal‘s Neil Jones felt it was as pivotal night for Nunez:

“You can say what you like about Liverpool’s £64m man, but you don’t want to take your eyes off him. It’s been a while since Reds fans had a firebrand Uruguayan striker to enjoy, but Nunez, like Luis Suarez before him, looks like he has the tools to be a firm favourite at Anfield.

“He’s certainly box office, a magnet for shots and a ball of energy whenever he steps onto the field. And here, for the first time for his new club, he was the matchwinner, his superb first-half header settling an attritional, at times nervy contest.

“He clearly has talent, and he looks like he has bundles of belief as well. His work ethic has endeared him to his new supporters, and though his game ended, rather surprisingly, early in the second half when he was replaced by Harvey Elliott, he can reflect on a good night’s work. Another one.”

This Is Anfield‘s Mark Delgado focused on the Uruguayan’s “brilliant” performance:

“The goal itself was a really good header, fine movement between two centre-backs to make the most of Kostas’ great cross.

“But aside from the efforts on goal was a whole lot of work rate, channel running, chasing back, giving poor Ben Johnson nightmares to rob him and stop him playing out, even tackling back in the left-back zone.

Mark Critchley of the Independent lauded both Liverpool “match-winners”:

“If Sunday’s win over Manchester City is to be the springboard that Liverpool’s stuttering season required, then perhaps this narrow and nervy victory over West Ham United can provide the same for their marquee summer signing.

“The hope will be that Darwin Nunez’s first Anfield goal is a catalyst for a career that is beginning to show shoots of potential, if this match-winning display is anything to go by.

“He was not the only match-winner, though. Nunez’s first-half header was the only goal of the game but Alisson prevented at least two others, saving Jarrod Bowen’s penalty on the cusp of half time and denying Tomas Soucek what seemed certain to be a late equaliser.”

The Mirror‘s Tom Victor feels Liverpool are almost too reliant on Alisson at times now:

“Liverpool’s faith in their goalkeeper has arguably swayed into overreliance of late, and those in front of the Brazilian will remain desperate to make things easier for him.

“Until that happens, though, few will complain about Alisson‘s importance if he’s winning vital points for his side.”

And momentum is building…

Ladyman feels Liverpool now have real momentum after an upturn in fortunes:

“Momentum. That is what this was all about.

“Having started the season so poorly, Klopp’s team now have an opportunity to build.

“Given the injuries that have afflicted Klopp’s squad – forwards Diogo Jota and Luis Diaz will not play for a while – it would be a realistic aim now for Liverpool to simply be in touch with the top four by the time we break for the World Cup in a month’s time.

“Given where they were after defeat at Arsenal a week and a half ago, that would represent progress. Liverpool would have a platform. But, dramatic as it was, it would have meant very little had it not been followed by another victory here.”

Finally, Delgado was another who feels the Reds are slowly turning a corner:

“It’s two wins in a row in the league, and at the weekend against Forest we have the chance to win three in a row for the first time this term.

“On a wider lens view, it’s three straight wins and four in five across all competitions. As Klopp has said, confidence and rhythm has to come back bit by bit, game by game, win by win.

“It is absolutely imperative therefore that we didn’t waste that big weekend showing tonight, and continue to not do so at the weekend.

“That’s where we came from and where we must get back to.”