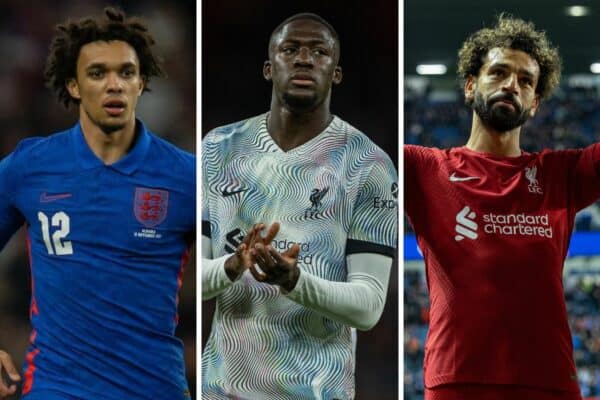 In Friday’s Liverpool news round up, a key player was not pictured in training as the Reds prepare to host Man City on Sunday, while Trent Alexander-Arnold‘s chances of being included in England’s World Cup squad could have been boosted.

As Liverpool trained at the AXA on Friday, one key player appeared to be absent.

Ibrahima Konate was nowhere to be seen in any of the images from the session, which has led to concerns over his availability ahead of this weekend’s clash with the Premier League champions.

Jurgen Klopp was noticeably coy on the injury situation in his pre-match press conference, claiming he was yet to find out who would be available, without naming any names.

Having only recently returned from a knee injury that his kept him out of action since the end of July, Konate made his first start of the season against Rangers on Wednesday, completing 78 minutes, having come off the bench against Arsenal.

It was assumed that his withdrawal at Ibrox was just a case of Klopp managing the Frenchman’s workload, but his absence from Friday’s session has led to concerns that he may have picked up another injury.

However, it’s worth pointing out that Thiago missed last Friday’s session ahead of the Reds’ clash with Arsenal, before playing the full 90 minutes at the Emirates two days later.

With Joel Matip also sidelined, Konate’s absence would likely mean that James Milner would have to play at right-back against City, with Joe Gomez alongside Virgil van Dijk at the heart of the defence.

Let’s hope this is just another case of the club protecting an important player during a hectic period of the season.

3 things today: Are the World Cup stars aligning for Trent?

The fastest hat-trick in #UCL history ?

Have a good weekend, Reds!