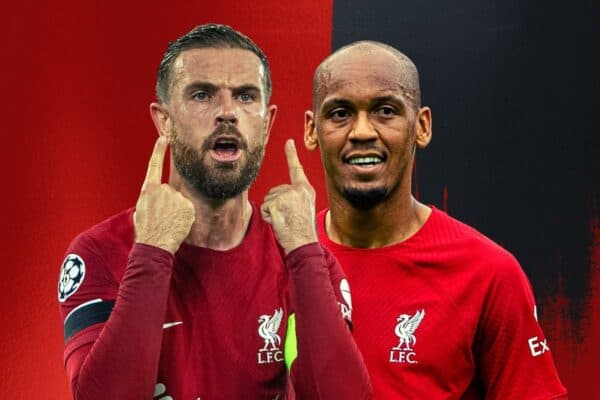 Liverpool lineups vs. Man City with Fabinho or Jordan Henderson to start?

Jurgen Klopp knows to expect a real “challenge” against Man City, with his side needing to be “cheeky” and “flexible” to cause Pep Guardiola’s side issues.

The Reds return to Anfield comes off the back of a 7-1 win at Rangers, a match that saw Mohamed Salah score a hat-trick, Roberto Firmino net a double, Darwin Nunez score and Diogo Jota collect three assists.

“What can I say, the best thing you want for your strikers is that they score and they all scored or were all involved in goals and that’s good,” Klopp told reporters on Friday.

Question is, will they all start against City in a continuation of the 4-4-2 formation?

The manager has his options but did hint at fitness issues in his squad, so who could start on Sunday afternoon?

The manager was coy with his team news ahead of Sunday’s clash, hinting at issues before Ibrahima Konate failed to be spotted at training on Friday:

There is certainly a risk in playing with four attackers and two midfielders against Guardiola’s side but after three games in succession with the system, you expect Klopp to stick with it.

Salah excelled in the central role at Rangers in mid-week but the manager was quick to downplay a switch as he insisted the hat-trick performance didn’t have “too much to do with the position.”

The Egyptian will be one change from midweek, with another likely to come at left-back following the return of Andy Robertson, while Thiago will be expected to play a prominent role:

The four changes from midweek would see Liverpool set up like this:

You never want to read too much into who isn’t pictured in training as was the case pre-Arsenal when Thiago was missing, only to start and play the full 90 minutes at the Emirates.

But with Klopp hinting at an issue and other senior players all accounted for, this is how Liverpool could cover Konate’s absence, if he does have to miss out:

Those tweaks would see the Reds line up as follows:

Man City arrive as the joint-top defensive unit and the league’s top goalscorers with 33, to which Erling Haaland is responsible for 15 (45 percent).

It doesn’t need to be said that Liverpool have to be at the top of their game, but while City’s strengths are clear the Reds cannot afford to think only of the opposition and not themselves.

“Usually the problem is that they are that impressive and dangerous in all the things they do that sometimes you forget that you can cause them problems as well,” Klopp said.

“That’s a normal reaction on pressure. But we have to remind ourselves that’s possible and then we will see what we can do with that.”