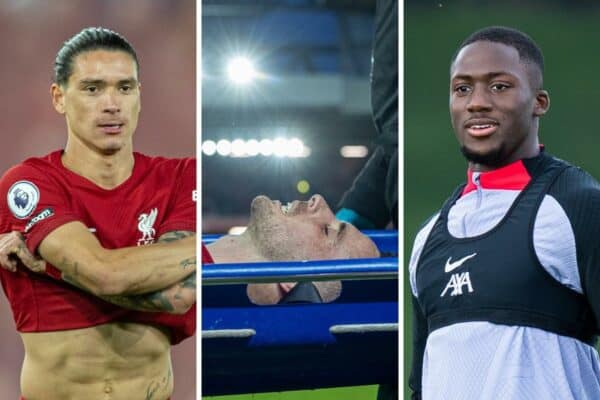 On the eve of Liverpool’s trip to Nottingham Forest, Jurgen Klopp still doesn’t know if he can be on the touchline, while there was mixed news on the injury front.

It’s a line we’ve heard from Klopp in the years gone by after serious injuries to his players and it is no different for Diogo Jota with his calf, which doesn’t paint a pretty picture.

The No. 20 is to be sidelined for a number of months after pulling up late in the win over Man City, ending his World Cup dreams and leaving him unavailable to Liverpool for the foreseeable.

On crutches and with all focus on his rehab, Klopp has spoken of how he had to give Jota a hug when he saw him on Thursday before dusting off one of his well-used lines.

“When I saw him yesterday on crutches and he wanted to shake my hand, I had to give him a hug,” Klopp told the club’s official website.

“I said, ‘It’s more for me than for you, to be honest’ because it’s a shame, the whole thing: how it happened, that it happened, when it happened, all these kind of things.

“But he is incredibly strong, it’s unbelievable. He is a role model in that.

“So, it will take time and we have to give him time but like I said previously in different situations, we will wait for him like a good wife waits for her husband in prison.”

A clear indication, if his past use of the phrase is anything to go by, that’s it’s a long layoff.

In other injury news, Ibrahima Konate and Naby Keita are to be involved in full team training from Monday on, with a plan for some extended training for the latter having not played since the Community Shield.

There’s also to be a wait to see if Darwin Nunez is fit for the trip to Forest after a hamstring complaint in midweek, fingers crossed!

"I didn't hear the chant. If it happened, I'm so sorry. It does not what we are as a team, as a club.

The internet is too quick. ?? pic.twitter.com/lx47ZEOz4t

There’s no Premier League action tonight but Juventus host Empoli in Serie A (7.45pm) and it’s Ipswich vs. Derby in the Champioship (8pm) – the Reds meet Derby in the League Cup in November.