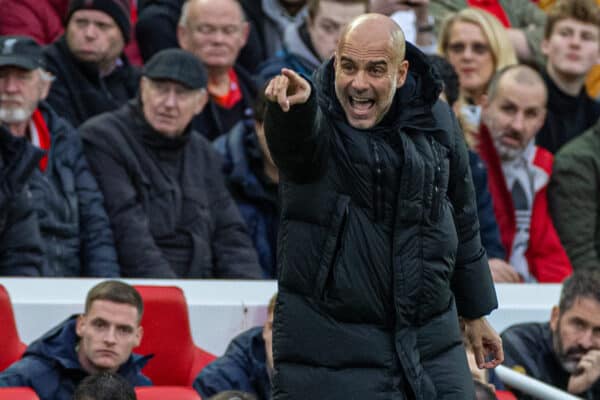 With Man City still refusing a public apology for their fans’ Hillsborough chants at Anfield, Pep Guardiola has made a half-hearted attempt of his own.

Throughout a fiery clash between Liverpool and Man City, away supporters could be heard chanting a number of Hillsborough songs, while graffiti was daubed on the Anfield concourse.

Liverpool released a statement shortly after the 1-0 win condemning “vile chants” from City fans, but five days on, the Manchester club are yet to do the same.

Instead, their only comment on the situation came in a private email to Hillsborough campaign Charlotte Hennessy, apologising and vowing to “sanction those individuals who are found to be responsible for such behaviour.”

Though it serves as a step forward, it is far from enough from a club who, via media channels, have blamed Jurgen Klopp for stoking the flames of their rivalry ahead of kickoff.

And in a press conference on Friday afternoon, Guardiola did little more to soothe the situation with a half-hearted apology – “if it happened.”

“I didn’t hear the chant. If this happened, I’m so sorry,” he said.

“It does not represent what we are as a team, as a club.

“But don’t worry, we can behave perfectly without mistakes, without a problem.”

Asked whether he believes the rivalry between Liverpool and Man City has become ‘toxic’, Guardiola replied: “I don’t think so. From our side, I’m pretty of that.”

The Spaniard’s sincerity in these words is certainly up for debate, which does nothing to improve the relationship between the two clubs and their supporters.