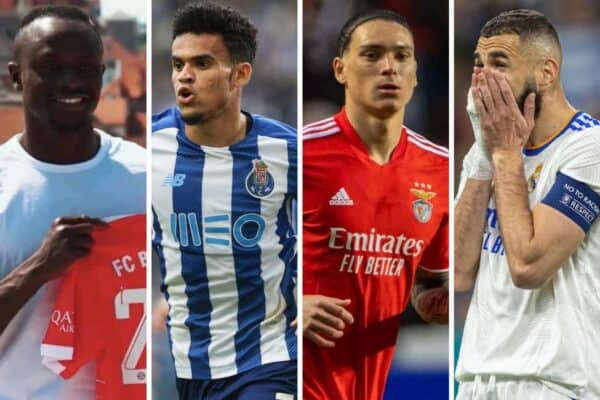 “Benfica or Porto, please” – Liverpool fans on who they want in the last 16

With Liverpool’s possible Champions League last 16 opponents confirmed on Wednesday night, supporters have been discussing their ideal fixture, with plenty of narratives possible.

Liverpool’s second-placed finish in Group A means they will face a side who won their group, with Real Madrid, Bayern Munich, Porto or Benfica their possible opponents.

The Reds have an interesting recent history with all of those clubs for various reasons.

Real Madrid, of course, are the side that beat Liverpool to the trophy last season, with the two sides also meeting in 2018 final.

Sadio Mane, one of the key players behind Jurgen Klopp‘s success at Liverpool, could be set for a reunion sooner than he would have expected, after leaving the club for Bayern Munich last summer.

While Portuguese outfits Porto and Benfica are the clubs from where the Reds made their two biggest signings this year, with Luis Diaz and Darwin Nunez arriving for big fees.

The question is, then, who would be Liverpool’s ideal opponents?

Liverpool now can’t face PSG in the next round. Good work, Benfica.

Due to limitations on who other teams can face (can't face opposition from their own country or teams from their qualification group) there's almost a 40% chance LFC could face Bayern next. https://t.co/hmYIlmGClK

Benfica or Porto on Monday, please.

Will Liverpool get Bayern or Benfica? Bound to be one of them #narrative

That’s errr quite some difference ?

Quite clearly getting Bayern though. The Mane reunion is so obvious. https://t.co/MKC928gCME

Nailed on we get Bayern in the round of 16. Mane coming back is a big storyline

We could meet Benfica or Porto pic.twitter.com/xJ0QlP7ZqC

Porto I wanna run to you https://t.co/hDp6NOvHJY

As mentioned above, the calculations suggest Bayern are the team Liverpool are most likely to meet in the next stage of the competition.

The Bundesliga champions are the only side to have won all six of their group matches in this season’s competition.

A potentially tricky last 16 meeting, but if Klopp’s side have aspirations to win this competition, they’ll need to go up against the best at some point!