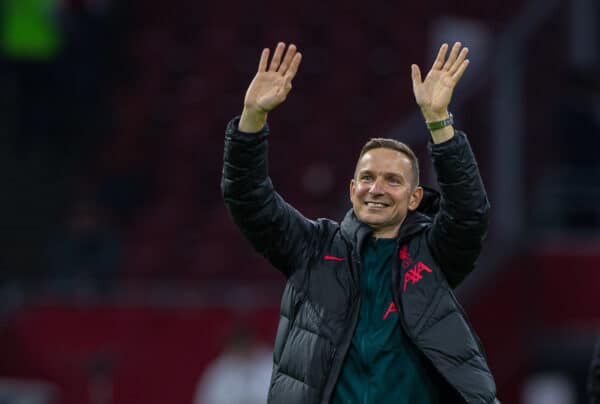 Pep Lijnders thanks Liverpool fans and vows to “pay them back”

Liverpool’s season has been turbulent so far, to say the least, and assistant manager Pep Lijnders has vowed “we will pay the fans back” for their unwavering support.

The Reds have already tasted defeat on five occasions this season, with another four ending in a draw – a far cry from the highs of being two victories away from a historic quadruple last season.

But Liverpool know they have to take the good with the bad, the players and the coaches are experienced enough to know it comes with the territory.

It is not to say it has not been draining for all involved but Lijnders was eager to commend supporters who have “stood behind us,” vowing all their support will be repaid.

“I want to give a big compliment to the fans, and to our owners, because it’s arrogant to think football always goes in your direction,” Lijnders told reporters on Tuesday.

“It’s arrogant to think that it always goes up, up and up. There will be difficult spells and difficult phases in the season for each club.

“A complement to the owners as well, this stability is really important, that is why Jurgen is here for seven plus years, why we signed a new deal.

“We knew, and we are not arrogant to think we will always be top, but we know that our players never stopped developing, fighting to find their form, our form – they have this commitment.

Lijnders’ words came after a discussion over Fenway Sports Group, following the news of the club being on the search for fresh investment, either as a minority or majority stake – hence the reference to the owners.

It was an interesting pre-match press conference ahead of Wednesday’s Carabao Cup meeting with Derby, and Lijnders’ message for fans certainly stood out for its conviction.

“I hope that fans realise the appreciation I have for this squad,” Lijnders later added.

“What I said, we will pay the fans back because they don’t stop believing, don’t stop shouting even when we lost a game.”