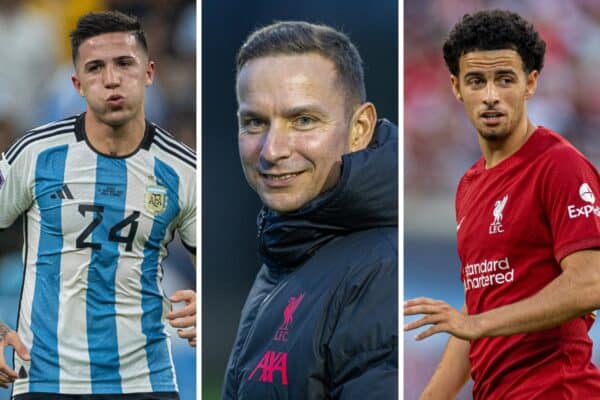 Good news for Gordon and Jones

With the Reds back in action on Thursday, we were able to get more of an inside word on how the squad is shaping up.

We already know Diogo Jota and Luis Diaz are not to be back until January has come and gone, and Pep Lijnders did tell reporters on Wednesday that “Diogo is inside the timeframe” still.

That’s as good as one can hope for.

As for Curtis Jones, who did not feature in the Dubai friendlies and was missing for the last two games before the break, he is “one week away from team training,” Lijnders confirmed.

Kaide Gordon, meanwhile, made an important step in Dubai as he “started running [for the] first time,” and the assistant manager was eager to say that “it’s great to see him on the pitch [and] just to tell him as well that we didn’t forget him.”

The 18-year-old has been sidelined since February due to various issues including a pelvic injury and with a number of young players rising to the fore, including Ben Doak, he’ll be desperate to get back on the pitch.

It will be some time before he’s considered for the squad but he’s making important steps forward.

Alisson, Trent Alexander-Arnold, Fabinho and Jordan Henderson are back from the World Cup, but involvement will only likely come off the bench at City, if at all.

The Reds’ return is just a day away!

Enzo Fernandez is the talk of the town, still

Other things you should know

This is brilliant. Simply brilliant. You cannot underestimate what this will mean to the kids and their families.

It was brilliant to return to @AlderHey this year, alongside @Everton, to spread festive cheer ?

It’s always a special day to surprise so many brave patients and their families ?? pic.twitter.com/8jNKAFnCEm

There is more Carabao Cup action this evening, Man United host Burnley in Sky Sports’ offering at 8pm, but Blackburn vs. Nottingham Forest may be one to watch should Tyler Morton feature.