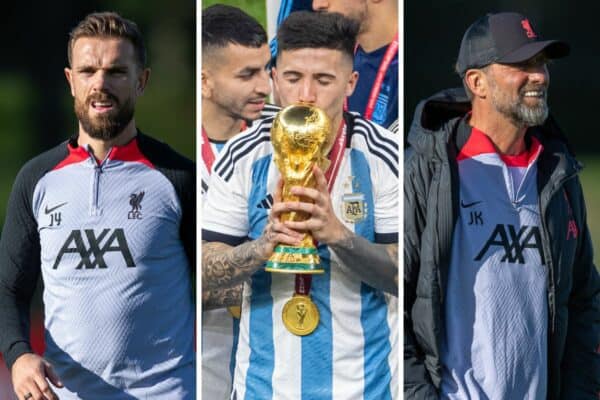 Another day, another report suggesting Enzo Fernandez could be Liverpool bound, with just two days to go until the Reds’ Carabao Cup clash against Man City.

Liverpool said to be Enzo’s “preference”

After a host of stories from Portugal and Argentina suggesting Liverpool had a “pre-agreement” in place to sign Fernandez last week, another encouraging report surfaced in Portugal on Tuesday.

According to O Jogo, who were a good source of news for Darwin Nunez‘s move to Anfield, and last week claimed Liverpool had made a “promise to match” any other offers for Fernandez, the 21-year-old has made a move to Liverpool his “priority.”

That, they say, is because the Reds have already struck an agreement with his agent, with many other clubs from Spain, England, Italy and France learning of Fernandez’s “preference” when making enquiries recently.

The report adds that Benfica have no interest in selling him in January, with his release clause set at €120 million.

This all comes after River al Instante, a River Plate news source, claimed Liverpool would offer £80 million for Fernandez in a deal that would see him remain at Benfica until June, with his former club River Plate to receive over £20 million of that figure.

As always, we’d urge you to take these reports with a pinch of salt for the time being, but links to the World Cup’s Young Player of the Tournament are certainly gathering pace.

2 days until the Reds are back for good

Our latest features & a testing quiz!

The Carabao Cup fourth round gets underway this evening, with Newcastle vs Bournemouth the pick of the four ties.

Tomorrow, Pep Lijnders will be on press conference duties ahead of Thursday’s trip to the Etihad.

Have a good evening, Reds!