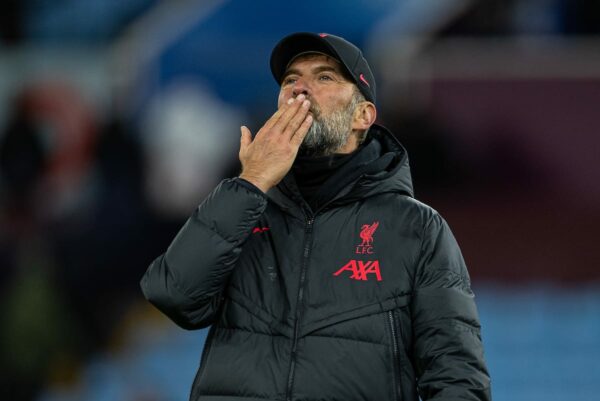 There were positives and, a few, negatives to emerge from Liverpool’s 3-1 win away to Aston Villa, as those watching on from the media assessed an important three points.

Jurgen Klopp‘s men were comfortably the better team on Boxing Day, playing some lovely football, particularly in the first half.

Goals from Mohamed Salah and Virgil van Dijk saw the Reds in complete control at half-time, and while Ollie Watkins pulled a goal back, youngster Stefan Bajcetic responded off the bench with his first goal.

Here’s how the media reacted to Liverpool’s win, as a festive treat was knocked up at Villa Park.

Goal‘s Neil Jones thinks the the Reds’ season is “coming to life”:

“This was exactly the Christmas present Jurgen Klopp and Liverpool wanted.

“Their Premier League season, belatedly, is coming to life, and Klopp was certainly smiling here as his side picked up a third successive league win with a hard-fought 3-1 win at Aston Villa.

“With Tottenham having dropped points at Brentford earlier in the day, Liverpool are now within five points of fourth place and have a game in hand too. After a slow start, the Red machine is beginning to find some sort of groove.”

The Guardian‘s Ben Fisher admitted that the Reds weren’t perfect, but was still impressed:

“This was not a vintage Liverpool performance by any stretch but there were glimmers of sparkle as they dispatched Aston Villa and put their foot back on the accelerator in pursuit of the top four.

“Klopp’s festive message to supporters touched on various themes, from his admiration for Love, Actually and the ‘crazy world we are living in at the moment’, to Liverpool’s Champions League final defeat in May – ‘Mr Courtois had a pretty good day’ – and, most pertinently, moving to ‘within punching distance’ of the top four.

“Within 37 entertaining minutes here, they had homed in on fourth-placed Tottenham, whom they are now only five points behind with a game in hand.”

This game was lively, sometimes so open it was silly and, occasionally, slapstick, a Wacky Races of sorts.

A number of Liverpool players were vital to the result…

Nathan Ridley of the Mirror was hugely impressed by Van Dijk’s performance:

“The debate will likely never end when it comes to where Virgil van Dijk stands in the history of Liverpool’s great defenders. But there should be doubt that in this Reds side, the Dutchman stands as without doubt the best.

“Having sat out Thursday’s loss in Manchester, Van Dijk’s omission was stark while watching Liverpool’s hapless defending – albeit against City’s awesome attack.

“It was no surprise, then, that the big man being back in action at Villa Park helped improve Klopp’s defence, although his manager perhaps didn’t anticipate his impact at the other hand.

“With half-time approaching, Van Dijk patiently waited to feed off scraps at a Reds corner and make it 2-0, via a slight but significant deflection off Ezri Konsa to beat Robin Olsen.”

Jolly had to focus on another record for the irrepressible Salah:

“In a meeting of monarchs, Liverpool’s Egyptian King now sits alongside King Kenny.

“For Mohamed Salah, a 172nd Liverpool goal means he has as many as the revered Kenny Dalglish, and in 238 fewer games.

“For Liverpool, Salah’s landmark strike was accompanied by an assist to show that, like Dalglish before him, he is far more than simply a finisher.”

Harry Poole of BBC Sport showed his support for the much-maligned Darwin Nunez:

“There may not have been a goal for Nunez to celebrate at Villa Park but the Uruguayan demonstrated flashes of the promise that convinced Liverpool to pay big money to sign him from Benfica in the summer.

“There is certainly no doubt that he should have added to his tally of nine goals in 20 games for Liverpool here – and on another occasion such misses could prove costly.

“The tenacious 23-year-old ended the match with the highest expected goals value of any player (1.15 xG) after landing four of his six shots on target – five of which were taken inside the penalty area.

“But his 12 touches inside the opposition box – also a match-leading figure – hinted at his broader influence and his unpredictable movements caused huge issues for the Villa defence throughout.”

This Is Anfield‘s Mark Delgado focused on Andy Robertson, who earned a record of his own:

“Andy Robertson needed just one assist to overtake Leighton Baines and become the defender with the most assists in Premier League history and duly achieved the feat at Villa Park, albeit not with a typical one.

“Whereas usually we might expect the Scot’s assists to be either set-pieces or wicked deliveries from the left flank, this was more Salah-esque: in off the right channel onto his left foot, a first-time, controlled touch across the six yard box – right into the feet of Mo himself.

Jones loved Bajcetic’s memorable goal, in what was a strong all-round cameo:

“Bajcetic had been on the field less than two minutes by the time Olsen pushed Darwin Nunez‘s cross into his path.

“Some would have shot first time, others would not even have been bold enough to venture that far forwards, but Bajcetic is a bit special, and his composure was off the scale as he chopped the ball away from the sprawling Olsen and, on his weaker foot, slipped the ball past Tyrone Mings and into the unguarded net.

“A first professional goal for the 18-year-old, who has made huge strides forward this season. We’ll be hearing an awful lot more about him in the coming months and years.”

The Reds do still look flawed at times, though…

Delgado admits certain issues need to be ironed out:

“The three points are more than welcome but Liverpool remain a work in progress when it comes to salvaging the campaign, make no mistake of that.

“It’s fair to say that the Reds are a bit of two teams right now: very good going forward and decent enough to trouble any team, but still wide open defensively and yet to rediscover the relentless consistency off the ball which was, for years, a hallmark of the side.

“Either side of Fabinho remains wide open, too often.

“Behind and inside of the full-backs remains an area teams target and have great joy with, both in direct balls from deep and quick exchanges from within the final third.

“There are the areas Klopp and co must still keep working on, if we’re to return to peak, elite Liverpool FC.”

Writing on Twitter, David Lynch rightly stated that Liverpool are still to easy to create against:

Not entirely sure what to make of Liverpool today. On paper that's a big win but if they continue to surrender control of games this side of the World Cup then they will lose as many as they win. Worrying that Nunez's momentum appears to have been torpedoed by the break, too.