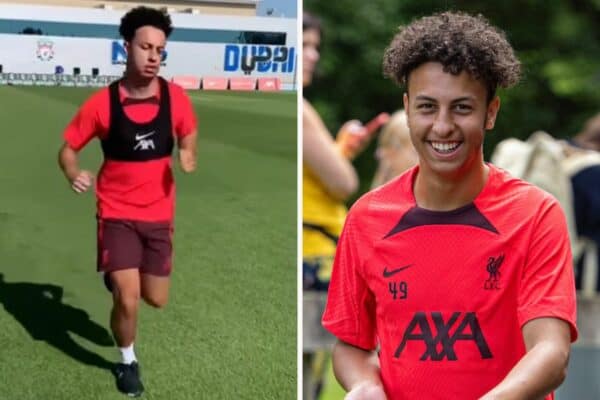 Kaide Gordon back on the pitch after 10-month injury nightmare

After around 10 months on the sidelines, Liverpool youngster Kaide Gordon looks to have returned to light training during the Reds’ mid-season camp in Dubai.

The 18-year-old enjoyed a breakthrough season with the first team in 2021/22, making four appearances, including three starts in Carabao Cup and FA Cup matches, and becoming the club’s second-youngest-ever goalscorer.

However, a long-term pelvic injury has brought a halt to his progress, with the young winger sidelined since February.

Gordon is part of the 32-man Liverpool squad that is currently away in Dubai, and was pictured in attendance at the friendly against Lyon on Sunday.

He’s not yet ready to return to full training, but Gordon’s latest post on Instagram shows him jogging around the pitches at Liverpool’s base in the UAE.

That is a step academy director Alex Inglethorpe revealed would be on the cards earlier this month, adding that returning to action on the grass “is always a good sign for any player.”

For now it remains unclear when the youngster will be ready to partake in full training, with the next step in his recovery likely to be individual ball work.

It’s easy to forget the promise Gordon showed upon his introduction to the senior team last year, with a number of the club’s first-team players taking him under their wing over the course of last season.

A right-sided attacking player with a good left foot and an eye for goal, Gordon didn’t look at all out of place in the matches he played at senior level.

During his time on the sidelines, another promising right-winger has emerged from the academy, with Ben Doak, who arrived from Celtic last summer, the standout player in the younger age groups this season, and also part of the squad in Dubai.

In the new year, Gordon will be hoping to carry on where he left off with his promising development, after a forgettable 2022.