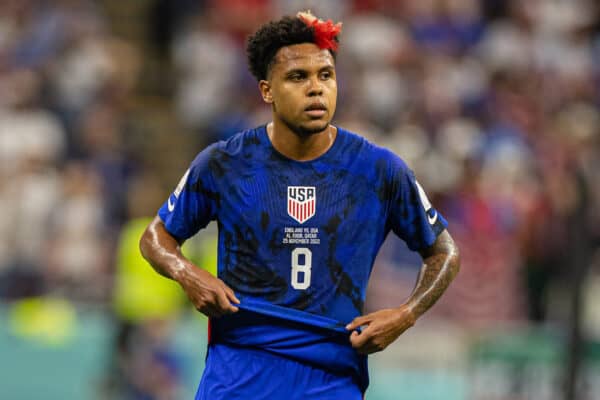 Why Liverpool and Weston McKennie transfer rumours should be ignored

With less than a fortnight until the January transfer window, Liverpool have been linked with a loan move for Juventus midfielder Weston McKennie.

Signings, sales and loans will be permitted again in the Premier League from January 1, and there is an understandable clamour for new faces at Anfield.

This is particularly the case following serious injuries to Luis Diaz and Diogo Jota, while it is a long-held belief that Jurgen Klopp‘s squad is at least one midfielder short.

It seems more likely that a new addition is made in the middle of the park next month, with the likes of Sofyan Amrabat and Moises Caicedo linked.

A new name touted with a move to Merseyside is Juventus and United States midfielder McKennie, with suggestions he could leave Turin on loan.

The Mail have claimed that while the “priority is to sign Jude Bellingham from Borussia Dortmund in the summer,” Liverpool “remain open to loan deals” mid-season.

McKennie is named as a possible target, but a temporary transfer for the 24-year-old is, in a word, impossible.

Liverpool have struck one loan agreement with Juventus already this season, with Brazilian midfielder Arthur arriving on deadline day in September.

And in the Premier League handbook, rule V.7.5. states: “In no circumstances shall more than one [temporary transfer] be from the same transferor club at any one time.”

With Arthur already on the books at Anfield, there is no way for Liverpool to loan both him and McKennie at the same time.

The only way to do so would be to make Arthur‘s stay permanent, which is highly unlikely given the 26-year-old has played just 13 minutes so far due to injury.

There is no option to cut the deal short, either, with the player’s agent explaining as much last week while providing a positive update on his recovery.

“[He will] stay 100 percent at Liverpool in January,” Federico Pastorello told TuttomercatoWeb.

“It’s an aspect that has never been under discussion, I don’t know who questioned the rumours about his possible return to Turin, but that’s not the case.”

It is, therefore, a simple situation for Liverpool: a loan move for McKennie is off the table, and was almost certainly never under consideration.

This serves as a healthy reminder that, beyond Merseyside reporter Dominic King, the Mail is far from the most reliable source when it comes to transfer rumours.

Often, they are blindly lifted from other publications with little research or credit.