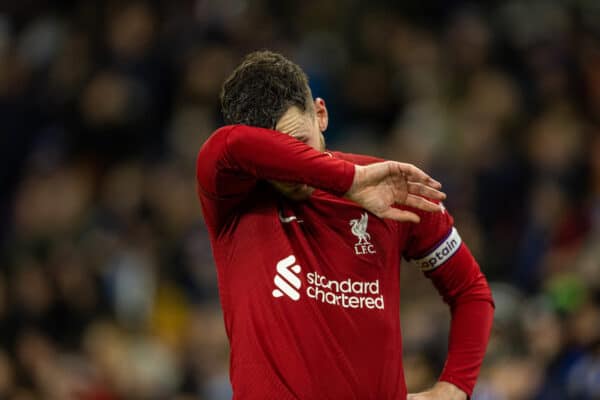 Brighton 3-0 Liverpool: Player Ratings – What the media and statistics say

Nobody came away from Liverpool’s dire 3-0 defeat at Brighton with their reputation intact, as every individual produced an awful showing.

The Reds needed a response after a string of disappointing performances, but they were woeful in the first half, finding themselves lucky not to be behind.

Brighton were soon ahead after the restart, as Solly March poked home after an error by Joel Matip, and the midfielder then doubled the hosts’ advantage.

From then on, Liverpool remained lifeless and Danny Welbeck made it 3-0 late on, in what was arguably the most concerning, and yet predictable, result of the season.

This wasn’t a day to focus on anything positive, on what was a treacherous afternoon on the south coast.

It was a dreadful afternoon for Matip (3.5), who got the lowest average after one of his worst showings for Liverpool.

The centre-back was awful for March’s first goal and was walked past too often, looking like one of many players past his best.

The Echo‘s Ian Doyle gave Matip just a three-out-of-10 rating, saying he was “all over the place” and “terrible” for the opener.

The 31-year-old played just one accurate long ball out of five attempted, according to FotMob, summing up Liverpool’s wastefulness.

The second-worst player was Jordan Henderson (3.9), who once again looked all at sea both on and off the ball.

In our TIA ratings, we admitted that we “lost count of the number of ‘trademark’ hoofed balls over the top” that the captain made.

Fabinho (4.4) was considered Liverpool’s third-worst performer, but Doyle stuck up for the Brazilian, admitting that he “wasn’t helped” by his teammates.

In terms of the best player, which is clutching at straws, to say the least, Ibrahima Konate (5.7) got the best overall rating.

Next up for Liverpool is Tuesday’s FA Cup third round replay away to Wolves (7.45pm UK), which should be fun!