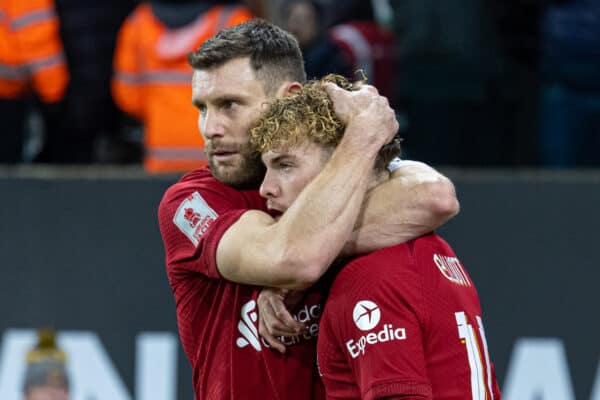 While not always an attractive and flowing performance, the FA Cup victory at Wolves marked a welcome return of a stubborn determination to Jurgen Klopp’s Liverpool that was a joy to watch, writes Steven Scragg.

Beggars can’t be choosers, and if this was a performance that was lodged midway through a 20-game unbeaten run we’d probably have been vaguely unimpressed with it.

On the crest of a wave of dysfunction, however, this felt like a step in the right direction.

A win, a clean sheet, and a place in the next round of the FA Cup, all obtained against opponents that couldn’t quite summon up a replica of their endeavour from the original game.

This was an evening that offered a lot of plus points.

Approve or disapprove of us still having a 37-year-old knocking around our squad, James Milner brought a much-needed edge to our play, operating as a mood changer for a team that has been bereft of leadership far too often this season – a situation that has only escalated since the return of club football beyond the World Cup.

It was Milner who led the way in trying to conjure up some vital confidence ahead of the Premier League visit of Chelsea on Saturday, but he wasn’t alone in his efforts.

Stefan Bajcetic impressed in midfield yet again, Naby Keita showed a pleasing yet frustrating example of the player he could have been for us, while further forward Harvey Elliott was a ball of energy on a night when Cody Gakpo looked a little more comfortable in his new surroundings.

Elliott, infused as he was by scoring what proved to be a majestic winning goal, dropped deeper whenever required, in tandem with Fabio Carvalho, often making what was, at times, five across the midfield.

Thanks to the greater support in central areas, Thiago seemed like a man energised by the younger legs that surrounded him.

At the back, Caoimhin Kelleher peddled his magnificently unruffled approach to goalkeeping, and there was some intense central defensive responsibility undertaken by Ibrahima Konate and Joe Gomez.

Added to the example set by Milner, Kostas Tsimikas took a glance to his right and thought, ‘I’m having a bit of that too’, indulging in pressing when pressing was required and weighing into challenges with controlled brutality that warmed the wounded soul.

A quintet of substitutions from the 66th minute onward did little to disrupt the pattern of Liverpool’s night, and aside from a late flurry of effort by the home team, we never truly looked likely to fumble our place in the next round.

These five interlopers made contributions of varying effect, and it would have been the perfect overall performance had Curtis Jones sneaked that late chance for a second Liverpool goal.

Test of loyalty ahead

Along with Paul Ince’s bizarre insistence on constantly referring to Danny Murphy as ‘Danny Murphy’, and on to the momentary blackout of the floodlights that marvellously curtailed Wolves‘ first attack, it all made for a high degree of comedy that rival broadcasters will be hard pushed to match.

It at least partially made up for not being able to make use of the ticket I had for the game.

Now presented with the prize of a return to the Amex, Liverpool will go to Brighton with a point to prove to both themselves and the team that tormented them so emphatically over the weekend.

To progress to the fifth round, Klopp’s side will need to buck Liverpool’s historical trend of general ineptitude when attempting to retain the trophy, only once having made it beyond the fourth round when cast in the role of the holders on the previous six occasions we’ve won the competition.

Before any of that, Klopp has a lot of thinking to do ahead of the crucial visit of Chelsea, on whether to prevail with Keita and how much longer he keeps Bajcetic out of the team for the bigger games, when a more experienced midfield trio have offered only a festering staleness recently.

If the Liverpool manager is going to stubbornly hold to his tried and trusted 4-3-3 formation, then fresh legs and greater energy will be key, as will be the added support of the front three dropping back when needs must.

Having just denied that he is too loyal to his players, Klopp is now presented with the perfect opportunity to prove this theory.

Based on the recent form of many of those to have sat out the trip to Wolves, and the efforts of those who stepped so excellently into their places on Tuesday night, there are some players who should be sweating profusely on their inclusion against Chelsea, and others who should dare to hope to retain their place in Klopp’s lineup at Anfield.