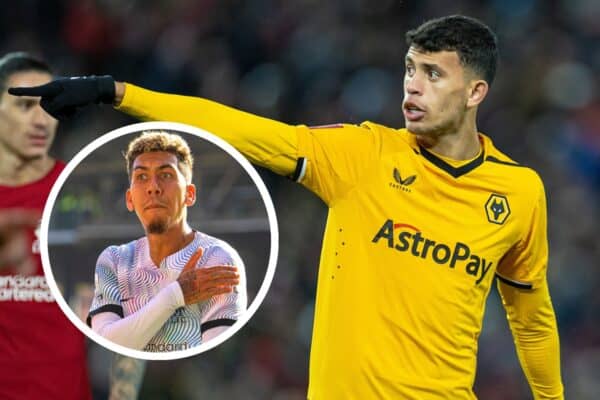 While Liverpool’s expected signing of Matheus Nunes has not captured the imagination for some fans, there is a clear reason why he is being targeted.

Though a deal is not close to completion yet, according to reports, Liverpool are believed to be lining up a move for Wolves midfielder Nunes this summer.

That would come only a year after the player swapped Sporting CP for Wolves, with the Reds said to have held an interest at the time only to commit to renewing their pursuit in 2023.

With supporters clamouring for a game-changing addition in January, it should perhaps come as no surprise that news of a delayed deal for Nunes has not been met with overriding positivity.

But the 24-year-old gave a glimpse of what he can offer with his cameo in the 2-2 draw between Liverpool and Wolves in the FA Cup.

And now, a graphic produced by StatsBomb shows Nunes to be among the most frequent counter-pressing players across Europe’s top five leagues:

Which players make the most counterpressures in the Big 5 Leagues? pic.twitter.com/TehVkNiDsF

The foundation of Jurgen Klopp‘s success, counter-pressing is described as “a pressure exerted within five seconds of a turnover.”

In layman’s terms, that is an attempt to win the ball back within five seconds of possession being lost.

This season, Nunes is among the most frequent counter-pressers in Europe, averaging around 4.5 attempts per 90 minutes, which is similar to two other midfielders linked with Liverpool, Sofyan Amrabat and Kouadio Kone.

He is successful with just over 0.2 of those per 90, which does, however, show room for improvement when compared to Hoffenheim’s Dennis Geiger.

Most interesting, though, is how Nunes stacks up to the only Liverpool player visible on the chart: Roberto Firmino.

While Firmino attempts more counter-pressures per 90 at a higher rate of success, Nunes is not far off the No. 9 for either.

That may be explained as a signal of Firmino’s decline with age, but it should be stressed that only seven players across Europe’s top five leagues attempt more counter-pressures than the Brazilian.

Now, Nunes would not be arriving to replace Firmino, given they play in very different positions, but this underlying data does show what the Wolves man could offer.

“It’s actually a midfield player to stop the opposition from coming right through them.”