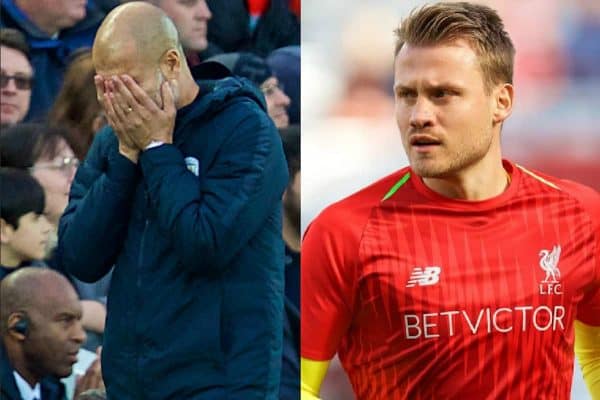 We round up the latest Liverpool news and transfer rumours on Thursday, as the return of wall-to-wall domestic action edges nearer.

There is no denying that Pep Guardiola is a great manager, turning Man City into one of the most dominant outfits in Premier League history.

It is also clear that Liverpool have got into his head, as highlighted by his lecture for the University of Liverpool on Wednesday night.

“I love reading but I don’t read. I start to read and then I think Liverpool, Klopp and I can’t focus,” said Guardiola.

“People say I read books. I don’t read books. I have a nice library and sooner or later I will read them but I don’t have the time.”

City have been ruffled by Liverpool since the beginning of the year, with the Reds ending their unbeaten league run before knocking them out of the Champions League.

It is the ultimate compliment to Jurgen Klopp‘s side that the Spaniard considers them such a threat.

Simon Mignolet‘s agent Nico Vaesen says it is doubtful his client will leave Liverpool in January, with an exit unlikely to benefit all parties.

“We have to be realistic,” Vaesen told ESPN.

“There are not many good possible transfers in January, especially not for a goalkeeper.

“Circumstances have to be right for everybody. If something is to happen in January, it will be very difficult to do something. If Simon goes or could go in January, Liverpool have to look for a replacement as well.

“So I understand from a club’s point of view that it’s not easy to do. In that respect, we know each other’s problems. We’ll see how and when we can solve them.”

It would be a surprise if Mignolet was allowed to leave, considering Loris Karius is on loan at Besiktas and youngsters Kamil Grabara and Caoimhin Kelleher are not yet ready for first-team football.

No, not that Llorente!

According to Cadena Ser, Liverpool are eyeing up the signing of Real Sociedad centre-back Diego Llorente in January.

The 25-year-old is also attracting interest from Tottenham and Newcastle, with Spurs keen to plan for long-term life without Toby Alderweireld and Jan Vertonghen and Rafa Benitez looking to bolster his defensive options.

Llorente has a £28 million release clause in his contract and has impressed for Sociedad this season, as well as featuring in Spain’s 1-0 win over Bosnia at the weekend.

Does Klopp really need to splash out on another centre-back, though, considering the form of Virgil van Dijk and Joe Gomez?

Liverpool are at home to Portsmouth in the third round of the FA Youth Cup, following the south coast side’s 4-0 victory at Cray Wanderers on Wednesday.

The tie must be played by December 15, but no date or venue has been set as of Thursday.

The Reds’ last FA Youth Cup triumph came in 2007—their third success in the competition, following wins in 1996 and 2006.

The club is continuing to engagement with local residents, with further “drop-in sessions” for early next year announced on Thursday.

Over 250 residents have already come to Anfield to voice their views, mainly regarding stadium plans, whether it be building work or the hosting of major concerts and other sporting events.

Here are the dates and times for the next drop-in sessions:

*Please note that the drop-in sessions at Bob Paisley Court are for those residents only.