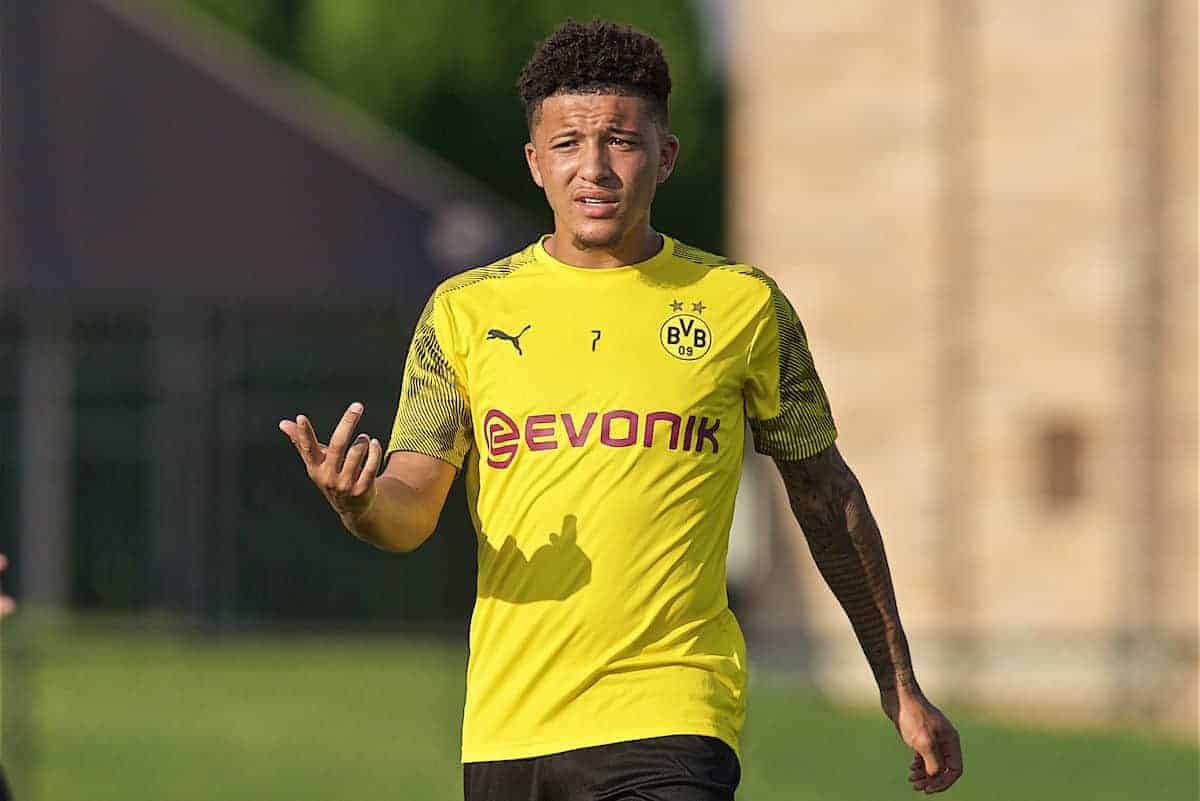 Borussia Dortmund’s sporting director has conceded Jadon Sancho will leave the Bundesliga side in the future, with Liverpool among those likely to be interested.

Sancho joined Dortmund from Man City in 2017, with his decision to leave for Germany widely lauded as ground-breaking in terms of young English talents.

The 19-year-old has established himself as a key player at the Westfalenstadion, scoring 18 goals and laying on a further 29 in 64 appearances, including three goals and five assists in six league games this season.

He is now also an eight-cap England international, and netted twice and teed up another in the 5-3 victory over Kosovo in the September international break.

Already a bona fide star, Sancho’s potential is immense, and though his switch to Dortmund has played a key role in making his name, it is almost universally considered a stepping stone.

That is a notion supported by the club’s sporting director, Michael Zorc, who has admitted his time with BVB is limited.

“No decision has been made, but you don’t have to be a prophet to know he won’t play here for another five years,” he said.

“He has taken this positive development [at Dortmund]. I doubt that would have been possible with top English clubs.

“We trust the players very early, and we are not afraid to let them play. He acknowledges that.”

These comments are not earth-shattering, with Zorc merely accepting Dortmund’s standing over many years, along with Sancho’s ability and ambition.

Jurgen Klopp‘s former club have made their name by regularly profiting from their top talents, including the sales of Henrikh Mkhitaryan, Ousmane Dembele, Pierre-Emerick Aubameyang and Christian Pulisic in recent years.

Their shrewdness in replacing these players has allowed them to compete with Bayern Munich at the top of the Bundesliga, though this campaign they have begun poorly, sitting eighth after six games.

Meanwhile, Liverpool’s reputation among Europe’s elite has shifted since Klopp’s arrival in 2015—following his seven-year spell with Dortmund—and now they are able to compete with the top clubs in the transfer market.

Klopp confirmed in February that the Reds had considered a move for Sancho prior to his exit from City in 2017, but explained they “would never have a chance” as “English clubs don’t sell them to other English clubs.”

Now, however, if Sancho were to leave Dortmund in the near future, Liverpool could be in a position to sign a player Klopp described in July as “one of the biggest talents in world football.”

“There is no doubt about the potential of Jadon Sancho,” the manager said during pre-season.

“His speed and body control at the highest speed is his main strength.

“Being good in big spaces and in small spaces makes you a pretty interesting player—and that’s what Jadon is.”

Liverpool are currently well-stocked in attack with Sadio Mane and Mohamed Salah flanking Roberto Firmino, but given Sancho’s age he could be earmarked as a long-term successor out wide.

Klopp’s connections with Dortmund could aid negotiations, as could the club’s potential new kit deal with Nike, who sponsor the winger.

The terms of Liverpool’s proposed agreement are heavily based on merchandise sales, which could encourage the signing of high-profile players such as Sancho, who is a close friend of Rhian Brewster.

It remains hypothetical at this stage, but the prospect of the Under-17 World Cup winners lining up alongside each other at Anfield is an exciting one.