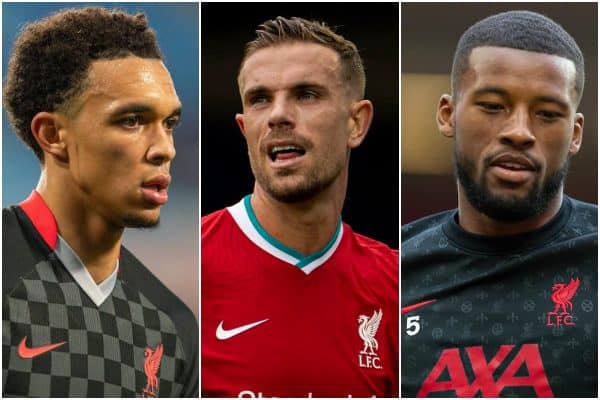 Liverpool could yet get fans back inside Anfield in 2020 and our new training centre is looking tremendous in Tuesday’s news updates.

The Department of Culture, Media and Sport have “submitted proposals” which could see fans return to Premier League games as soon as next month, reports the Mail.

Plans to get fans back into stadiums are being pushed forward after the decision to allow spectators to arts and indoor arenas, but not outdoor elite-level football fixtures, was widely criticised.

The plan is currently to see fans allowed to return once the national lockdown is lifted at the start of December – assuming that timeline remains.

Fans in Tier 1 and 2 areas of the country would be allowed to go to games under certain conditions, which would be a huge boost to the finances of clubs.

March was the last time any supporters were allowed into Anfield for a game and until now there wasn’t much prospect of any returning until the new year.

Henderson back with Reds

We’ve had plenty of negatives this international break, with Salah getting Covid, Gomez taking a long-term injury and other knocks and pains along the way.

Jordan Henderson was in the latter group, taken off at half-time in England’s game with “muscle tightness” and he’s now on his way back to Liverpool early – but there’s optimism over getting him back into the line-up in time for the weekend.

There’s also a similar update on Andy Robertson, who sat out Scotland’s weekend game, while other injury concerns remain over Fabinho and Thiago, neither of whom have been on international duty.

Henderson’s extra early return is a welcome one, then, as the Reds will have a somewhat patchwork side in place against Leicester.

An entire game called off this time! Switzerland vs Ukraine has been cancelled and the whole away squad placed into quarantine.

Three players so far are positive and they expect more to return positives after the next round of tests. Uefa “haven’t decided” what course of action to take because obviously there’s no planning or precedence for this utterly unexpected and unforeseeable turn of events!

A guided tour from Ox!

Spain vs Germany if you want some Nations League. Spain need a win to top the group.