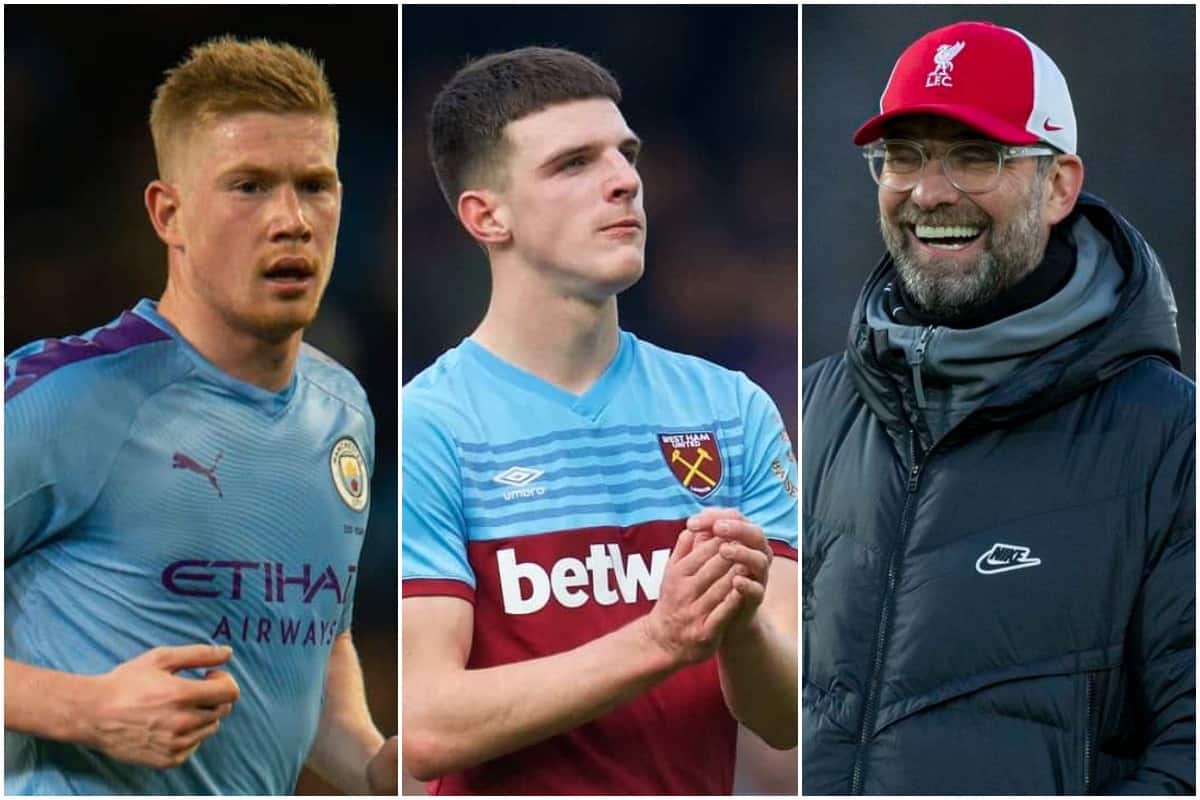 Small children woke up on Friday morning having known, for the first time in their lives, what it was like for Liverpool to lose a home league game. Weird.

Transfer news, is it?! An intriguing rumour, although an improbable one given reports over the past year.

Declan Rice has been excellent for West Ham this season, but he has also been long linked with a move to Chelsea.

90 Mins claim inside info from the England international’s family and close ties suggest that City, the Reds and United all want him in summer – as the Hammers will be forced to sell for a cut-price fee of £50m, having previously valued Rice at £80m.

That’s a huge discount, and of course it’s the ‘rona pandemic, no fans and all the rest of it which is supposedly forcing West Ham‘s hand.

Chelsea want him in defence, we want him for midfield. Fabinho staying at the back if so, you’d imagine.

Quite honestly, we have to go with Klopp’s assessment at this stage: forget the title, focus on the next game. The next goal, even.

But the matches keep coming anyway and two upcoming league clashes are pretty huge, whatever the ambitions which remain are.

After United in the Cup this weekend, we face Spurs, West Ham and Brighton, then Man City and Leicester – the latter two are second and third, so we’re playing catch-up and they will be must-win games, if we have any kind of form by then again.

Big news, then, comes from both clubs as they have a key man out for several games each: Kevin de Bruyne is out for four to six weeks and Jamie Vardy will miss two to three weeks.

The Reds play City in 16 days; the Foxes in 22 days, so the latter will be right on the verge of his comeback.

The buck always stops with the boss

At any football club, whatever the objectives, when they’re not being met it’s always the manager who faces the questions…and has to come up with the answers. Good job we’ve got a great one, then, in Jurgen – time for him to work some magic.

Frank Lampard no longer has the option of saying “I don’t read the headlines” after losing his head completely about some perceived negative articles about his team…who have won three of the last 10.

You’ll Never Walk Alone is more important than ever right now. No good comes from feeling sorry for ourselves and excuses won’t help. It’s on us, all of us,to fight our way back.We’re at our strongest when we are one force- players & supporters, TOGETHER ?#UnityIsStrength #YNWA pic.twitter.com/IKWurvZSFL

A very good Neco Williams interview about dealing with online abuse, learning from Trent and more, from The Independent‘s Tom Kershaw.

If you’ve forgotten what scoring goals looks like, ‘Gladbach vs Dortmund should provide a reminder. BT Sport, Bundesliga, 7:30pm.