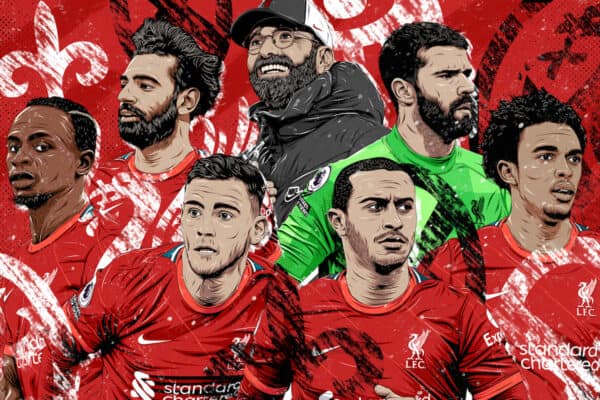 The eve of a new season. The start of a new campaign. The moment Jurgen Klopp and his gang of fit-again Reds have been building toward. Let’s go and win it again, it’ll apparently upset loads of people.

Predictions are little more than guesses, however well-informed and well-intentioned.

We’ve all done variations of predicting a top scorer who ends up with three, predicting a relegated team who sneak into Europe and predicting it’ll only take us 20 minutes to get ready and meet a mate before turning up an hour-and-a-half late to frosty glares and cold nachos.

Nine predictions here, none with the Reds winning, plus another one here.

One out of six here says Liverpool for the title.

And yes, 20 predictions for the title, none with the Liverpool being crowned, and another deciding Klopp’s squad are not even top-four calibre.

Are we missing something, or are they?

The start of a new campaign is always littered with different variations of the same thing: insane over-optimism, absurd and misplaced fury and the certainty that watching your own side makes you know what the other 19 are doing.

And picking what is about to happen based on what happened last time you remember watching games.

Liverpool, for the first time in four years really, were not part of the end-of-season storylines.

Sure, the Reds claimed a top-four spot on the final day, but it didn’t really matter to anyone outside those of a Red persuasion: it was more about Leicester imploding again, and the battle of England’s finest on a continental stage as City and Chelsea‘s petrodollars went to work in the Champions League final.

Sorry if you don’t want to hear that, but an end-of-season run of form is irrelevant in the greater picture of football’s incessantly moving headline acts.

It has its positives, though. It leaves the team overlooked. Fourth is somehow more evocative and talkaboutable than third; it’s ‘snatching the final spot’ or ‘squeezing into the Champions League‘. Third is merely not runners-up, not champions.

Transfers are the same: getting smart and good-value business done is great, but if you do it too early, you’re out of sight, out of mind.

Ibrahima Konate was confirmed on May 28; a whole lot of rumour-mongering and cheque-writing has been done since then, with Spurs, United, City and Chelsea the main protagonists on these shores.

About those 20, then. BBC Sport’s ‘pundits’ and ‘experts’ range from the insightful and excellent to the downright offensive and obnoxious.

Their likeability doesn’t really have anything to do with making them more or less probable to correctly guess the season’s outcomes, though.

All 20 went for either City or Chelsea to win, and it’s not as though accusations of biasedness or idiocy can be levelled at them for those picks. They are astonishingly good squads, with elite managers at the helm.

But so too do Liverpool fall into that category, however easy it is to overlook them.

Could we do with another forward? Sure. A Gini replacement? Maybe so. But it’s the same everywhere, one way or another.

City don’t have an Aguero replacement (yet). Chelsea have only three central midfielders, unless returning loanees are taking up the mantle. Late deals will be done, or not, and world-class coaches will cope anyway.

And amid all the guesswork, those coaches are readying squads of 20 and 25 and 30 to simply get to work quickly, play the way they play and start smashing the opposition aside.

Fans are back, a huge positive for the most part, amid a wider return to footballing normality by way of the more regular schedule and pre-season buildup.

Remember what happens in a normal season? Liverpool wallop basically every team. There are never guarantees, but every reason to be expectant.

There isn’t a side which has the concentration, ferocity and organisation in the attacking half of the pitch which this Klopp team at its best possesses – and that’s off the ball. On it, they can be relentless lightning.

We’re going to see many returns to the status quo this year, whether that’s a good thing or bad is for each person to decide.

Late Liverpool winners? Bet on it. A runaway group at the top? We’ll be part of it. Sadio Mane in outrageous form? Nearly every week.

It’s so easy to forget how bizarre and idiotic the entirety of 2020 and the first half of 2021 was. Did you not find it weird working from home or travelling to your must-go-to job without the usual crowds?

Football had its changes and challenges too, and the players were not immune to the sterility of it, the upheaval, the late rearrangements and the being forced to sit out. Or to having to play centre-back.

It might take a while to establish a regular partnership at the back and have everybody in peak condition, but when they are, that area of the pitch is better than it was when the Reds were champions of everything.

Not to go on about last season too much, but despite the absence of anything resembling a defence, third place did concede fewer than second in 2020/21. But we’re predicted to go backwards somehow?

Liverpool under Klopp have spent years upsetting people, rewriting records, making claims to fame and bringing home silverware – even while others outspend the Reds.

If the Premier League is returning to normal this year, then this is what should be on the agenda. There’s little wrong with quiet confidence amid all the noise to be brashest and boldest.