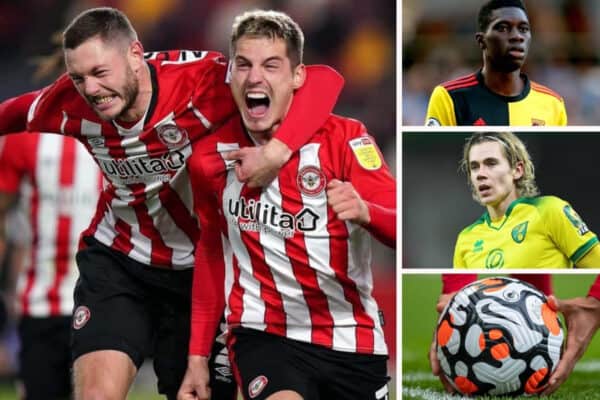 There are three newly promoted Premier League sides looking to avoid a return to the Championship this season, but how confident are they of beating the drop?

It’s now just a matter of days until the new season gets started, with Liverpool’s win over Crystal Palace back in May a distant memory.

While the Premier League has waved goodbye to Sheffield United, West Brom and Fulham, three promoted sides have come in in their place.

Norwich and Watford will both be hoping to last longer in the top flight than they did last time around, while Brentford are playing in the competition for the first time in their history.

A fight to stay up. We’ve been relegated far too many times over the years, going down with a whimper, but I don’t think that will be the case this time around.

If we can get the right players in then I have faith that Daniel Farke will be able to lead us to safety, so anywhere in the two or three positions above the drop zone would be a success.

How can Liverpool fans expect you to set up on opening day?

There is a feeling that we will be more defensive than we were in our previous top-flight season, so I’m expecting a 3-4-2-1 formation at times against the better sides and to play on the counter-attack – something we never did last time out.

On August 14, I could see Norwich lining up with that base formation, allowing the full-backs to push on with the midfielders providing a screen for three central defenders to cover counters.

An expectation from the fans for the club to make an actual fist of the Premier League this time.

If all goes to plan you should be expecting a completely different Norwich to the one you saw two years ago; robust, competitive, ambitious and not naive, weak and easy to play against.

Try the sausage rolls in the concourse.

In all seriousness, the biggest thing – literally – to look out for is the giant rotating big screen situated next to the away section.

It will have a pre-game show, replays of incidents during the game and the score/time/bookings/substitutions if you need to see any of that information.

Just look up to your right and it will be there!

Our ownership model. Whilst Delia Smith and Michael Wynn-Jones are pillars of the community and lovely people by all accounts, their lack of resources holds us back at the top level.

It would be great if we could find owners who share their values as people but also have the funds required to take us to the next step as a club.

I covered Liverpool throughout last season and felt they were unlucky for the most part.

Jurgen Klopp made some mistakes, of course, but the criticism he received at times was completely unwarranted and finishing in the top four was a great achievement in the end.

Ibrahima Konate is a terrific signing with his strength, athleticism and pace making him the perfect partner to form a solid defensive unit alongside Virgil van Dijk.

If Klopp has the majority of his squad fit for the entire season, I think Liverpool will win a trophy, whether that’s an FA Cup, Champions League or Premier League.

Watford supporters are pragmatic enough to realise that this season is all about survival for the Hornets and it’s a target likely to be mirrored by the staff and players.

Anything above 17th would be a triumph – I’d snatch your hand off for that before a ball is kicked.

Whatever happens, it’s going to be tough and we’re ready for a rocky road.

The one constant at Watford is that nothing stays the same.

Whether it’s the head coach or playing staff, you can always be guaranteed a slate of fresh faces and this year is no different.

Xisco replaced Vladimir Ivic last Christmas and brought with him renewed momentum and swagger. He’ll be hoping he can carry some of that newfound belief into the new season.

The playing staff has been supplemented with a few new names, with fans particularly keen to see what forward Cucho Hernandez can do.

Eyes will also be on more familiar faces such as Ismaila Sarr – whether he can perform regularly on the biggest stage will be a key question.

Of course, you may well need to know about a new head coach by the time the Reds roll into town, but we’ll cross that bridge when we come to it!

If you want a pint or something to eat, do it before you get into the ground.

If you’re travelling by train you’ll pass through the town on your way to Vicarage Road and there are plenty of decent places for a beer and a bite.

Once you’re inside the stadium your options are severely limited.

Some stability when it comes to the head coach wouldn’t go amiss, even if it’s just to stop the cheap quips from opposition fans and the less enlightened members of the press.

On a more serious note, an extended stay for a head coach would by definition mean a successful run of results, which this season more than ever would be incredibly welcome.

Apart from that, it’s hard to complain too much about being a Hornet.

For the size of club we are, from the size of town we’re based in, we have an incredible amount of fun – it’s hard to be anything other than proud and excited for whatever happens next.

Liverpool should be one of three teams fighting for the title alongside Man City and Chelsea.

The return of Van Dijk will almost feel like a new signing and after surrendering the crown last term, I’m sure there will be a steely determination to make a decent fist of the title race this time around.

It’s impossible to imagine it will be anything less than another exciting season for Liverpool supporters.

I am super optimistic about Brentford’s season but will be approaching it with a touch of trepidation.

This is Brentford’s first season in the Premier League and, unlike the Championship and League One which we know really well, we are entering unchartered territory.

I have no barometer to compare us against.

I’d like to think we can do OK but we won’t really know until we get out there. So roll on the start of the season.

I’m going to give us a cliched ‘optimistic fan’s first season in the Premier League‘ 17th-placed finish, but we have absolutely nothing to lose as so many people have written us off already.

We’ll be playing our first full season with fans in our new stadium.

I’m gutted that I wasn’t able to say goodbye to Griffin Park due to the pandemic curtailing our season – I was a tad nervous that our new-build stadium would not have the same atmosphere as its terraced old sister.

I was lucky enough to attend a couple of games in the stadium last season, however, and the atmosphere in the playoff semi-final against Bournemouth was on another level.

He looks ready to fill the hole left by Said Benrahma’s departure to West Ham a year ago and shows exactly how far we have come as only a few years ago we would be signing such a player from Leyton Orient!

Enjoy yourself when you come down. Most visiting supporters used to love visiting Brentford because it was good craic.

There are loads of pubs to go to pre-match. Not just the ones a few minutes walk of the stadium.

On Beesotted.com we always do a pre-match fans’ pub guide as part of our preview a day or two before the match in which will give a load of pubs to visit in the Brentford, Kew, Ealing and Chiswick area.

The atmosphere in and around Brentford is great on matchday. It’s friendly. There is no segregation and we use the word #manners.

Come to the pub and have a drink, have respect and that respect will be replicated. Go to the game. Enjoy. Go back to the pub win, lose or draw. Have another drink and you’re all good.

There was a big hoo-ha about the multi-coloured seats in our new stadium, with many fans hoping that we would keep with the traditional red and white.

That bothers me less now as I’m getting used to it.

I’m a bit gutted that we didn’t take the plunge with our new stadium and install rail-seating at least in one stand, though.

I completely understand the sensitivities around standing, however, and we must never forget those 97 Liverpool fans who went to that game 32 years ago and what their families have had to go through.

And fair play to Liverpool who have installed 8,000 rail seats. That’s more seats than in the whole of our West Stand standing section.

I am convinced that standing will be back at English stadiums within the next few years, with each club making its own choice whether or not they would allow it.

I have to be honest, having followed Brentford in the lower leagues for over 40 years, I haven’t really analysed too hard what has been going on in the Premier League, as I have been too busy keeping tabs on what was happening in Scunthorpe or Lincoln to take notice.

But you’re a good side and I think Klopp is a don.

I was glad when you won the league a few years ago to break up the monotony of domination by the Manchester teams and I’ve got some good Liverpool mates so I wish you well (except against us now of course).

I’ve put you down for third. Actually, I haven’t put you down, my daughter Bella has as I have no idea!