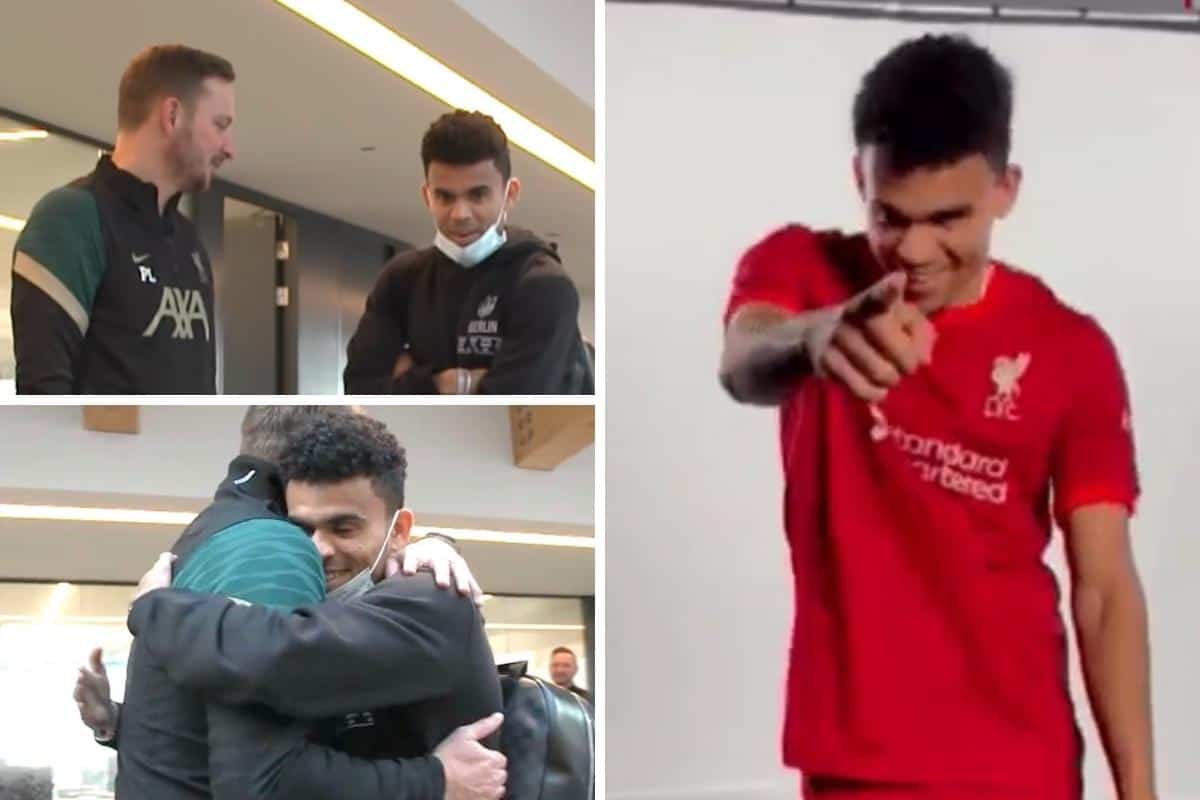 Luis Diaz‘s Liverpool journey is underway after arriving on Friday to a welcoming reception from his new teammates and coaches, which included plenty of hugs and even dance moves.

The 25-year-old was left feeling “very proud” after taking in his new surroundings at Kirkby after arriving via Paris as he attended a work permit hearing and awaited his UK visa.

After landing on Merseyside and ascending the Kirkby steps, Diaz was greeted by Jurgen Klopp and received his first trademark hug, before then meeting assistant manager Pepijn Lijnders who spoke in fluent Portuguese.

Both Jurgen and Pepijn will have lofty ambitions for the Reds’ new forward and Diaz himself is “really happy to be here sharing that experience” with Klopp and his staff.

His first time in the manager’s office quickly followed before it was then time to meet some of his new teammates, with Andy Robertson more than happy to embrace a winger he is to get to know well.

Although, the Scot acknowledged his hug was “not quite the Klopp hug” – it truly is in its own tier.

The likes of Virgil van Dijk, Trent Alexander-Arnold and Ibrahima Konate continued the defensive theme in the halls and in the changing rooms as the whirlwind start to life as a Red continued.

Media duties, including some dancing feet, were then in order as Diaz donned the full Liverpool kit in a glimpse of what is to come, potentially as soon as Sunday against Cardiff.

Klopp did not rule out his new signing featuring against the Championship side from the bench, but his first two days will be key in making that decision.

Diaz then changed into something a little more comfortable for his first official club interview and training session, the latter he did as part of an individual programme in the gym and outdoor pitches.

No doubt an exciting but overwhelming day, Diaz insisted he is “ready to help out my team and do my bit and contribute,” adding that he will “be ready to go whenever.”

Diaz is raring to go, Klopp likes “pretty much everything about him” and now all that is left is to get him out on the pitch to truly get his Liverpool career underway.

The 25-year-old is expected to take part in full team training for the first time on Saturday.