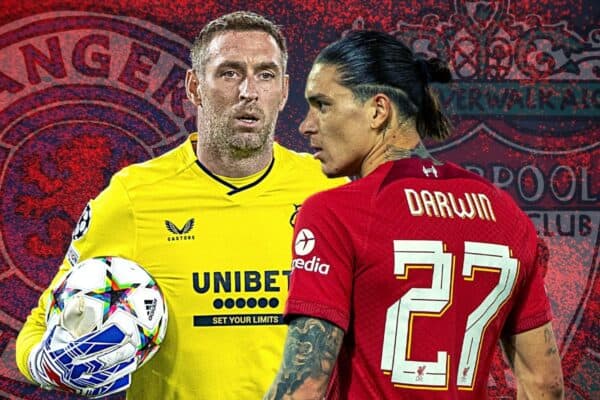 10 key things to know ahead of Rangers vs. Liverpool

Liverpool take on Rangers for the second time in just over a week on Wednesday evening, knowing victory would put them one point away from qualifying for the Champions League knockout stages.

The Reds’ win over Giovanni van Bronckhorst’s side was a relatively straightforward one at Anfield last Tuesday, but Jurgen Klopp has acknowledged that facing Rangers at Ibrox is a completely different challenge.

At the halfway mark in the group stages, Liverpool are second in Group A on six points, three behind leaders Napoli, who have won all of their European matches so far this season. Here’s 10 things you need to know ahead of our latest Champions League encounter.

1. A big occasion at Ibrox

This will be Liverpool’s first-ever competitive game at Ibrox.

Their previous friendly meeting at Rangers’ home ground came in 2011, when a side led by Kenny Dalglish fell to a 1-0 defeat in a mid-season practice match.

There was a fiery atmosphere between both sets of supporters at Anfield last week, and we can expect much more of the same in Glasgow on Wednesday evening.

2. A decisive game for both sides

Liverpool know a win here will take them one point away from securing their place in the Round of 16, with two games still to play.

A defeat in this game for Rangers will end their hopes of qualifying for the knockout stages.

The Scottish outfit are yet to score a single goal in this season’s competition, and will be determined to put that right here.

3. How did Rangers get on at the weekend?

Things are going pretty well for the Gers in the SPFL.

After their 2-0 defeat at Anfield last week, Van Bronckhorst’s side bounced back with an emphatic 4-0 victory at home to St. Mirren, a result that keeps them within two points of league leaders Celtic.

There was a brace for forward Antonio Colak, who was only on the bench in last week’s meeting, but is now up to 13 goals for the season. Don’t be surprised if the Croatian is given the nod over Alfredo Morelos this week!

There were no fresh injury concerns to come from the game, meaning their squad should be very similar to the one that featured on Merseyside last week.

4. Changes on the horizon for Liverpool?

When asked to explain why he named the same lineup against Arsenal on Sunday, Klopp acknowledged that he would “have to” make changes against Rangers anyway.

And rotation is even more likely given the fresh injuries Liverpool have sustained in recent days.

The likes of Joe Gomez, Ibrahima Konate, Fabinho, James Milner and Roberto Firmino are all in contention for starts at Ibrox.

Here are two possible lineups the Reds could go with.

5. What’s the latest on Diaz & Alexander-Arnold?

Mixed. Luis Diaz is likely to be sidelined until December with the knee injury he sustained against Arsenal on Sunday, but it’s claimed the Colombian does not require surgery.

There’s better news for Trent Alexander-Arnold, who was forced off at half-time at the Emirates after a nasty roll of the ankle.

Liverpool are hopeful that his injury is not serious, and the right-back could be back in action before the end of the month.

However, losing two key players during such a hectic period of the season really is far from ideal.

As if the Diaz and Alexander-Arnold setbacks weren’t enough, two other injury worries emerged on Tuesday.

Reports suggest Joel Matip will be out for two to three weeks with a calf injury he picked up against Arsenal, leaving Liverpool without two of the four defenders they’ve lined up with in recent weeks.

Elsewhere, Calvin Ramsay appears to have picked up another issue, having been left out of the Reds’ squad at the Emirates and not involved in Tuesday’s training session.

Looks like Gomez and Milner will be needed at right-back in the weeks to come!

7. Two players back in training

There was a surprise in Tuesday’s session at the AXA, with Alex Oxlade-Chamberlain pictured warming up with the team.

He hasn’t been seen since sustaining a serious hamstring injury during the club’s pre-season tour of Asia, but now looks to be nearing a return to action.

It should be noted, though, that Oxlade-Chamberlain will not be able to play a part in any of Liverpool’s remaining Champions League group games, having been left out of the initial squad for their European matches in September.

Meanwhile, Andy Robertson has returned to full training and could be involved at Ibrox. Here are the 23 players that were involved in the final session before the trip to Glasgow.

Mohamed Salah could equal a record with a goal in this match. He would join Didier Drogba (Chelsea) and Sergio Aguero (Man City) on 36 goals scored for a single English club in the Champions League proper.

He does have 36 in total for Liverpool, but one came in a qualifier.

The 38 goals Salah has netted in total from the group stage onwards is the joint-18th highest by any player in Champions League history. Only Drogba (44) has scored more among African players.

Slavko Vincic, from Slovenia, will referee this one.

Liverpool are unbeaten in the three games he has taken charge of, winning both away from Anfield.

He was also the referee for Rangers’ Europa League Final defeat last season.

Liverpool’s trip to Arsenal is being shown live on BT Sport 2 and BT Sport Ultimate in the UK, with kickoff set for 8pm.

If you’re not able to watch, you’re more than welcome to join Sam Millne on This Is Anfield’s matchday blog.