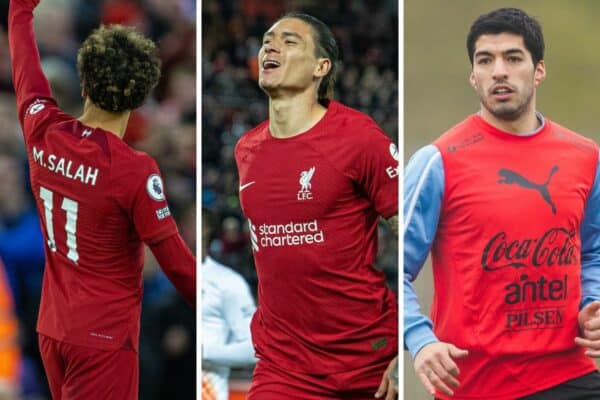 In today’s Liverpool news round up, Jurgen Klopp explains the potential of a Mohamed Salah and Darwin Nunez strike partnership, while Luis Suarez has sent Liverpool’s new Uruguayan forward an encouraging message.

Can Salah and Nunez play together up top?

It was a partnership we saw towards the end of Liverpool’s win over Man City, and many expected it to be the pairing Klopp would start with against West Ham on Wednesday.

However, Roberto Firmino‘s selection means the boss is yet to start both Salah and Nunez together in the 4-4-2 formation he has used in recent weeks.

With Firmino and Nunez starting centrally, Salah was moved back to the right-hand side of Liverpool’s attack, but with four goals scored as a striker against Rangers and City last week, you could argue that the Egyptian is best suited to a role up front in this system.

In the closing stages against City, Salah started just behind the ex-Benfica man, and that may be the way to go if Liverpool are to use him and Nunez in central areas.

Speaking after the Reds’ win over West Ham on Wednesday, Klopp discussed the possibility of starting both together up front, suggesting it is a combination they are still working on.

“There’s a chance we play with Darwin and Mo in the centre – that would be a high-speed combination,” Klopp told Viaplay.

“But we need to get there somehow. We are still developing this kind of system and we have to figure out how it is best for the specific game.

“Mo can play 10 positions and he was constantly in the centre and finishing situations off. He was unlucky here and there, but it’s no difference offensively – defensively it’s slightly different.”

Could a Salah and Nunez front two be tested against Nottingham Forest on Saturday? Time will tell.

? The interview we've all been waiting for…

Would love to see more of this!

When two Premier League managers interview each other before a match… ??#PLonPrime pic.twitter.com/Qu5K6gawLo

Arsenal face PSV in the Europa League, while there are also games in La Liga and the Women’s Champions League.